8 August: Overcast sky. At six thirty, a temperature of 18 3/4°R [74.2°F, 23.4°C]. Dreidoppel went hunting and brought back some interesting birds: Icterus baltimore, Columba carolinensis, Turdus migratorius, Muscicapa ruticilla. Mr. Bodmer also brought some with him. He sketched these; afterward he completed the drawing of an old female bullfrog, of which I had obtained a large number and compared and described the different genders. All these frogs, whose croaking, as a rule, is always heard, although more so in spring, were now silent, and when my windows were opened, I heard only the piping sound of the gray tree frog (Hyla squirella) in the bushes near the houses of neighboring Bethlehem. It rained heavily today [Page 1:57] and was very warm besides. All the windows and doors of the houses are open, even late in the evening. Perspiring bodies catch cold easily as a result of this, and today that is just what happened to us. 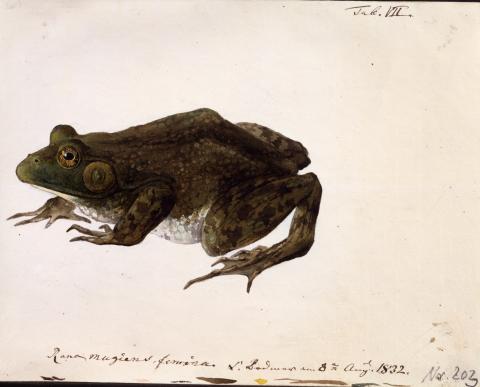