18 May: Early in the morning, beautiful, calm, bright sunshine. At 7:30, 64°F [17.8°C]. Dreidoppel had gone on land early and had obtained the mouse with the white belly (Mus macrocephalus in my Zoological Diary), which made its home with a big young male in an old tree trunk. In the willow thickets, he found a striated warbler with [a] black crown (Sylvia striata Lath.) and shot it.

After we had eaten breakfast, we had the pleasure of seeing the first buffalo over on the hills. There were three of them—bull, cow, and calf—and we observed them with the telescope. The boat was sent out with Mr. Sanford and a few hunters to stalk and hunt the big animals. The young Englishman, Ashworth, accompanied them.[Page 2:82] They rowed down the river and landed in a ravine a few miles from the bison; we observed their movements from the ship. The animals finally went over the hills; we lost sight of the hunters.

Now I went hunting. In the willow thickets, I shot a rust-eyed vireo (Vireo olivaceus Bonap.) [and] a Sylvia striata Lath., which was exceptionally abundant. Saw Fringilla erythrophthalma, several warblers, flycatchers, finches, the iridescent blackbird, a sparrow hawk, etc. Someone found the cast-off skin of a snake and the eggs of a bird of prey. At twelve o’ clock, 68°F [20°C]. The heat was tempered by a pleasant wind. Beyond the willow thicket along the bank stood individual shady, tall trees: oaks, ash, Celtis, Ulmus. Here most of the birds lived in the tall plants, thickets, and the high grass. Redheaded woodpeckers were unusually numerous. Coluber proximus was brought in. At another place a different snake was shot.

In the afternoon I went onto the prairie; I shot [a] Sylvia aestiva. In a dark, shady hollow along the Missouri, [I] saw beautiful plants, including beautiful oaks that had finished blooming. On the edge before them, everything was covered with a nice blue and violet-red vetch [— —]; and [there were] dense thickets of a low rose (Rosa [— —]) with whole clusters of round, rather small fruits. I saw [a] Coluber flaviventris but could not catch it; it crawled into the hole of a stump. On a steep slope of a hill nested a Cypselus, probably Cypselus pelasgius, which I did not get either.

When I came back, the hunters were returning. They had shot a large antelope and numerous prairie dogs (Arctomys ludoviciana), all of whose heads were missing, however. [Also] a gray eagle. The antelope was large; it had been cut up on the spot, but the skin was now losing hair exceptionally fast. Mr. Sanford brought me a live Coluber eximus. Mr. Bodmer went out later; he shot [a] Hirundo fulva Viell., with its rust-red throat and a pale rust-colored abdomen, the nest of which I had obtained yesterday. [He also] brought an especially beautiful plant with a very large white, fragrant flower ([— —]) that grew in a dried-out gully in the prairie, though still in somewhat swampy soil.M67The more interesting plants of this region also include Cactus opuntia, which occurs in some places but was not yet blooming; on the last morning of our stay at this place, I found the species cited by Nuttall under the name [Cactus] mammillaris, which, however, was likewise not yet blooming. He had pursued an owl for a great distance and had wounded but not captured it.

The evening was very pleasant today, though somewhat cool. During the day the mosquitoes (Tipula) on the prairie and in the thickets were so unbearable that one could hardly load a gun; in midsummer this vexation is said to be very bad here. 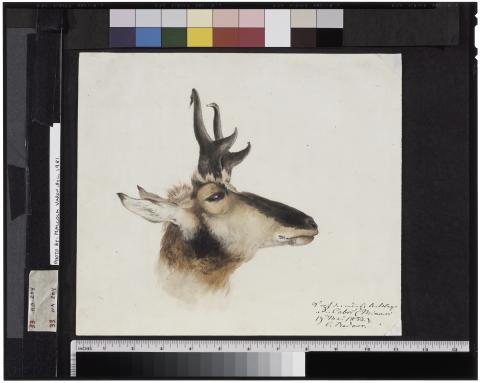