17 May: Early in the morning, beautiful weather; bright, warm sunshine. At 7:30, 63°F [17.2°C]. We steamed past Cedar Island and had a complete overview of this beautiful island, which is several miles long; its tip and end are pure cottonwood forest, the middle almost wholly cedar forest. The animals that we observed on this island are, in addition to Cervus canadensis and virginianus, which sometimes stay there, Mus [——],M63 See Zoological Diary, no. 39. Cathartes aura, Corvus corone,M64 According to American zoologists. As I have already stated earlier ([Tagebuch], vol. 1), it is probably different from the European crow [and] has a different call. Picus auratus, Turdus rufus, T. aurocapilla, Muscicapa crinita, [M.] ruticilla, Sylvia autumnalis striata, Fringilla erythrophthalma, Columba migratoria and carolinensis, Anser canadensis, Anas sponsa, Tringa, etc.

The strange hills along the banks continue: to the right of us, on the bank, they are lower and more similar to each other than to the left, and completely green; to the left, more broken, alternately with strange yellow and green dots, [and] singularly shaped. Beyond Cedar Island, sandbars with wild geese on them. To the right, prairie with much wood on the edge. We saw six antelope running on the left bank. Snags along the right bank. The forest along the riverbank is wild and devastated here; the old cottonwoods are stag-headed. To the right in the forest, turtledoves and big blackbirds. On the sandbar, a heron (Ardea herodias). Sandpipers near the bank. Little water; the boat takes soundings. On the left bank, bluffs follow (they seem to consist of argillite, clay, and sand); in the ravines, small thickets mixed with cedars. On the right bank, prairie with tall, sparse timber; to the left, steep bluffs; before us, a large island with willow and cottonwood. To the left, a hill with many holes, probably [made] by prairie dogs. An antelope, the first one that I saw clearly, stood not far from us near the hills. Its back was brown, belly and hindquarters completely white. It seemed frightened by the noise of the steamboat; it was startled, stopped, and trotted over the hill. The Indians do not shoot as many of these animals as buffalo but like to make their leggins from the skin.

Somewhat farther on, a wild ravine with sturdy, dry cedars. Before, the bluffs on which the buffalo berry grows everywhere. Lack of water. We repeatedly strike bottom; the lead is continually tossed out. To the left now, before the bluffs, a wild and shady forest of cottonwoods and willows, some of them snapped and broken; here, Picus erythrocephalus and several birds. Somewhat farther [on], we saw two antelopes running across the prairie. In the river, several islands surrounded by sandbars and many snags; the first [island] badly eroded, a picture of devastation. Willows and cottonwoods cover the larger island and the right riverbank.

Soon a somewhat flatter region [lies] before us; on the right bank, steep bluffs made of argillite or sandstone. Here and there with towerlike, rounded-off column formations, often broad [with] ravines in which there are usually thickets and a gully or run (all of which, however, are now dry). 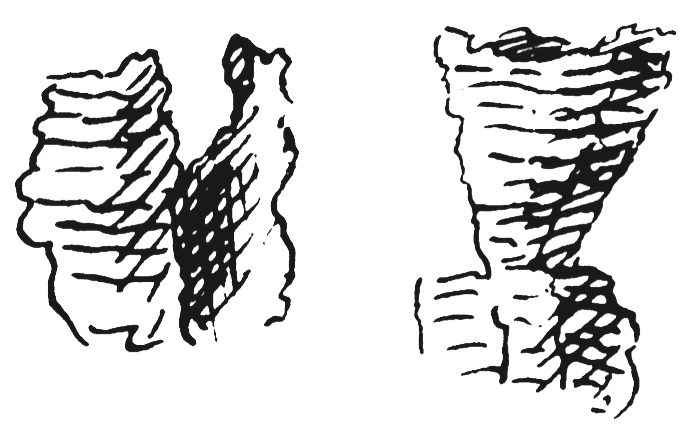 Farther on, before the bluffs, many thickets and tall cottonwoods. Picus erythrocephalus [is] very common here, as well as the dove (Columba carolinensis)and the big blackbird. From the prairie hills on the right bank, the pleasant flutelike whistle of the large yellowbreasted Sturnella reached us on the ship; this bird occurs on all these prairies. We are stranded; the boat is sent out to take soundings. Soon thereafter, [we received] such a jolt that we almost fell over. On the bank along the bluffs, we had had altogether singular towerlike formations, which had been eroded by the water in a strange way. Thus, they stand there totally isolated. To the left along the bank, extensive sandbars before the landscape consisting of oddly shaped hills. To the right, the fringe of cottonwoods along the river now has a dense underwood of buffalo berry bushes. Redheaded woodpeckers, turtledoves, and several other birds are[Page 2:81] very numerous there.

Now there is an island with a tall forest to our right; we sail left across the river. On the left bank there are many withered old trees, some of them cedars. Everywhere redheaded woodpeckersM65Picus erythrocephalus. in great numbers, which I had almost never observed along the lower Missouri. Now steep bluffs appear with swallows’ nests in them and several swallows in the air. We remain motionless for a long time. At twelve o’clock, 72°F [22.2°C]. The bald eagle,M66Aquila leucocephala. with its white tail, streaks before the forest. After our noon meal, the boat returned. [It] had not found more than 4 feet of water; nonetheless, an attempt was made, and we sailed to the right across the river and along the sandbar. Here there was tall cottonwood forest in which bald eagles had nested. On the left bank are long, extended, low bluffs; the valleys lying between them are more flattened and gently widened.

Somewhat farther on, our boat found even less water; we therefore secured the steamboat to the willow bank and undertook our excursions into the prairie. After I had worked my way through thickets of dense young willow and cottonwood, where I found the big tracks of elk (Cervus canadensis) imprinted, I entered the level prairie, which extended to the hills 400 to 500 paces away. It was covered with nice, thick, fresh grass, and everywhere there were clusters of other plants in it, some probably a bushlike form of Hypericum. Then, rather far apart from one another in the small ravines of the hills or where there was more moist soil, [there] were copses of Celtis, Ulmus, and the like with roses and other understory, all of which, however, were not yet in bloom. Here I found turtledoves in pairs, redheaded woodpeckers on individual old trees, the towhee bunting, [and] Fringilla erythrophthalma in the thickets of the prairie, as well as Fringilla melodia and several others with which I had not yet become acquainted. The big lark (Sturnella) was also here. In the hills I saw dens, probably of badgers, and smaller holes, which a species of striped ground squirrel, probably a suslik( Spermophilus), is said to make. I found three new species of plants in bloom, one of them with nice, light vermillion-red flowers [——], the other one with violet-colored flowers, undoubtedly a Hedysarum. Our men crossed the prairie in all directions; shots rang out everywhere, and bullets whistled through the air. Many were looking for the pomme blanche (Psoralea esculenta), which grew abundantly here. The wild pigeons were often walking on the ground in the grass to find food; many birds generally quickly slipped away into the bushes if one came too close to them.

I returned to the ship before sundown; the evening was very pleasant. Dreidoppel arrived later and brought the nest of a rust -bellied throated swallow (Hirundo fulva Viell.) with six roundish white eggs, which he had found in depressions, or sunken holes, on the prairie hills. With wet clay the bird had made an attachment to the slanting wall on which an attractive, round nest, open on top, had been built from flaxlike threads and bits of plants; [it] had a smooth, very round opening inside. Whoever went out brought back several interesting plants. Evening rather starlit, somewhat cool.