12 May: Beautiful, clear morning; there is said to have been hoarfrost.M49 At 7:30, a temperature of 53°F [11.7°C]. The Indians appeared, wrapped in their buffalo hides, and the chief was sketched. Yesterday they had set up their [tipis] in the tall forest beyond the river, before the prairie hills, and the rest of their band was still there; their actual place of habitation is higher upstream, and we will discuss it later.M50They had lived for a rather long time among the Omahas, from where they have now come. At eight o’clock or 8:30, the Assiniboine moved backward in order to bypass the sandbar; an attempt was to be made to get through the shallow places. It went far back. Messrs. McKenzie and Sanford were on board. On the Yellow Stone, we stayed behind; this was very agreeable to us, since Mr. Bodmer wanted to finish sketching the Indians. A large catfish had been caught.

The place where we now lay at anchor afforded an interesting view: all around us the beautiful, pleasant region [and] the beautiful, broad river in the brightest splendor of the sun; many people on shore; one steamboat at anchor, one steam-boat in motion, and a large keelboat on the river. Everywhere this isolated wilderness [was] full of life. On the bank we saw the unique-looking Indians wrapped in their buffalo hides, whom Mr. Bodmer sketched as follows.M51Ponca Indians.

Dreidoppel went out with [a] gun. Later the chief spoke with the agent, Major Bean. The point of all these discussions is always that they want to receive various things as gifts from their great father (the president). Thus they demanded, for example, hoes for cultivating the fields in order to raise corn. The chief’s propriety during this speech was excellent. His noble face with his fine white teeth had a manly expression. He kept his right shoulder and often his entire upper body free, [and] he vigorously gesticulated with his right arm and hand.

His language, too, did not sound unpleasant (see the language samples on the following page, where one will note immediately the similarity with the Omaha language). He was not wearing his leggins. His calves were rather sturdy and marked with several short, crisscross, bluish black stripes (fig. 8.28); otherwise they were neither tattooed nor painted.[Page 2:69] Some of these Indians had been inoculated against smallpox on their upper arms.M52The previous year Major Bean had taken a doctor among them who had inoculated 2,600 Indians from different tribes. Many had no confidence in this remedy and remarked [that] they were [currently] healthy; if they became ill, they would be willing to undergo the operation. The chief had a large round scar on his upper arm, which had been burnt with a pipe, a self-inflicted penance on the occasion of the death of a relative. They received tobacco, powder, lead, and the chief a red woolen blanket as presents.

Later Mr. Mc Kenzie reproached these Indians for planting too little corn and supplying too few hides; there was nothing one could buy from them. To this the chief replied [that] he could not properly supervise his people; there was no unity among them, because they lived too far apart and hence could not duly render him obedience. Since the weather was now very warm, several had no leggins on, just moccasins, but old Hä-Chá-Gä was wearing them, and they were made with large folds or cuffs hanging down over the moccasins.

At twelve noon, 67°F [19.4°C]. Toward noon the keelboat Maria anchored beside our Yellow Stone; the fathoming boats returned. Mr. Bodmer had had time to make two very accurate sketches of two of the Indians. Dreidoppel returned emptyhanded; several species of plants were the sole take of his excursion. He had gone far across the beautiful prairie hills but had not seen any animals of importance other than several more pairs of gray Numenius.[Page 2:70]

The crew worked intensely until about one o’clock to lighten the steamboat by transferring part of the cargo to the keelboat Maria lying beside it. About two o’clock we weighed anchor and moved backwards and around a sandbar in order to navigate upriver along the other bank. The vessel was carried downstream so swiftly by the current that the Indians, who had never experienced anything like this, became dizzy and bent over or sat down. After twenty minutes or a half hour, we reached the sandbar before the coastal forest to the left, where the entire band of Ponca Indians was assembled and awaited us.

It was amusing to see how the colorful throng came together, wrapped in brown hides [or] white and red blankets, otherwise naked and dark brown. The small children with fat bellies and thin legs, dark brown, their bows in hand, ran along the bank or cowered down like little monkeys. Gravely, the men strode along with [a] tomahawk (they call it Manse Mansepäschingá) or battle-axe in hand. In the tall, shady cottonwood forest behind the sandbar were the Indians’ lodges, of which I counted six; one could not see all of them. They were conically pointed and yellowish in color, [these] so-called skin lodges, or leather huts, made from bison hides.

When we approached the sandbar, our three Indians were put ashore by boat, and the boat brought back an otter pelt and a beaver pelt. As the steamboat continued on, the Indians all returned to their lodges. A few dogs, including a big one with the shape of a wolf, ran with them. To reach their lodges, they had to go through a body of standing water along the sandbar. The interpreter, too, did not pause long to reflect; he immediately ran through it.

The river soon became very narrow, and there were many snags in it. We reached a place on the left bank where the crew of the Assiniboine had cut wood and had started a fire; some of our crew were also there. The forest and the prairie were ablaze; for several moments one saw a flame about 100 feet in height; and a whirlwind had created an enormous, tall, thin, round, columnlike mass of smoke, which, in a very odd fashion, rose in gentle curves up to our zenith.

We halted here for a while to take on wood. After some time we came upon bluffs to our right along the river; farther on, low-lying land with cottonwood and willow. To the left, a 15-foot-high bank with extensive prairie, behind which rise gray-green hills with various kinds of ravines and ledges. Some have a bare appearance, [and] there are only small thickets in their hollows. Dry grass still covers these hills, because no one has set fire to them. Somewhat farther away the front section of the hills approaches the river; it is beautifully green, like a carpet, because the Indians have burned off the old grass. At its base this section of the hills has a beautiful band of forest, which is mixed with cedar and set off here and there by yellow rock bluffs; it recedes in a diagonal line from the river.[Page 2:71]

For part of the way, the forest covers the left bank of the river with old trees, which, though not tall, nevertheless form a dense, dark wilderness intertwined with very many vines (Vitis). Large doves (Columba migratoria) fly in it. Soon prairie appears again. The yellow hills still have yellow grass. Somewhat later, some prairie to the right and hills with bluffs behind them. Soon, to the right, bluffs again along the river; they have little brush, most of it in the gullies. Manuel’s Creek —named after the Spaniard Manuel Lisa, who first traded here (see Major Long’s Expedition)—empties immediately behind the steep bluffs. Dougherty was often with him. Toward evening we have the Assiniboine ahead of us, which we catch up with in the darkness. We halt near Bazile Creek, where Poncas formerly lived; [their] graves can be found here on the hills in large numbers. Earlier, when it was still day, snags had penetrated our right wheel and damaged it seriously. The captain of the Assiniboine and Mr. Sanford, who spent some time on his ship today, spent the evening with us. Evening very cool. 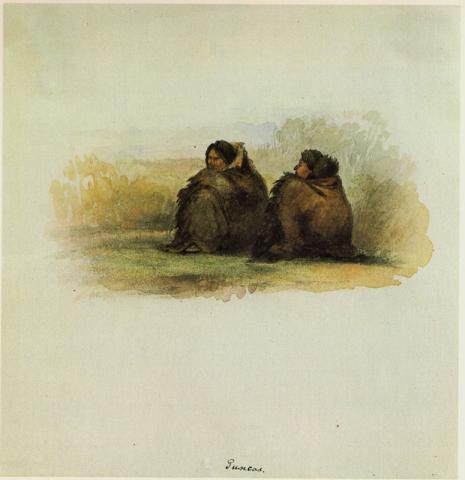 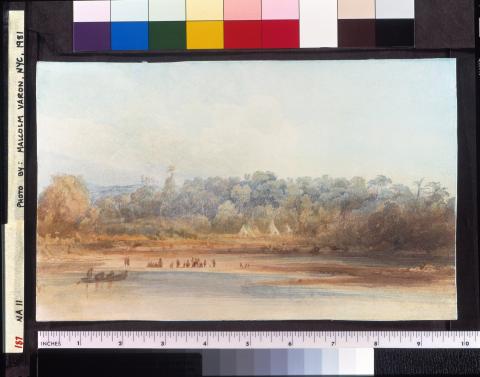