11 May: In the morning, good weather, slightly overcast sky, some wind. At 7:30, 53°F [11.7°C]. Early in the morning we had an extensive prairie to the right and also to the left, but not as much. Here and there to the right along the bank, occasional willow thickets. Two prairie hens (Tetrao cupido) sat on the bank and were not shy; they did not fly away at all. At the place where the prairie ended (that is, at the bank), the Jacques [James] River, which one cannot see, empties behind a sandbar.M39Upstream on this river one finds the red pipestone on a small tributary river or branch creek that the Indians call Pipe River. The stone is found in large quantities in a hill chain several hundred paces from the bank. The Indians frequently go there to get it. On the St. Pers. River, the most beautiful and least expensive pipes of this kind are made.

To the left on shore, a strange limestone hill appears like a devastated turret with rubble and transverse strata. On the summit grow thickets in which a great many withered trees appeared. Two cranes flew past above us; thus, they nest here. [Page 2:66] The bottom was full of sandbars; the boat went out to take soundings. Meanwhile we received severe blows and became wedged in the snags. One came under the ship and lifted it, whereupon the ship drifted into a second one, which broke into pieces. Before us, an extensive prairie; along the river, a few stands of tall trees; in other places, willow thickets and woodlands.

To the right we now reach a very extended prairie, where we saw several antelope on the gently sloping green hills. They quickly hurried away over the elevation.M40The first antelope (Antilope furcifer). Farther on, beautiful green hills to the left, before which grow old trees with thick trunks and broad, knotted, deformed branches; hills like these also are now appearing to the right. On the bank to the left, a green area very picturesquely covered with shady trees, then steep limestone bluffs, in the ravines of which stand short forest and dry trees mixed with conifers. The yellow bluffs —which, according to Lewis and Clark’s map, are called Calumet Bluffs— have deep gorges [and] are ash-blue below and yellow above. [Then] a large island in the river: Sego Island, according to Lewis and Clark.M41Now called Bull Island, Isle au Boeuf. Here we lack water.

We let the ship drift back as far as the Calumet Bluffs, on which one now sees buffalo berries, red willows (Cornus sericea), and other shrubs nearby. We sail around Sego Island. We see a white goose (Anser hyperboreus). To the right follows widely extensive, soft green prairie in which there is a single stand of tall trees. Farther on, this prairie has a steep bank on which there was a wildly scenic gorge with a brook and tall trees, especially cottonwoods. To the right along the bank, a strip of cottonwood forest appears, [with] many trees burned black. On the left bank, one sees picturesque prairie hills with bluffs and bushes in the distance.

After ten o’clock we halted at the prairie to the right near the forest; wild doves fled before us. Wood is cut here. We found some very beautiful plants, the small flesh-red Oxalis [—] with knobby or bulbous roots [—]. In the gorges, ash, Prunus padus, cottonwood, elm, and, as it seemed, box elder and hornbeam. Mr. Bodmer shot a shiny blackbird (Quiscalus versicolor). Thrushes and several other birds inhabited the wooded ravines.

From here we sailed on after an hour. We reached White Bear Bluffs (according to Lewis and Clark), which Mr. Bodmer drew. The area all around was most scenic: magnificently green hills far and wide with thickets of willow and cottonwood before them. At noon, 63°F [17.2°C]. After lunch we suddenly saw a steamboat before us; it was the Assiniboine, which we reached half an hour later. It did not have enough water to proceed. This boat had a much larger, lighter cabin than ours and no passengers at all. The crew had killed a female bear and had two live cubs on board. Yesterday they had seen elk, and they also had several nice fox pelts and a beaver skin on board. While we were still on the ship [and examining it,] Indians made their appearance on the opposite sandy bank, probably fifteen to twenty of them. People had seen them coming, riding down over the hills. No one, however, seemed inclined to send them a boat or to sail over to them. We therefore had to content ourselves with looking at them with the telescope.

The prairie beside us was damp, and there were puddles and mud holes in it.[Page 2:67] Beyond it one could see a along a tributary of the river long row of interesting bluffs extending along it, of which the sketch here provides just an idea of a small section. They extend far in a long line, and before them there is only a gradually sloping hollow, which indicates, however, that the river once flowed by here.

One also sees on the steeply intersected hills, which have yellow calcareous walls at their peaks, [evidence] that they were cut off vertically in this manner by the water. We made excursions onto these prairies and found several varieties of plants with long turniplike roots: one with nice yellow flowers [——], the other with beautifully violet-red ones [——]. The big yellow-breasted lark (Sturnella)M42Sturnus ludovicianus. occurred individually everywhere on the prairie; it uttered its short, chirping, luring call, and then a pleasantly flutelike, albeit short, melody. In addition we saw very few other birds. Dreidoppel saw eight prairie hens, a variety of curlew (Numenius), and a bird related to the totanus, which, however, he was unable to shoot. In the extensive prairie, we found skeletons of bison, especially a very large skull, which, however, was not quite complete.

When I returned home, I found, to my great delight, three interesting Ponca Indians on our ship: the chief of the tribe, his brother, and still a third man. All of them [were] tall [and] well built, with very pronounced features, high cheekbones, large aquiline noses, fiery dark brown eyes, their hair hanging down to and even over their shoulders—[in] the case of the chief, somewhat shorter; he wore it in back twisted together in a braid. They were completely naked above the waist, except for a decorated band around their necks. In [the chief’s] earlobe [was] a large opening in which [he] wore an ornament made of mussel shells (wampum).

Around their wrists each one had a narrow armband made of white metal, and apart from their very simple leggins, they wore only large buffalo hides; the chief, however, was in a white woolen blanket. The chief’s name was Schudegácheh ('ch’ velar), that is, "He who smokes."M43The French [call] the chief Labucan. His brother was called Passítopa (which means the number four),M44Mr. Bodmer drew both men. Passítopa was well known because he killed an Indian who attempted to kill a white man [staying] with them. and the name [——].M45The third Indian, a brave warrior, was Hä-Chá-Gä, or Deer Antlers with Velvet.

The Poncas are originally of the same tribe as the Omahas and also speak the same language.M46Lewis and Clark call them Poncaras; now they are generally called Poncas. (vol. 1, p. 66) The French say “les Pons.” Those travelers call the creek along which these Poncas live Poncara Creek (ibid.). In Long’s Expedition to the R[ocky] Mountains, too, this name has been adopted). (vol. 2, p. 120) They have been separated from them for a long time and live on both sides of the Running Water [Niobrara] River (l’ Eau qui Court). Like the Omahas, they formerly lived in earth lodges at the mouth of the river. But their enemies, the Sioux, or Dacotas, and the Pawnees, destroyed their lodges, and since then they have adopted the way of life of the Dacotas, that is, they move about more and live in leather [tipis]. Their dress and appearance are almost identical with [that] of the Omahas. They have suffered greatly from smallpox and from their enemies but are said to have been brave warriors. Even now one sees many pockmarks among them. Now they can put no more than three hundred warriors in the field.M47The band referred to here consists of eight lodges now living at the mouth of Bazile Creek, They plant always good corn and probably sell this product to the Dacotas.M48For about three years now they have no longer been cultivating this product; they have been getting it from the Omahas but want to begin [planting] it again.

Major Bean is the agent for these Indians; they came, therefore, to speak with him about certain official matters. In the name of President Madison, the chief had once received from Bean a large silver medallion, which he wore on his chest.[Page 2:68] This man had a fine, manly bearing and an intelligent, thoughtful face. With the others, he smoked the only pipe they had with them, but several pipes soon circulated among all of us, in accordance with Indian custom. The evening was very cool, and several of them did not have any leggins on; therefore we took the Indians, after they had eaten their pork, bread, and tea, [with] which Mr. McKenzie had them served, to our rooms, and they were sketched. One of them presented me with his wooden war club; the other, Passítopa, gave me a pair of moccasins made of elk leather, dyed blackish with the juice of the white walnut. They presented a second fine pair to Major Bean, who later gave [them] to me. Incidentally, these Indians were not armed. The interpreter told us these Indians had been separated from their comrades for a considerable period of time and did not know their whereabouts but presumed that they were hunting at the sources of the Running Water [Niobrara] River. 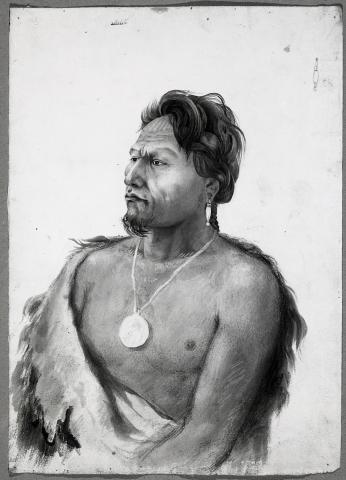 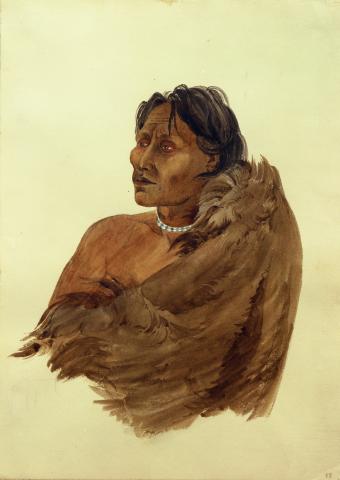 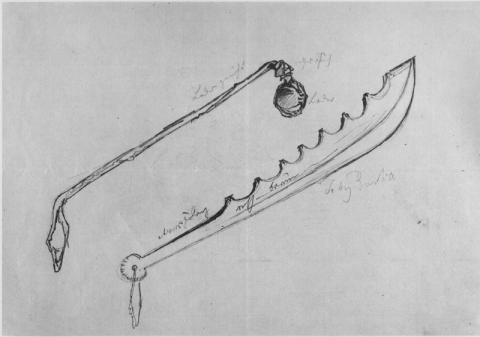 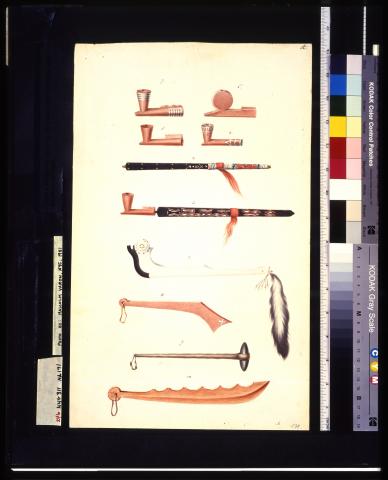