13 May: Early in the morning, slightly overcast sky, cool, some wind. At 7:30, 55°F [12.8°C]. Early in the morning, we passed the mouth of the l’Eau qui Court (Running Water River).M53In American travel accounts, this river is usually incorrectly called Qui Courre River, instead of Qui Court. (See Lewis and Clark, vol. 1, p. 67, Major Long’s Expedition to the R[ocky] Mountains, vol. 2, p. 120, and Brackenridge, Views of Louisiana, p. 235.) Ponca Indians live upstream on both sides of it. Many graves of this people are found on the summits. It is a pretty river. Beautiful bluffs, rounded on top, alternate on both sides of the Missouri. Quite early we saw the Assiniboine before us. If one sees bluffs on one side, then the other is level and has none. Often the hills are a nice green color, often yellowish, depending on whether or not the grass had been set on fire. Individual tall trees or small shrubs stand in the small valleys between them. The cliffs of the bluffs are extraordinarily crumbled and weathered, full of rubble, with horizontal layers and fissures, in which there are rows of swallows’ nests. Impressive washout cut into them. 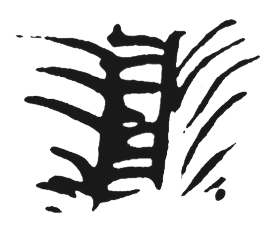 A creek, Ponca River, now empties; it flows diagonally along the hill chain down toward the Missouri. Before the P During the time when the Poncas separated from the Omahas, they built a kind of fort with earth parapets, which they no longer inhabit, a few miles upstream near the river. There are hot springs inland along this little river, just as in several places along the Missouri. To the right near the bluffs, we saw a small spring; here springs are rare and are said to be growing even more [so]. Upstream along the Ponca River there are many prairie dog villages and large numbers of rattlesnakes, which also live in these burrows. It is said [that] they both live together peacefully, but Mr. Sanford thinks otherwise, since he often saw abandoned villages full of rattlesnakes.

To the right, a small creek (actually, a run) without a name empties. In the bluffs to the right are found deep, vertical water-crevices [with] cedar thickets (Juniperus virginiana) scattered individually within them. To the left on the bank, willow and cottonwood forest on low land before the receding hills. To the right before the bluffs lie sandbars. Urubus flew above the green hills. From the ravines between the hills, dry, deeply cut-in runs now also emerge. On the left bank there is level prairie; in the distant background, the hill chain, before which the Ponca River diagonally descends.[Page 2:72]

Suddenly, on the elevated bank of the prairie, we saw three interesting Ponca Indians in buffalo hides, the flesh side outward. On his back each man carried his bow in a special cover fastened to the quiver. One of them had bound his hair together in an erect tuft. Another one beckoned with his hand, and they followed him along the bank. 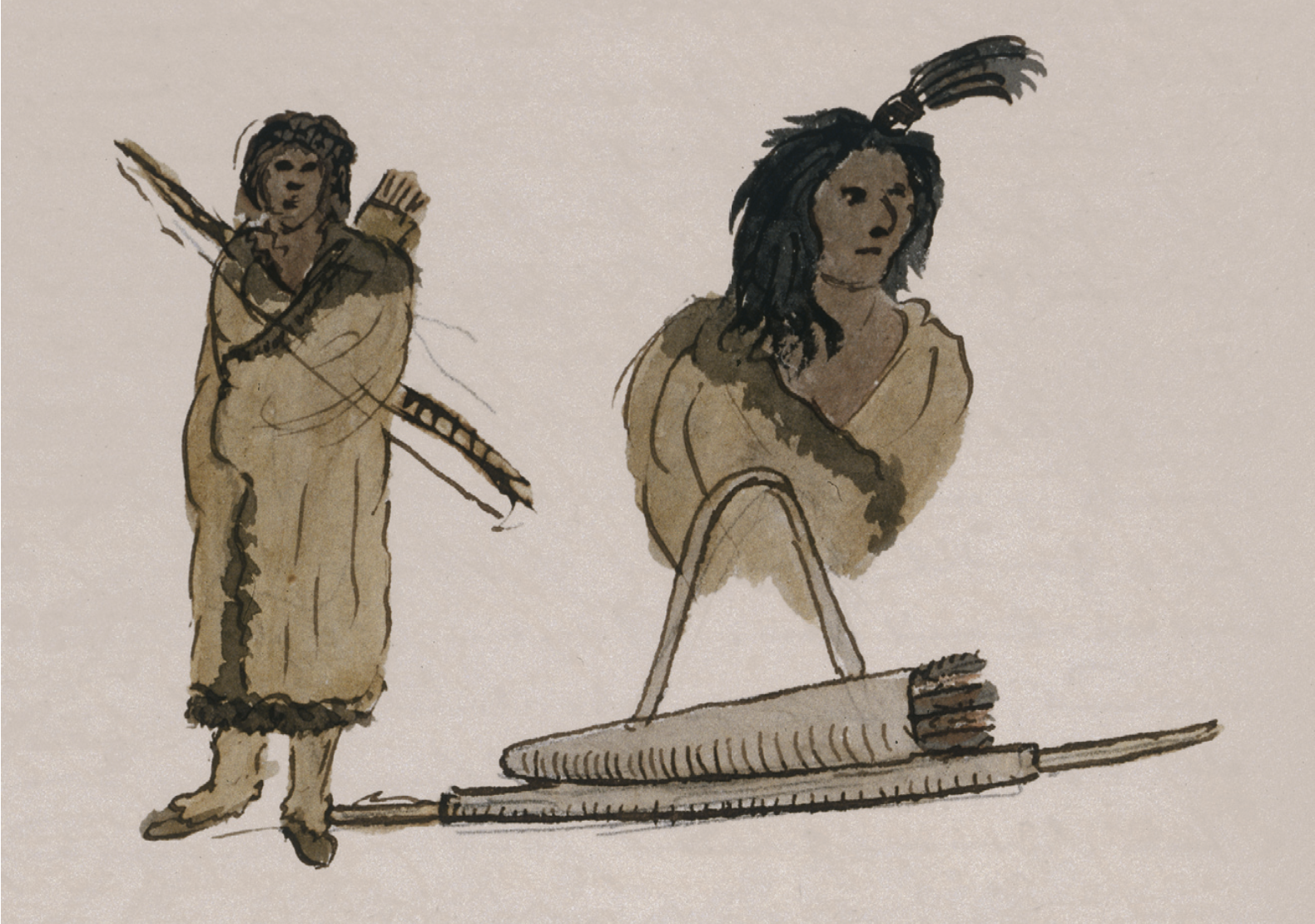 But the boat did not stop, so after a quarter of an hour, there was no longer any hope of getting to know these interesting people better. Some time later we struck bottom, but the ship still continued onward. [Then] we steered straight across the river close to a prairie, the timber border of which consisted largely of withered cottonwoods, some of them burned. Somewhat farther on, a slew empties to the left; it separates Ponca Island from the shore. The island is overgrown with willow and cottonwood. A strong, unpleasant wind has arisen and is driving the air, which is full of sand and dust. Ahead of us the Assiniboine is taking on wood; it lay near a prairie with a fringe of timber, which was mostly dry and burned. We passed it. The timber is low, thick, [and] old; it has stunted, crippled, irregular crowns. Columba carolinensis on the bank. Individual burned trees in the young, beautiful grass produced by fire in the prairie. Near its hills individual snow-white stones lie scattered everywhere. Several fine birds of prey in the air.

We sail along the right, 10-foot-high, steep prairie bank, where there is no forest. Five hundred to 600 paces from shore, the hill chain, with yellow bluffs, extends straight as an arrow across the prairie and gradually recedes from the bank in an oblique direction. Before it there is perfectly beautiful green prairie. On the bank to the left is lowland with cottonwood and willow. Behind [this] the hill chain with yellow bluffs rises; they soon become more beautiful, with many thickets in the ravines [and] before them broad sandbars in the river.

On the right bank, a beautiful forest. Here the sandbars forced us over to the left, but water was lacking; the lead was tossed out, the boat took soundings, and we had a delay of about three-quarters of an hour. The wind was so strong that the steamboat did not properly respond to the rudder. To the left on the bank, we now had the beautiful chain of bluffs directly beside us, [and] we finally reached it. It was regularly divided by ravines in which grew conifers and deciduous trees mixed with short trees. In the horizontal strata beneath the ledges cling large numbers of swallows’ nests, all of which, however, are still empty. Probably the swallows have not yet come this far north. The cedar trees (Juniperus virginiana) are remarkably deformed, often thicker than a man in the trunk, and many of them [are] frequently completely withered. Sandpipers fly along the narrow, steep bank. In all the ravines, one sees pairs of wild doves (Columba carolinensis). The buffalo berries, with their bluish green foliage, grow abundantly on the slopes. On the right bank there was a splendid cottonwood forest. Our firewood was consumed, but we could not get there.[Page 2:73] On the left bank, where the steep bluffs continue, there is no timber, just brush and several cedars. The bluffs are 70 to 80 feet high; we move along them for over an hour and see the Assiniboine behind us. In a ravine, a run [with] nice, tall cottonwoods and thickets along its bank.

Somewhat farther on, we halt about noon to cut wood. Only red cedars were cut; the red, fragrant wood lent a pleasant aroma to the whole region. They were still full of black berries. In the ravine that I entered grew elms, ashes, Prunus padus, Celtis, cedars, Mespilus, Celastrus scandens, Vitis, Clematis ?, buffalo berries [——], Cornus sericea, and others. On the prairie hills [there were] a large number of beautiful plants, [including] one with long, bright yellow clusters of flowers (Stanleya pinnatifida), which we had recently found on the prairie, as well as the wild turnip (Psoralea esculenta) with [its] thick, knobby edible roots, which the Indians eat. We do not see many birds.M54In the ravine below a rocky overhang was the nest of
the black-tailed flycatcher (Muscicapa melanura in my diary), containing completely white eggs. The bird we did not get yet. The bluffs here consist of hardened yellow and light-gray clay.

When I returned home, I found one of the Indians whom we had seen today on the vessel. He carried a bow and arrows in sheaths of hide. His hair hung down to his shoulders and was twisted a little in back to form a queue. He was wrapped in a buffalo hide and held a cavalry saber in his hand. His face was good-natured. He was given powder and tobacco, and after eating, he returned [to his comrades], whereupon we also set out.

In the afternoon the region at first was more flat: alternating low bluffs, the hill chains more flattened off, not so nice and also not so beautifully green. The water was often shallow, and we received severe jolts; various objects were smashed. The hill chains to the left, which rise behind the willow and cottonwood thickets, now have stranger and stranger shapes; many summits [seemed] formed like batteries and flattened off on top like tables. Before us in the distance, the Tower, a round hill, or dome, appears. From the steep gray earthen bluffs to the right, along which we were sailing, we moved over at an angle to where willows and tall cottonwoods formed a border behind them. The Tower grows more and more distinct. To the right in the river, an extensive sandbar; behind it, short willows and cottonwood thickets, [and] behind [them] rise the gentle, pale-green hills.

On the left bank, the hills have a steep appearance when one is close beneath them; they are covered with withered grass and single thickets, probably short oaks. As we approached the Tower, it appeared about 600 to 800 paces down the bank in a ravine, somewhat like this:

On the left bank, a small, deeply cut-in run, where steep, oddly shaped hills stand; one follows the other. Several bison skulls lay on the bank; several small birds [were] in the ravines between the thickets. The hills are now close to the bank but have no bluffs; before them there are frequently thickets.

On the right bank, low-lying land with willows and cottonwoods. To the left along the bank, individual stands of beautiful, tall trees in the bushes. Between the hills one[Page 2:74] occasionally has glimpses into gentle green valleys, in the background of which one sees strange hills lying. Several small runs empty into the river; then follow twisted oaks about 40 feet high, as a sparse forest before the short, strange, hilly banks. To the right in the river extend widely scattered sandbars, beyond them a long row of red bluffs, which in the distance look like an American city of brick. To the left along the bank, much brush in the ravines between the hills.

Picus erythrocephalus was seen several times. On the bank, peculiar woodlands of thick, old, low trees, which are all broken off stag-headed, or without actual tops; this resulted from storms and the cold, severe winters. Along the bank, small, short hills, 40 to 50 paces long; before some of them lie dense dwarf forests. A nice creek empties here: along its bank, rather nice tall thickets; inward, one sees high yellow walls along its bed. Here the soil, like the character of the region in general, is totally transformed: whereas it was completely black and very fertile downstream, here it is already infertile, [and] no one will settle here anymore.

On the hills grow beautiful 40 to 50-foot-high cedars (Juniperus virginiana), shaped as thick as a man, like old spruce trees, many [of them] withered, with dry branches and crowns. This splendid wood is infinitely durable under the ground; after forty years [it is] still unchanged. Later, a nice cottonwood forest, with willows before it, lies on this bank; on the other hand, on the right one, a tall forest of cottonwoods, for the most part killed off by prairie fires. Only a few still have some foliage on top. Prairie hills rise behind this wood.

Toward evening a tree hidden in the water broke our right paddle wheel in two; it cracked violently [and] a thick beam snapped off. On land to the right, a series of quite unique undulating, saw-shaped domes;

on these hills we saw several black animals running, probably wolves. On the right bank [there] followed a beautiful dark forest with magnificent grassy floor, but the trees were not tall; numerous wild grapevines twisted around them. Swallows were flying over this forest. In the evening we put in to the left near the tall forest, then went into it and started big fires while the woodcutters felled trees right and left. Some of the green foliage, mostly from ash and box elder (Acer negundo), fell into our fires, where the green, sap-filled foliage crackled as it was consumed. Vines (Vitis and Rhus) formed coils on the old trees; the ground was largely covered with Convallaria [—]. In the evening, lightning bolts and sheet lightning. 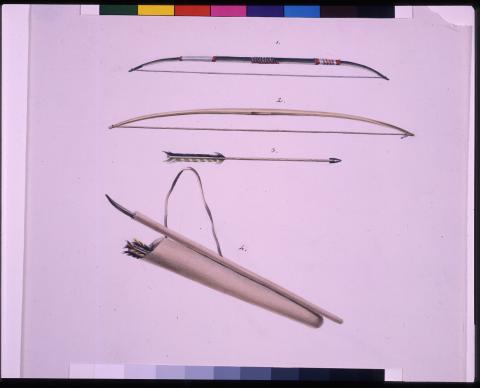 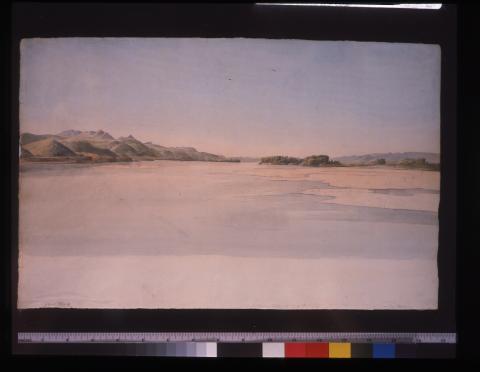