On the morning of 27 April: Overcast skies, brief glances at the sun, strong wind. We remained here until six o’ clock and wood was loaded; then we moved on. To the right along the bank, we could soon see again the prairie of the Nishnabotna. At 7:30, 67°F [19.4°C]. We proceed along the bank to the right. An abundance of black walnut, which no one uses, grows here in the forest. To the left we have Morgan’ s Island, overgrown with cottonwood and a sandbar before it.[Page 2:40] Redbud grows copiously in the forest to the right. On the right bank, the strata were very distinct; good earth, in part very black, alternates with layers mixed with more sand. One also often finds pumice stone in the Missouri along the banks, without knowing [the] places from which it actually comes. Rivers wash it down from the Rocky Mountains, but there, too, no one knows its origin. The Indians use it for scraping their tanned hides. About 8 feet deep inside the bank, a nearly two-foot [- thick], completely black stratum like coal shale. On the bank above in the forest, all the underwood is colored red from redbud blossoms.

We are now opposite the upper end of Morgan’s Island, with a sandy point and large driftwood deposits on it. Mr. Bodmer sketches this island with the separating channel. The channel on the right bank is shallow and full of snags. To the left are low, steeply cut-off hills on which stone strata alternate. The river is very narrow here. Soon we strike bottom violently, just as we are opposite the Little Nemaha River, which empties to the left. The river emerges at the place to the left where the broad prairie joins woodlands. Somewhat farther ahead, shallow spots and severe jolts. A storm with heavy rain lasted about half an hour; we steamed somewhat farther and then, about noon, ran onto a sandbar. The boat was sent out to take soundings, but the wind, which was beginning to blow more and more violently off the prairie from S 2 W, drove us more and more firmly onto the sand and often turned the ship on its side. Therefore the ship was secured to a log on the sandbar to the left, and when this could no longer do any good, ropes were fastened to the snags in the river.

After eating, our hunters went ashore, but hardly had they left when such a violent storm broke that there was grave concern for the ship. Several objects—chicken cages, for example—were blown down from the deck [and] floated toward the sandbar. Some of the chickens drowned.M11One smokestack was blown down by the wind. We were afraid that the wind would tear the deck off the steamboat. Fortunately our rope held firm. The first squall abated, but very soon afterward another one arose. The captain hoped to be able to lay the ship underneath the steep bank on our windward side, about 20 feet in height, but that could not be attempted in this storm; furthermore, we were blown still more firmly into the sand.

During the windstorm it was not cold; at twelve o’ clock we had 73°F [22.8°C]. Rain intermittently accompanied this unpleasant storm. The extensive sandbars around us were covered with dust. Individual crows flew around us, [and] a Totanus with yellowish red legs (undoubtedly calidris) ran along the edge of the sandbar not far from the ship. Several of our hunters, including Bodmer and Dreidoppel, appeared on the edge of the bank along the prairie and wanted to be brought on board, but the boat had been taken in, [as] was absolutely necessary in our situation. [The two men] therefore turned around and sought shelter from the storm. Mr. Mc Kenzie and others very familiar with the Missouri unanimously declared that they had never experienced such a violent storm on these waters. [Page 2:41]The boat was sent around to fish out various lost objects that had drifted against the sandbars. The ship’s carpenter patched things up here and there. After about two to two and a half hours, the storm subsided.

Crows came flying along the sandbar. We trained our rifles on them but without hitting any. In the tall woods surrounding the prairie, in the distance, we heard several shots from our hunters. After four o’ clock the fierce wind had subsided somewhat. The hunters returned. Mr. Bodmer had killed a beautiful new to us yellow-headed troupial,M12Yellow-headed troupial (Icterus icterocephalus Bonap). which we recently came upon [for the first time] near [Fort] Leavenworth, along with the red-shouldered variety and Quiscalus versicolor. Bonaparte seems to have depicted this beautiful bird. The golden orioles were still all together in flights.

At 4:30 we were able to leave our place. We succeeded in moving through the bad area filled with many snags we sailed and along the steep bank where redbud was blooming very beautifully. After a while Messrs. Sanford and Dougherty appeared here [and] wanted to be brought aboard by boat. They had killed a raccoon and a mouse,M13Meadow mouse (Mus macrocephalus). which they brought for me; it was of the species that usually has been erroneously cited in natural historical works as Mus sylvaticus.M14See Zoological Diary, where [the mouse] is listed under the name Mus macrocephalus. They had found only very few tracks of game and had seen none at all.

Later we continued along the left bank. An island soon appeared before us, and when we arrived at the channel (slew) dividing it from the mainland, the sun was just setting. We saw [the] magnificent red sunset glow between the sparse cottonwood trunks covering the island, whereupon we were told that this very island bore the name Isle au Bon Soleil (Good Sun Island). At dusk we put in at this island, and the crew left to cut wood. The island is large, 4 to 5 miles long. Already that evening the raccoon killed by Sanford made an appearance in disrobed form on the gallery of the stern of the steamboat, where all kinds of meat were always hanging: chickens, turkeys, and rabbits appeared beside beef and pork. Marmots and raccoons were not disdained by the Negroes and Canadians if they could only get hold of them. 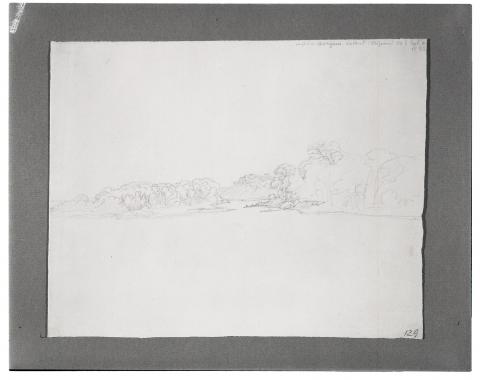