The freight wagons from here to Philadelphia and other places are very numerous, and the freight rates are not high. There are rather many Germans among the 12,000 people living in the city itself and the 24,000 living in the city and its suburbs. There are also some very well-established foreign German merchants here. It has been estimated that there are [——] churches in Pittsburgh, and there are quite a few denominations. The city is situated in the angular area between the Allegheny and the Monongahela rivers, which unite there to form the Ohio, which then continues in a [——] direction and is not yet very large. It was [at the time] so low that steamboats, sixteen of which I counted along the bank of the Monongahela, were unable to sail on it. A covered bridge that measures 500 of my paces spans the Allegheny. The bridge has two tunnels with a covered external footpath on each side and is supported on the sides with wooden pillars.[Page 1:105] From this bridge, one has an interesting view up and down the river. Wooded mountains of moderate height comprise the opposite bank, where the colors of autumn in great variety already prevail. Below this bridge there is an equally long, quite similar structure that, however, is an aqueduct by which water is conveyed straight across the river into the city. A second, very long, huge bridge spans the Monongahela.

I had stopped at the first inn, the Exchange Hotel, and the following morning visited Mr. Volz, a well-established German merchant to whom I had a letter of introduction from Mr. Krumbhaar. He was very obliging, as was Mr. von Bonnhorst, formerly in the Blücher hussar regiment, who after 1806 had gone to America, where he is now a justice of the peace. Duke Bernhard of Weimar had recommended me to him. After I had been here for several days, Mr. Bodmer and Dr. Saynisch also arrived. Mr. Bodmer’s hand had been in poor condition, but it was better now. In the local museum, I had seen several interesting animals native to this region and had ordered them from a fisherman at the fish market. Dr. Harlan of Philadelphia had also given me a letter to the owner of the museum, a portrait painter, Mr. Lambdin; and through this I had been able to familiarize myself with those interesting animals. Otherwise the museum is scarcely worth seeing and does not deserve mention. While I was waiting for the animals I had ordered, Mr. Volz suggested a journey to Economy, that remarkable separatist colony from Württemberg, which is now established 18 miles upriver from here on the left bank of the Ohio. 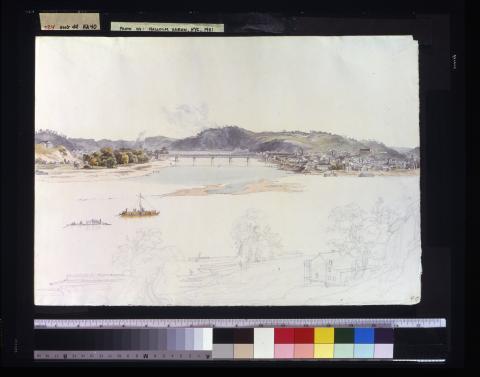