18 August: In the morning, overcast sky, pleasant, a few raindrops. At 7:30, 69 1/2°F.M23At noon, 73°F [22.8°C]. The great Bear Chief, with his brother and friends, was in the fort very early. He wants to return, with the Indians who arrived yesterday, to the camp of the Piegans beyond the river. There, where there is a small band of Blood Indians, [he wants to] shoot one of them to exact blood revenge. Once this has happened, then perhaps friendship can be restored among the Indians—or else the enmity will continue, and several more men will have to give up their lives. Indians were continually in the fort. Old Head also made his appearance. Last evening, three soft-shelled turtles M24Turtles (Trionix). had been brought in. They were of two color varieties, and they are said to be found as far away as the Rocky Mountains.M25Concerning these turtles, see Drake, Picture of Cincinnati,
p. 121. A hard-shelled turtle, too, is said to occur near Fort Mc Kenzie.

After nine o’ clock about twelve strong young Indians, including those who arrived yesterday afternoon and the man with his Corbeaux [Society] flag, mounted their horses and rode up the river to cross it farther upstream. They appeared altogether distinctive and singular in their genuine field attire and in this respect reminded one of certain Asiatic peoples. The Bear Chief still hesitated and finally decided to stay here. His brother crossed the river with the intention of shooting the sister of his brother’s murderer in the Blood Indians’ camp over there; then, the great chief said, his heart would be calmed for a while, and later his brother’ s murderer could still be killed at the right opportunity.

The chief’s old uncle was one of the principal mourners. He was seen walking about with his hair cut off and [his] face and legs smeared ash-gray, howling and sometimes weeping. Mr. Bodmer took him with this attire into our room, where he calmly sat down to be sketched. His name is NatoiePoóchsen, M26The pronunciation of this unusual name is entirely
as in German (‘ch’ velar, ‘sen’ with the ‘e’ half [=ə], the ‘n’ only
slightly articulated.) which means la parole de la vie [Word of Life].

We went out onto the prairie, where I found sage (Artemisia columbiensis) in bloom for the first time. Black troupials, the yellow goldfinch, and the finch withthe with the striped head (Fringilla grammaca Say), as well as several Muscicapa and some other small birds, were all [that] we caught sight of. Clematis, with its white blossoms, had already stopped blooming for the most part; farther upstream along the river, it was still blooming very beautifully several days ago. An Indian was with us in the bushes of Prunus padus, Acer negundo, and buffalo berry and fired his gun at birds; others, especially children, ran about on the hills, and still others were driving and guarding bunches of their horses. A strong wind had arisen, which dried out the land even more.

A Blackfoot Indian brought a horse and, in return for it, asked for a suit and a postillion’s hat, which he obtained; [it was] red and blue with silver braids. The great Bear Chief continually went about with a mustard jar and always begged for it to be filled with whiskey. He had drunk a little of it and immediately asked that it be filled up for him again. One of his friends, to whom whiskey was given, embraced him and put a gulp of it into his mouth. This is the greatest demonstration of friendship that one can show an Indian. Last year, when Mr. Mitchell had the entire band of the Piegans here, their principal chief, called Middle Bull, was about to withdraw and take all his people away. No one knew of a way to keep him, [and] all [the trader’s] gifts would have achieved nothing, until an Indian came and suggested this. Mr. Mitchell took a small bottle of whiskey, went to [Middle Bull], and spewed it into the great man’ s mouth, whereupon he became uncommonly affectionate, embraced him, and no longer thought of going away.

At 4:30 a severe thunderstorm gathered; wind whipped the dust into our room; there was thunder, lightning, and rain. Indian women brought me a model of a leather [tipi] they had made for me; they received rassade (blue glass beads) for it. I gave several bears’ feet to one old woman for tanning. The rain did not last long. After twenty minutes the weather was again calm and better. Later, however, it rained heavily once more. Since today was Sunday, the people did not work. Toward evening they gambled, and Morrin shot apart a small clay pipe, whereby he won ten dollars. The shooting occurred in the courtyard of the fort. The young bears were more entertaining today than ever; they ran about and played very comically, especially because several nice Indian boys teased them and played with them in an entertaining way. One will not be able to have fun with them much longer. I made a trade for a green stone an Indian girl was wearing around herneck her neck. It is the same stone from which they make their pipes.[Page 2:234] It is quarried above the three tributary forks of the or their sources, and the Piegan band that is now expected is said to be bringing many such stones. 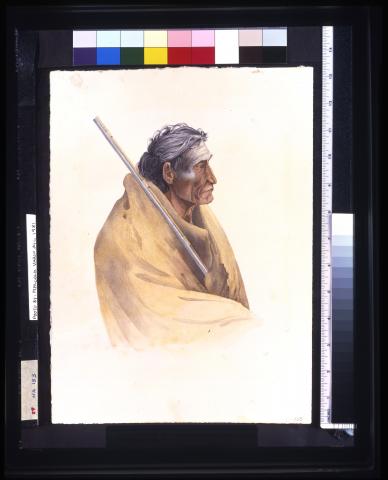