20 November: Early in the morning, bright sky, calm, nice weather, no frost. At eight o’clock, 31 1/2°F ⟨[−0.3°C]⟩. A light wind rose from west hora 7 north. The Indian at the medicine scaffolds of the Indian village moved wailed continuously. He had without doubt done the same throughout the night, and he would likely continue doing so for one to two more days. As for myself, I was still not feeling well. However, despite that, I had to start the description of the white rabbit that was shot yesterday, something I found burdensome.

I discovered that the Indian doing penance is called Ihdächä-Okíhdä (‘ch’ velar), which means, in German, “the one having a blister⟨[?]⟩ on his head.” He soon came to see us, and I realized then that I had seen him often already. He was wearing a buffalo robe ⟨[that was]⟩ white on the outside. In his ears ⟨[there]⟩ were very large brass rings. As an act of penance he had made a long row of incisions transversely across his arm. 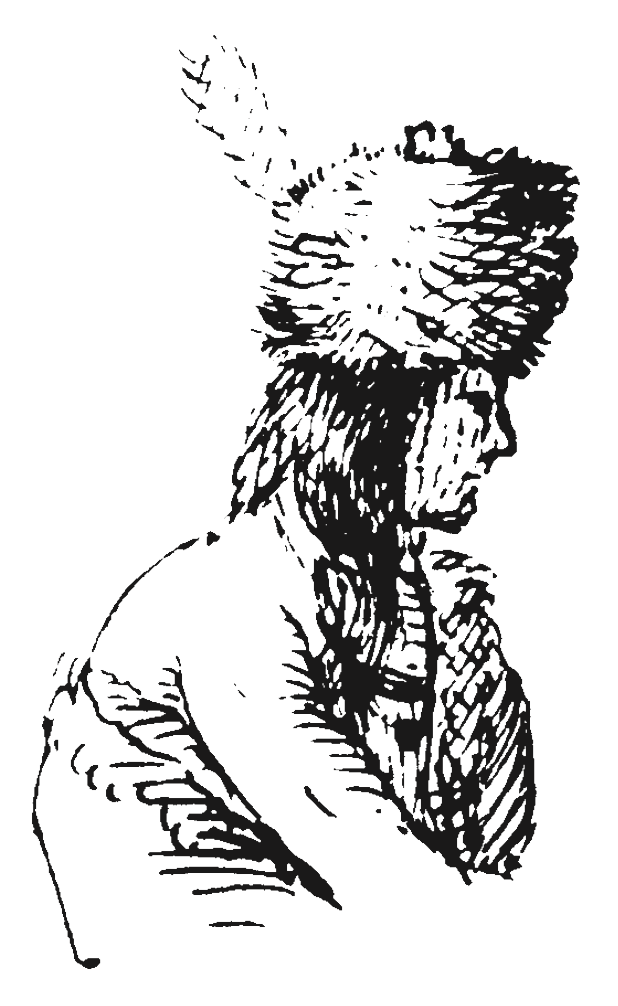 Mató-Tópe visited us and laughed when he saw that I was measuring and describing the white rabbit shot yesterday. The heavy and tall Ah-Däh-Úchä Dipäuch (‘ch’ velar) (Broken Leg) came then and told us many things. He was adorned with a cap of mink fur with bells on it; in several places on top were feathers of birds of prey. His hair hung down naturally. His face was painted downward from the top with many black stripes; on his chest he wore a silver gorget on which a deer was engraved (⟨[this is]⟩ mentioned in the second volume of the Tagebuch). As usual, his upper body was bare, even in the harshest cold, as is customary among the Mandans and Hidatsas. He coughed loudly a lot with noisy clearings of the throat, as many of these Indians were doing now. The wind had gotten stronger, and it was unpleasant on the prairie. The Missouri carried rather much ice, kept on the other bank by the wind.

Today we had no meat; the hunters had not returned yet. Therefore the rabbit that was shot yesterday was prepared. For six to eight days we had eaten beaver meat daily, which is tender and tasty when [taken] from young animals. Even the very fat tail was served. Buffalo cow ⟨[meat]⟩ was most popular; it has a pleasant taste.

Durand came from the Mandans living in the lower forest and said a striped ground squirrel had been caught there just yesterday. He would take care ⟨[to see that]⟩ we would get some. He thought one should be able to get a large male big-horn for thirty dollars from the Hidatsas, who had shot many such animals higher up on the Little Missouri, certainly 200 of them in recent years. At twelve o’clock, 42°F ⟨[5.6°C]⟩. A strong and unpleasant wind was blowing across the prairie.

Our rabbit, in the process of being stuffed, had its whole tail ripped off, and therefore the beautiful specimen became useless. The Mandan of French origin, Kipsan-NiikaM18Little Turtle. ⟨[Ed.: The modern orthography is Kípsą Řįk ‘Turtle Child’.]⟩ (la Petite Tortue) (his father was a Frenchman), came inside. He had once spoken English and French but had ⟨[since]⟩ forgotten everything.

Several Hidatsas with very big, beautiful bear ⟨[claw]⟩ necklaces visited us. Broken Leg came again, but he had taken off his fur cap and his finery. Bodmer and Dreidoppel went hunting. [They built a drag] to haul the viscera of the rabbit and other meat ⟨[as bait]⟩ for the wolves and predators, and then they took their position at the drag. They came back before dusk. Dreidoppel had seen a wolf and two red foxes. They only shot at the wolf. At six thirty the little fox ran away for the second time today and came back again for the second time. The buffalo hunters returned at this time. They had shot five bulls. Síh-Sä was with the fort’s horses in the forest and was bitten on his leg by an Indian dog ⟨[that]⟩ he immediately shot with an arrow. The evening was windy but not cold. We wrote down words of the Mandan language.

Dreidoppel found freshwater musselsM19Unio. in the creek that runs up behind the fort. The night ⟨[was]⟩ starlit and calm.