21 November: Calm, pleasant weather, ⟨[with]⟩ light frost and ⟨[a]⟩ slight overcast. At seven thirty, 26 1/2°F ⟨[−3.1°C]⟩. No wind. There were several of us who felt indisposed ⟨[in]⟩ our stomachs and intestines. Mr. Bodmer and I took medicine. This illness had affected many people the last few days. The deaf-mute Mandan came early. He communicates very fluently with Mr. Kipp, as well as with all his people, by use of sign language. He is lively and likes very much to laugh. His name is Máhnu-Ningka (‘Ningka’ without stress), ⟨[or]⟩ Turkey’s Egg. He is ⟨[five feet]⟩ nine inches (Prussian), strong, and healthy. He walks ⟨[wrapped]⟩ in a buffalo robe and carries ⟨[a]⟩bow and arrows.

Síh-Sä mixed himself white clay with water this morning and kneaded it. ⟨[He]⟩ wet his hands with the water and clay and rubbed the tanned side of his buffalo robe with it—partly to remove the fat and dirt and partly to keep it clean. Often these robes are painted completely white, ⟨[and]⟩ then they look nice and clean. The brown fur is folded over on top.

The Indians soon left again. An area on the prairie hills was pointed out to Dreidoppel today where there were supposed to be many white hares. He planned to go there later, and Síh-Sä would accompany him to show him the place. Bodmer went out to draw.

Our new room is completely finished. It was whitewashed yesterday with white clay, ⟨[and]⟩ now it has to dry out. At ten o’clock there was the brightest sunshine and very beautiful weather. Belhumeur told us in passing that he shot a large white wolf yesterday and left it. Yesterday Dreidoppel found a petrified tree trunk on the prairie. There is much of such wood here. I took many pieces. ⟨[At]⟩ twelve o’clock noon, 45°F ⟨[7.2°C]⟩. The sun had hidden behind the clouds, which now covered the whole sky. The wind was raw from west hora 9 north and strong. It ⟨[became]⟩ unpleasant on the prairie.

Dreidoppel returned after lunch. He had seen nothing but two wolves. Far up the creekshe found Unio ⟨[——]⟩; they were very small; ⟨[there was]⟩ scarcely any water. In ⟨[a]⟩ southwesterly direction he also found hills of a strange formation that consisted of red-fired clay and clinking pieces of brick lying around everywhere. Nearby also were bare clay hills without grass cover, the way I had often seen them on the Missouri. Cactus ferox grows there in large numbers but is not found in the vicinity of the fort. However, in this place I saw smaller ones, similar to mammillaris.

An old chief of no importance visited us; his name is Áhdä-Migä́ (Man Without Arms). He was dressed very simply and smoked from Mr. Kipp’s iron pipe, which was worked from a piece of gun barrel. One could not make such a pipe for less than six dollars⟨[to]⟩ sell to the Indians. The head has this shape: 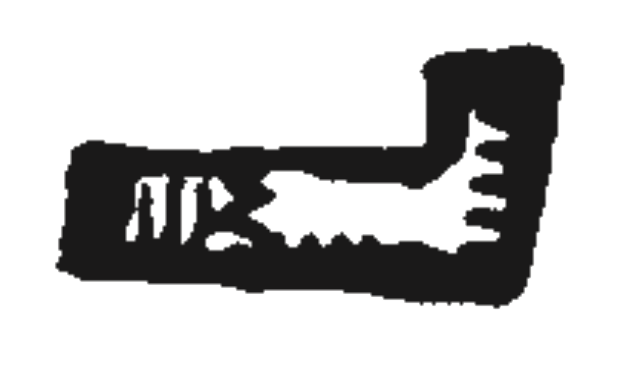 Its inner opening was too wide, so Mr. Kipp put a glass bead with a little hole drilled through it to serve as a vent for the oil ⟨[sic]⟩. For Indians such pipes would be very useful, because they do not break and their shape is altogether according to ⟨[the Indians’]⟩ taste.

The people returned from the forest. ⟨[They]⟩ had found very good wood, especially ash, ⟨[useful]⟩ for bowls and ax handles. Additionally, three cords had already been cut ⟨[that]⟩ they did not know about. ⟨[This wood supply]⟩ would come in very handy with ⟨[so]⟩ few hands now available.

Ahde-Uchä and his comrade, Beróck-Itaïnú (Bull’s Neck), came and wanted to have iron pipe heads made from a few pieces of gun barrel. Without doubt, Mr. Kipp will sell many ⟨[more]⟩ of them. Several young, handsome Indians went through the fort ⟨[and]⟩ looked in our windows, but ⟨[they]⟩ did not stay long. They seemed to like the newly completed house. The young men were bare on the whole upper part of their bodies, and their robes covered them rather carelessly. In the [Page 3:35] evening a white wolf came so close to the fort that the dogs attacked it. Mr. Bodmer shot at it. We finished ⟨[recording words of]⟩ the Mandan language. Night cloudy and windy, not very cold.