17 November: In the morning, bright, clear, moderate frost; a moderate but cold wind from west hora 7 north. At seven thirty, 21 1/2°F ⟨[−5.8°C]⟩. Magpies were flying around the fort early. Síh-Chidä had slept in the fort. He came inside early, got breakfast, and then continued with his drawing. About nine o’clock the sun was shining, friendly. A few days ago Mr. Bodmer drew some of the medicine symbols at the burial place near Mih-Tutta-Hangkusch. Síh-Sä told us today that ⟨[these]⟩ were a sacrifice, uapáhji (‘ji’ as in French), to the sun and to the moon. At twelve o’clock, 32°F ⟨[0°C]⟩. It had turned much colder and the air ⟨[was]⟩ really snowy. Several Indians came to us, ⟨[including]⟩ a tall, handsome man who spoke some Piegan.M16Ah-Dä-Pússä, Spotted Arm.

When we were sitting at lunch, Charbonneau came; ⟨[he]⟩ had walked the whole distance up from Dougherty’s place. Síh-sä came back from the prairie. ⟨[He]⟩ had painted his chest and body with white clay ⟨[and]⟩ maintained that ⟨[this made him]⟩ run better and not get out of breath. Today is Sunday, and they do not work. We hope to be able to move into our new quarters in three days. Doors, cots, and tables are lacking. Síh-Chidä had completed his drawing. It represents himself in a blue and red uniform with a crown of feathers on his head ⟨[and a]⟩ bow and arrows in his hands and is executed quite like Indian drawings on robes. Mr. Bodmer gave [Page 3:32] him the colors. All Indians are, like children, crazy about good, lively colors.

Today I described the birds shot yesterday and noticed that the Lanius was larger by far, even though younger, than the one I received earlier, and therefore a different species. Our fire burned poorly this afternoon, because it was Sunday and they could not fetch any wood. At the same time, a few Indian women came—among others, the mother of Mr. Kipp’s wife. ⟨[They]⟩ sat down in front of the fire in their heavy buffalo robes and took away from us the little heat we had.

In the evening Charbonneau had much ⟨[to say]⟩ about Prince Paul of Württemberg, with whom he had traveled. He was very lively but bragged a lot. He often ⟨[claimed to have]⟩ shot buffalo and other animals, ⟨[when]⟩ no word of it was true. He sold a horse to Mr. Kipp that he had already sold to Mr. Laidlaw. From Charbonneau ⟨[sic]⟩ he accepted sugar and coffee and did not give anything in return. Similar ⟨[stories]⟩ have given him a bad reputation here and there, but it was likely a bit too much ⟨[when]⟩ Sanford said of him that “he did not behave at all like a gentleman.” He was strong, powerful, ⟨[and]⟩ a good rider and marksman, and ⟨[he]⟩ ate extraordinarily much. Hunting was his main occupation. He could not hit buffalo from horseback; on foot, on the other hand, he was a good marksman with the rifle and shotgun. I did not feel well and went to bed early. Night cold. 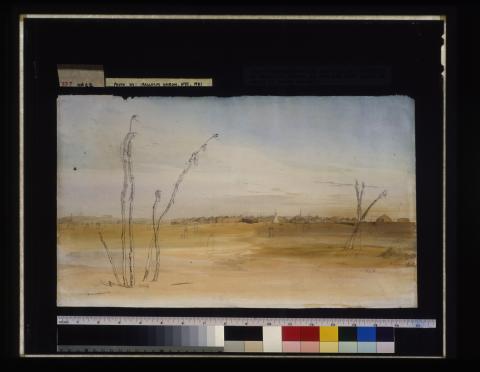 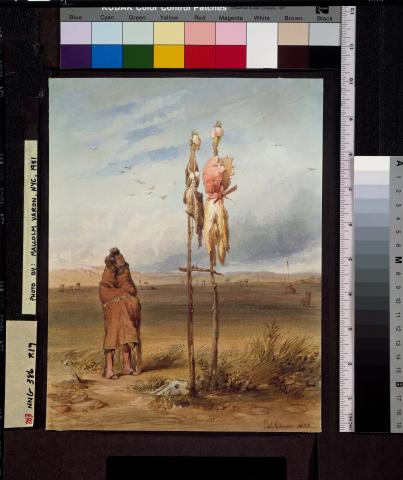