16 November: In the morning bright, calm, nice weather and sunshine. At seven thirty, 33°F [0.6°C]. Afterward the cold wind rose again, today from west hora 5 south. The river carried a hint of ice. Mild frost and the morning not cold at all before the wind rose. Morrin, Wachard, Hugron, Beauchamp, Bourgua, and Manyon went back on foot to Fort Union. They had two dogs with travois with them and intended to get there in seven days. Interpreter Ortubise’s wife, who will not stay here but with the Yanktonais during winter, received a message to join her husband. She loaded three [bullboats] with her luggage and traveled downriver. She could make this trip in two and a half days.

After breakfast Cháratä-Numakschi (Wolf Chief) visited us. He wore his usual clothes [and] on his chest the medal from President [John] Quincy Adams; [he] was carrying [a] bow and arrows. When he had left, Ah-Dä-Pússä Dipäuch (Broken Leg) and another elderly Indian came. They smoked their pipe but did not stay long.

Bodmer and Dreidoppel went hunting for a short time, and because the weather was pleasant, I accompanied them. We left Mih-Tutta-Hangkusch to the right and went down the steep slope from the high prairie on which it is located to the deep, wide, and flat ground stretching between the Missouri and the retreating hills or the edge of the high prairie. This plain, through which the trail leads to the second Mandan village, Ruhptare, and to the Hidatsa villages on the Knife River, was covered with willow thickets. The Mandans have cleared large stretches and planted corn, pumpkins, various kinds of beans, and sunflowers (Helianthus). The corn, planted sufficiently far apart in hills, gets four [to] five [or] six feet tall. Between the cornstalks, long rows of tall sunflowers are visible. [The Mandans] eat the seeds. Here and there small [shelters] of poles, twigs, grass, and cornstalks [could be] seen, from which they watch over their fields at certain times [and seasons]. Between the fields are stretches of dense brushwood and thickets of the narrow-leafed willow. We came across individual prairie hens looking for grain in the cornfields, where they like to stay. Yesterday in those willows, Dreidoppel found a white, or almost completely white, rabbit,M11Lepus variabilis. only a bit gray-spotted on its head.

We came across a few shrikes (Lanius septentrionalis), common ravens, crows, magpies, Parus atricapillus, and Fringilla linaria [in addition to] the prairie hens. In several places in the planted [fields] we found small fox traps, [each] usually with a buffalo skull on its top, [and] also a human skull. Whether [that] one lay there as medicine or had been carried there by an animal, I could not determine. In [places] between the willows, undoubtedly swampy in the spring, [there were] copses of reeds (Arundo [——]) and high Typhas still showing their spikes.

Because we could not shoot anything, only some birds, we went back about noon and walked through the village Mih-Tutta-Hangkusch. The lodges are located without any order and surrounded by a small ditch or depression. Above the smoke hole on [the roof, there] is a kind of round chimney built of twigs, over which they sometimes hang hides. When they [go], they fill this [smoke]hole and [Page 3:31] the protruding walls around the lodge entrance with thorns so that nobody can [get] inside. Frequently, on the [rounded top] of the lodge a few buffalo skulls are propped up, some striped or painted red. Everywhere, between the lodges, there are large numbers of scaffolds, [each] with two or three levels on which corn or other field crops are hung to dry.

In the middle of the village [there is] a rather large, round, and flat area. In its center is a small cylinder of vertical boards. This cylinder, which is found in both Mandan villages, is a representation of Noah’s ark; they have a similar legend of [an ark and] a great flood. They celebrate in memory of this flood with medicine festivals on this spot. The large medicine lodge is immediately above [it on] the side toward the river. Also, all other dances are performed and festivities held here. Besides the medicine devices that I mentioned yesterday when writing about the burial place, there are many similar objects to be seen in the village. They consist of poles stuck into the ground with bunches of brushwood, skins, wolf tails, and similar items attached to them.

On a pole in front of the medicine lodge [there is] a figure M12Ochkíh-Häddä (the Devil). [Ed.: This fur-and feather-wrapped effigy was depicted by Bodmer in an ink and pencil sketch of Mih-Tutta-Hangkusch with a head and a dreadful black face. On its head [is] a red-colored fur and a fan-shaped tuft of feathers. They say about this figure that a similar-looking man came to their village [and was] seen by everyone. Apparently they consider him to be the evil spirit. About this subject, the statements of the Indians should be listened to attentively.

The former fence around their village has mostly broken down, so that the four blockhouses or entrenchments are completely isolated. M13The ground between the lodges in the village is covered everywhere with empty ears of corn, or rather, cobs. [Ed.: Maximilian's small schematic drawing of the fortifications is reproduced as fig 9.29 in NAJ vol.2.]

After arriving at home, we found the blacksmith sick with vomiting and diarrhea. He was given rhubarb. Later many Indians came—Wolf Chief and five or six Hidatsas. One of them, a tall and heavy man, had tied his hair in a giant bun on the forehead in front. A piece of leather was wound around [the bun]; [it had] so many fringes and rags [attached] that he could hardly see out of his eyes.M14His name is Tichingka ('ch' velar), la Loge Peau. [Ed.: In modern orthography, Ti Hįxkote ‘Skin Lodge’. e name is given in Mandan, although the individual is said to be Hidatsa. Perhaps Maximilian got the name from a Mandan speaker.]Another one had a skin lined with red cloth wrapped around his head. Síh-Chidä came [as well] and was dressed very nicely. He wore strings of long, blue and white dentalium hanging down on each side [of his face]; below [the strings?], yellow feathers and hair. Around his neck and over his shoulders hung a broad band of otter skin, decorated [on the ends] very nicely with red and blue cloth and colored glass beads. [At] twelve o’clock noon, 53 1/2°F [11.9°C].M15The thermometer had been hanging up to now in the inner yard of the fort in the shade. In the afternoon, on the riverbank near the fort, the first snowbirds (Emberiza nivalis) were seen; two of them were shot. Later a wolf came close on the prairie behind the fort. Dreidoppel, Bodmer, and Yellow Feather ran with their rifles across [and] up the creek and hid [there]. I drove the wolf toward them; after three shots, likely [from] too far away, it escaped. In the creek we saw small birds, probably Fringilla linaria or Emberiza nivalis. They came back; Bodmer had shot at the wolf first, [after it] had just picked up a bone.

The evening was spent writing down words of the Mandan language. Síh-Sä (Red Feather) corrected Arikara words for me. This young Mandan is a good person [and is] used to whites, because he was brought up by Mr. Kipp. He still watches the horses of the fort, even though he is married. Síh-Chidä drew Indian figures, giving them to us as a present. Mr. Kipp and myself did not feel well. The former took peppermint oil. The following morning I [took] rhubarb. 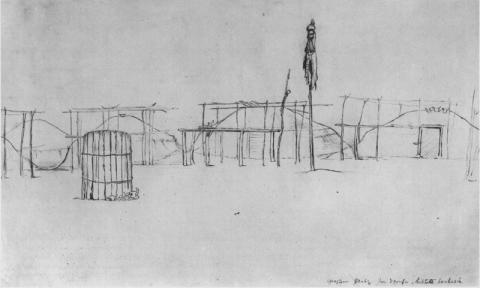 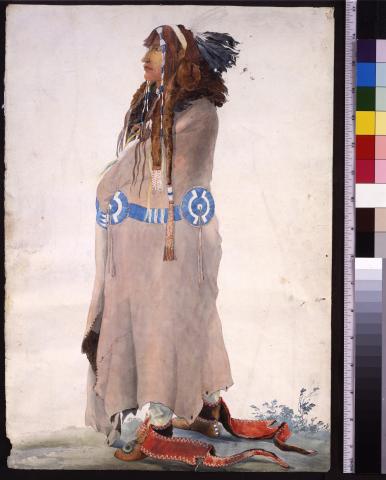 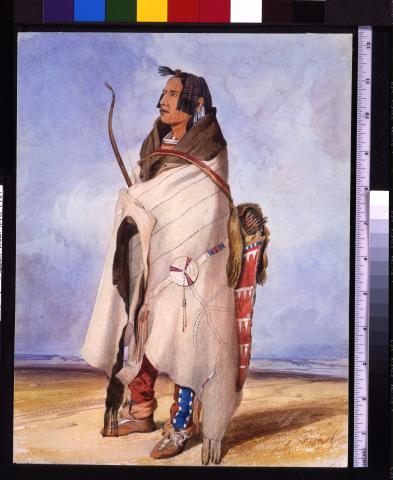