21 July: Early on the twenty-first, I confidently expected to receive letters from Mr. Bodmer in New York, but nothing arrived. Again the heat was just as great. At about ten o’clock, the Fahrenheit thermometer in the shade of the cool passageway in the inn stood at 73° ⟨[22.8°C]⟩. Today I engaged in a botanical conversation, something that is probably infrequent here: a well-informed man told me much about the plants of this region. He suggested a botanical excursion to me, but the heat was so great that I shall probably be able to undertake such an excursion only in the morning or in the evening.

If one follows the streets of Bordentown, where the houses are not connected but stand separated from each other, one walks beneath shady trees that form an avenue in front of the houses. Here there are black locusts (Robinia pseudoacacia), called locust here, which are used for ship construction underwater because the wood is said to last a very long time in water. In addition, paper mulberries, weeping willows, and broad-leaved poplars (Populus monilifera), which have an aromatic resin different from that of the balsam poplar. Tall Hibiscus syriacus, which here is called althaea and is ten to fifteen feet tall, were resplendent near the homes, with their beautiful violet flowers. In the gardens there were Monarda, Convolvulus purpureus, Hedera quinquefolia, Lycium europaeum, Tropaeolum majus, Bignonia radicans, Vitis, catalpa, and other plants.[Page 1:46]

In the afternoon I followed the railroad, which completely intersects Bordentown and, since it must always run as horizontally as possible, runs in a deep trench crosswise under the street of the town and, here, is provided with a walled arch. The street of Bordentown is seen from above. 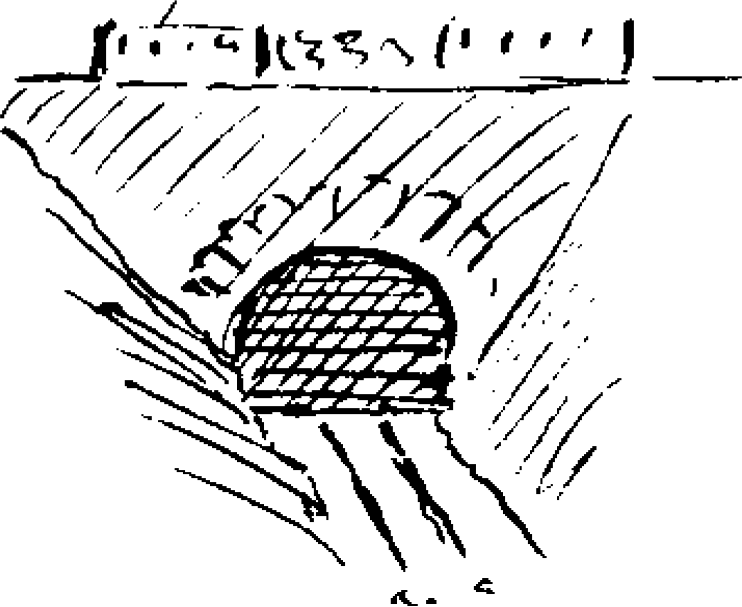 I followed this railroad almost as far as L. ⟨[sic, Joseph]⟩ Bonaparte’s country home and then plunged into the dense forest, in which there was a wild thicket made up of four to six species of oak, several varieties of Juglans, chestnuts, sumac, beech (Fagus ferruginea), long-stemmed Cornus, and other varieties of trees, with a wild understory of rhododendron, Kalmia, and Juniperus, which occasionally has very tall trunks. I had followed an old forest path, which was completely covered with yellowish quartz, to the left of which the entire forest consisted of a dense stand of pines on which Virginia creeper (Hedera quinquefolia) here and there wound its way upward. This plant often climbs the oak trunks, as do wild grapevines here and there. A species of Rhus had unfolded its reddish yellow blossom-cone and was thus a true ornamental shrub. At the edge of the forest, I saw the indigo bunting, but farther inside scarcely a bird was heard. I heard only a few monotone calls; otherwise everything was dead still. This is what people have generally told me about the forests of this region, and up until now I have found this to be true. Even with the best intentions, I could scarcely have shot at any birds here. The evening became very pleasant and cool.

The man who had talked so much today about botany, and really knew something about this field, was the governor of the province of New Jersey, whose name was M. Dickerson. His residence was in Succasunna in New Jersey, 40 miles west of New York.