2 May: Early in the morning, sunshine but still some dark clouds. At 7:30, 66°F [18.9°C].[Page 2:46] The sun is climbing higher, and the sky is becoming clearer. The river rose a little during the night. Mr. Bodmer went out with the woodcutters. I was on land for a short while. Several small birds sang their soft, meager song, but here in these forests, during the most beautiful period of spring, nothing like the invigorating singing of the birds in our German fatherland was to be heard. The local songbirds included a thrush (but I did not see it) as well as the Fringilla erythrophthalma and a lemon-yellow songbird, perhaps Sylvia aestiva. I found few plants in bloom. The grapevines had buds. I looked for snakes but did not find any. One saw traces of fire in the prairie to the right; the bushes and trees were partly black.

At five minutes before eleven o’ clock, the engine was started; steam had been building up for a long time. Again we moved, as we had been doing lately, in a diagonal direction across the river as far as the sandy islands located to the left, but the water began to diminish again and we were stranded. A very strong wind, which blew from the southwest, had risen. Mr. Bodmer returned and brought beautiful plants: the Prunus padus virginiana; red oak and another variety, short, with corklike bark; a Fraxinus; Aquilegia [— —] with lovely red flowers, yellow on the inside; a phlox with [a] whitish and light-blue flower; the orange-yellow [— —] from the prairie, etc. In addition he brought an interesting live snake, Coluber flaviventris, described by Say in Long’s Expedition under this name.

At twelve o’ clock, 71°F [21.7°C]. We could finally continue the journey but soon put in at the beautiful, freshly green tall forest of the left bank, where the woodcutters had prepared part of the necessary wood. Here Dreidoppel, who had been detained by a loudly gobbling turkey gobbler, also joined us again. He brought some more beautiful plants and had shot two specimens of Wilson's Turdus aurocapilla. They had seen two black snakes.

After lunch we reached bluffs, or precipitous hills, on the left bank, the bases of which consisted of violet clay; above [that] was a blue-gray layer; the top layer consisted of clay was reddish yellow. In several

places we saw numerous swallows’ nests on them like a colony, all attached at one spot. The river now has an island, the edge of which is sand; the surface, however, is overgrown with willows and cottonwoods. Between the island and the bluffs, Table Creek (Rivière à Table), which is still small, empties near the left bank. Often the island is also called Table Island. On the tall, steep bank to the left, the redbuds were gleaming splendidly in the light springgreen of the forest. In the bend of the river to the right near the island, we again had very little water. We pushed back, made a detour, and reached the point of land to the right, where we found some of our woodcutters, who had wood ready for us. The split logs were tossed down from the high bank and loaded. From this point on, we found more water and hence made rapid progress.

After about an hour, we had open prairie hills covered with grass to our left—that is, low green ridges, which, however, had level fertile ground (bottom) with tall forest farther ahead near the water. Here, on a broad stretch, the river was shallow. We ran onto a sandbar, were jolted, turned around, let the ship drift back, [and] then followed the left bank more closely. To the left, farther ahead, [we saw] low, fresh green hills, low limestone bluffs; along the edge, moderately tall oaks, elms, cottonwoods, and other trees.

Weeping Water Creek now empties to the left from beautiful thickets before the hills. Between it and the Missouri, fertile alluvial soil spreads out, overgrown with very tall, luxurious forest and dense understory.[Page 2:47] The bank here was steep and 10 feet high; before it in the river, many snags. On shore, a species of Tringa [is] rather numerous. The growth of the forest here is again very vigorous. Soon an island follows to the right; a great many snags near this bank; ducks were sitting on them. Sandbars along the bank to the left. On a broad stretch of the river, we saw before us the first of the four or five Five Barrel Islands (isles aux cinq barrils). The view of them was beautiful, illuminated by an extremely bright evening sun, which gave the spring foliage an incomparable splendor. Large numbers of wood ducks, all of the species Anas sponsa, flew up before us.

We continued along the left bank, which here was rather destroyed, with dry and broken trunks; behind it, dark, new green thickets and steep hills. The forest was scenic but not tall. Prunus padus virginiana bloomed here in large numbers; Cercis canadensis was nearly finished blooming and already dull red; the red oaks had dried-out blossoms; grapevines entwined these trunks. In the rocks of the hills, blue phlox formed blue patches. Farther on, a steep rocky hill [was] completely overgrown with blooming Prunus padus and another shrub, which seemed to me to be Staphylea trifolia.

After supper we saw a canoe on the river. It came paddling toward us, and in it was a certain Fontenelle in the Fur Company’s service; [he] had another man with him. [Fontenelle] lives at the post where Major Dougherty owns a house, which he uses when he travels as the Indian agent for the Otoe, Omaha, and Pawnee nations. Mr. Fontenelle is now supposed to undertake a journey from the Teton River to the Rocky Mountains with a party of engagés . He stayed with us today. We soon put in on the left bank. 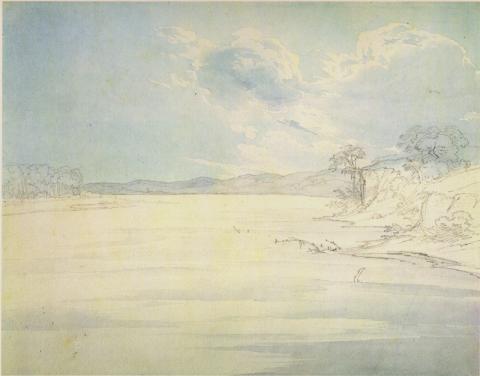