3 May: In the morning, beautifully bright sunshine. We pass one of the hills to the left, which is higher and more isolated than the others; it bears the name Iron Eye (Ischtá-Masö́ or Mansö́ in the Otoe and Omaha language). Here a small creek with the same name flows into the Missouri. Somewhat farther on, we did not have enough water; we fastened the ship to several trees and let it swing around, whereupon the rope was taken in and the ship moved back, made a turn, and then steamed up along the right bank.

At 7:30, 67°F [19.4°C]. In the forest individual redbuds are blooming, but sparsely. We are now rapidly approaching the big Platte River. Four to 5 miles from the mouth, one can already distinguish its water from that of the Missouri, since it is clear and blue; it flowed separately along the bank located to our left (or, actually, the right bank) of the river. A mile farther, the Platte water is covered everywhere with white foam bubbles, because this river has risen, and thereby we have gotten more water. Beyond the mouth of the Platte, according to Mr. Fontenelle, the Missouri is said to be very low. To the left along the bank, one now observes pretty wooded hills; to the right, many snags along the steep bank. Here we soon halted to cut wood. We entered its shade. A level, fertile tract was protected by tall, shady trees and overgrown with beautiful fresh grass and various kinds of plants. The blossoms of the Gleditsia, as well as those of an Oxalis and other plants, were nearly open. Deer tracks and droppings were very numerous, as was dung from the Indians’ horses. The common raven and the golden oriole with the red shoulder and many small birds were to be seen.

We soon sailed on; on the other side of the river, there was a broad, white band of foam and small bits of driftwood, which the Platte River now thrust forth moreand more and more strongly. Before the hills on the left bank lay woodland, then green prairie hills before which we saw several tall, dry trees that seemed to be completely covered with caterpillar nests. [We passed] several small, empty runs here; swallows in the air.[Page 2:48]

A half hour later, we reached the first mouth of the Platte River on the left bank; it is separated from the second one by a flat island, behind which lie pretty green, gently leveled-off hills. The second outlet is the larger one. On the sandbar near the island, large deposits of driftwood. The Platte was very high; it carried wood and foam downstream. Its bluish water, although not clear, was nevertheless much clearer [than that of the Missouri], from which it remained very distinct in a semicircle. The view to the rear, facing both river outlets, is very beautiful: the blue circle of water in the foreground, the green hills on the right Platte bank in the background. To the right, opposite the outlets, is a woodland, the floor of which is partly overgrown with willow and cottonwood; where there are no willows, one sees into the forest between the tall, shade-bearing trees. On the sandy point on the Platte, wild geese were walking about. Twenty minutes farther [on,] Papillion Creek emerges from willow thickets; at this place the Missouri bank has single tall trees, almost in a row along the edge of the prairie. At twelve o’ clock, 75°F [23.9°C]. To the right, sandbars with short willows.

Before us we saw the green prairie hills, especially [the] three or four on which Bellevue, Dougherty’s agency, is located. This place was formerly a trading post of the Missouri Fur Company. This failed and was sold. Mr. Fontenelle acquired it and sold it to the government, which transformed it into the agency for the Otoes, Omahas, and Pawnees, of which Dougherty is now in charge. A subagent, Major Beauchamp, and several blacksmiths live here. Mr. Fontenelle settled about 400 to 500 paces farther down. From the Indians the government bought the entire right Missouri side as far as the Big Sioux River but, until now, has left them in possession of it.M18Regarding this purchase, see appendix page 319 of this diary.

Here the river had a large number of sandbars on which we saw many wild geese, including a pair of completely white ones with black pinions (Anser hyperboreus), here called brant, which nest here.

About two o’ clock, we reached Mr. Fontenelle’s residence, consisting of several buildings with fine cornfields situated before pleasantly green, sparsely wooded hills. Some of these cultivated fields belong to the government. Behind the hills the vast prairie extends.

The land here is extraordinarily fertile: a poorly cultivated acre produces one hundred bushels of Indian corn, far more when it is carefully cultivated. From there we reached the Bellevue Agency, very nicely located on an elevation, the cemetery completely on top. Here the direction of the river is N 10 W. Several huts are located down below by the water; the agency building, the dwelling of a smith and his family, and several other buildings are on the elevation.

Several men also live here who have Indian wives of the Otoe and Omaha tribes. They came on board, dressed in red and blue, with characteristic broad faces and large features; round, broad heads; pendent breasts; small hands and feet. Their children had only dark-brown hair but nice faces and snow-white teeth. The womenwore women wore dresses trimmed with white braiding. It was here that twelve Iowas recently crossed the river and pursued a group of unarmed Omahas who had just left here, caught up with them on the prairie 3 miles from here, and killed and plundered all but a few, whom they left for dead, since they were severely wounded. The victors returned by another route. A woman and child were restored to health. Dougherty left [us] now with the intention of clearing up this matter with the Omahas.[Page 2:49]

We halted here [and] viewed the site and its beautiful view of the river. On the hill, huge quantities of blue phlox and Staphylea trifolia as well as red Aquilegia were blooming. Indian corn, which had especially beautiful, varied colors—a mixture of black and red and the like—was taken on board. I received a nice snake (Coluber eximus H. ?),M19Coluber eximus Harl.? which was regarded as poisonous.M20Here the variety of rock is limestone with very many shells. I noticed only the bivalved but did not have the time to make the appropriate investigations, which certainly can be better done on our hoped-for return this fall.

About four o’ clock or 4:30, we left this place and steered along the wooded left bank. Here we reached two mackinaw boats, which our crew had fetched. We suddenly caught sight of the first Omaha Indians, three in number, who were sneaking along the shore: an old man, a younger one, and a woman. They were wrapped in buffalo hides; the young man had a bow in his hand and on his back a quiver made of hide with arrows. He was painted white around his eyes and nose. The woman is the well-known Mitain (‘n’ as in French), of whom Say relates in [Edwin James Edwin’s account of] Long’s journey that her white husband left her and took their child with him, whereafter she followed him with much loyalty for a great distance.M21For the story of this woman, see Major Long’s Expedition
to the Rocky Mountains (vol. 1, p. 223), where Say tells it
in detail. Recently she was stabbed in the chest by the Iowas and only by chance avoided being scalped; her son, likewise wounded, is also on the path to recovery. The mackinaw boats were attached to our ship. After we had turned right from the wooded hills on which Bellevue is situated, we had sandbars and alluvial soil on both sides. The river turns right and then left again [and] makes several significant bends where, on the whole, it is (overland) only a short distance to Bellevue.

This region is the true territory of the Omaha Indians, who roam on both sides of the Missouri, from Boyer River up to the Big Sioux River and even higher to the Jacques River. Moreover, they hunt between the Running Water (de l’ Eau qui Court) [Niobrara] River and the Platte River. Their nearest village is about 25 miles away from Bellevue. That they plant Indian corn has already been mentioned, and when not occupied with its cultivation, in the intervening time, they devote themselves to hunting buffalo. The nation is not numerous now, about [— —] warriors; smallpox and other diseases have greatly reduced them. They have few young, vigorous people; on the contrary, they have many old people. Earlier we had come through the territory of the Otoes, who hunt the same area with the Iowas; their language is that of the Iowas. The Omahas have a special language, which differs from that of the remaining tribes except for individual words. See the top of the following page, where about twenty sample words are listed. Their pronunciation is not very difficult. The ‘a,’ which is fully pronounced between ‘a’ and ‘o,’ occurs very frequently. The English language renders this sound, for instance, in the syllable haw; I prefer to write it as ‘å’. The figure shows two of the Omahas we saw today: [drawing missing]M22Two Omaha Indians.[Page 2:50]

Toward evening we put Messrs. Dougherty and Fontenelle ashore at the left bank, [which was] covered with dense cottonwood forests. [The men] returned from here to Bellevue, to which they had only a few miles [to go] on foot. This bank was very rugged [and] full of timber; on it [was] a picturesque wild forest. Wood ducks and sandpipers live along these banks. These regions, particularly the prairies, are very favorable for raising livestock. Cattle thrive very well here; [they] provide much milk but occasionally must receive salt. Mr. Fontenelle said he would have five thousand swine in a few years if the Indians did not shoot too many of them. Our group has already decreased today. Tomorrow Mr. Pilcher will also leave us. Toward dusk we lay to on the left bank. The evening was very warm and pleasant. 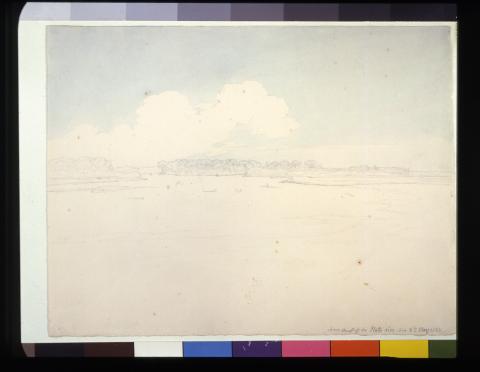 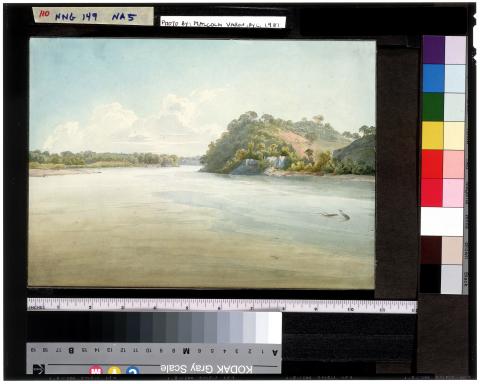 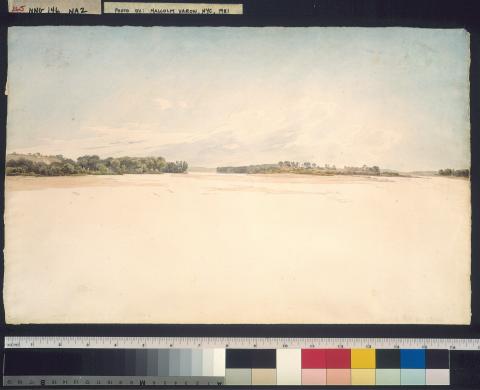 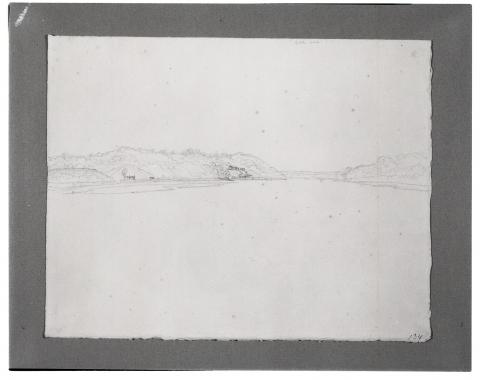 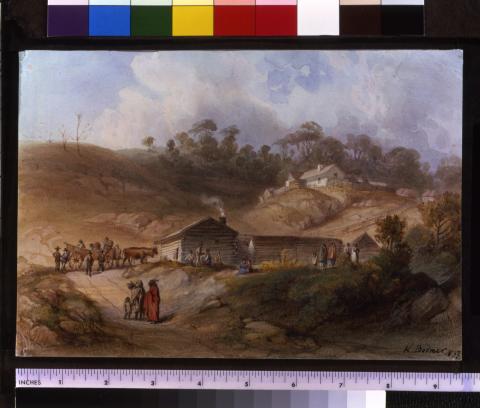 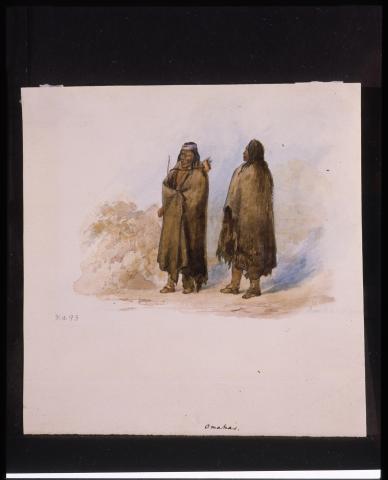