11 October: In the morning the weather [was] better but very cool. The appearance of the banks was the same as yesterday: constantly dense forest, settlements here and there. We soon reached the Little Hocking River,M23Little Hocking River or Hock-Hocking R. which comes from the Ohio side. Ducks, particularly teal, fly past. Flights of birds are moving south.[Page 1:114] At eight thirty the thermometer reads 13°R [61.3°F, 16.3°C]. On the right bank, rocks, all of them stratified; they appear to be graywacke slate. In several places, large blocks on the bank. A wild, rocky hill, red and multicolored forest. In the rocks, a cave, which, however, is formed merely by an overhang. Shade Creek issues from the right. Numerous trunks in the forest are entwined by scarlet red vines like red columns. Single rock turrets in the primeval forest, often with interesting shapes. We met several flatboats, rectangular boxes made of planks. They go from Pittsburgh to New Orleans, where they are sold intact. They are loaded with all kinds of goods, are often wrecked, are insured.

The river channel [at this point] was no wider than 40 paces. To the left there was a sandbar. Here on the bank, one saw the devastations wrought by the river. To the right there was beautiful wild forest with an understory of pawpaw trees (Annona). Wild view of the channel behind us, with large deposits of driftwood. Dreidoppel shot at a kingfisher and a grebe. A sandpiper near a wild ravine to the right. Grapevines in the primeval forest to the right cover all the trees with their tendrils; with their hanging vines, they provide a faint idea of the forests of Brazil. The river had exposed the smooth stone ridges or stone layers in its bed along the bank. Large sheep moved about on them. A small creek to the left. Swallows fly above the river; they seem not to have migrated yet. Annonas everywhere on the bank, roundish, pyramidal little trees with yellow leaves. A white-and-black gull. Stone ridges on the left bank, willow thickets behind it. On the bank near all the settlements, cattle, geese, and pigs graze; the pigs [are] often very multicolored with black spots. Along the bank, piles of wood for the steamboats. Tall forest splendidly overgrown with grapevines. Near the dwellings there were pawpaw trees, some planted regularly in rows. Especially interesting are the wild scenes of the primeval forest: trees overgrown with picturesque vines; dark ravines with small runs in them; a picturesque rural bridge of logs over them. On the bank, trees fallen on top of each other; on the forest trees, scarlet red garlands of Hedera hanging far down. Suddenly a Papilio plexippus flew over the ship. To the left, an entire forest of pawpaw trees, which had lost most of their foliage, appeared behind a sandbar. The understory in the Ohio forests consists mostly of pawpaw.

A flatboat was stranded on a shoal. The people stood in the water and tried to get it afloat with poles. The river is now wider. The bank consists of forest with individual farms; the little houses are small, miserable log huts. Varying views, sometimes wild, sometimes more pleasant, on the river. The weather is agreeable: sunshine, not too warm. At twelve o’clock, 16°R [68°F, 20°C] on the afterdeck of the steamship. Magnificently sublime primeval forest scenes to the left; splendidly colored forest with a log house in it. On the opposite side, bare, reddish clay bank; near the bank, rectangular little boats like boxes. Here the bank was deeply eroded. Two beautiful islands with tall forests.

The houses in this region are built in the manner of Swiss huts, somewhat like alpine dairy huts. The state of Ohio, to our right, is said to be so fertile that there is no need to fertilize the fields. Here the Swiss colonists are praised very highly; they are said to be very industrious. A kingfisher on the bank. Platanus thicket among the rocks on the bank. The foot of the mountains often completely overgrown with Annona glabra, also the ravines. A turtle swims past. Dreidoppel saw several of them sitting on driftwood. Splendidly dark creek, which one can see into; tall timber shades it in a most picturesque manner. A boat, Don Pedro, rowed by immigrants, sailed past.

On the right bank, much coal piled up; one sees the coal pits along the mountain. From the top of the bank, chutes have been constructed on which [the coal] is conveyed down to the ships. 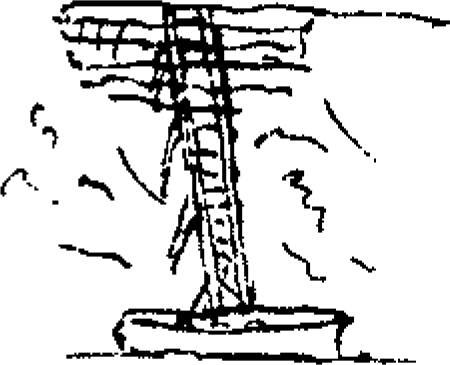 Here there were five or six houses, a hamlet with large piles of coal and pits nearby. A strong odor of sulfur penetrated as far as the steamship. Boats lay below at the bank in order to load coal. Near the town there was a sawmill. Then came enormously tall timber on the right bank.[Page 2:48] On the bank, entire tracts of pawpaw trees. Coal pits on the mountain again. The Ohio Valley is very wide here. Large cornfields. Negro children, perhaps slaves, are sitting on the bank.

Off the right bank, the ship lies to; we go ashore for a short while. A house was located above, in the vicinity of which stood an enormous Platanus, which divided into several thick branches. We brought back pawpaw branches, a pretty Aster, and Asclepias pods. Mr. Bodmer, whose hand had scarcely healed, went out with the shotgun and found a splendid bird of prey, which he did not get. Left bank now partly bare; scattered trees and pawpaw thickets. The river becomes rather narrow. To the left appears Point Pleasant, a small town, or hamlet, or village, of about thirty houses. It consists of a single row of houses on an elevated, bare, clay bank along the stream. This town is immediately followed again by wooded banks. Near the town flows a nice river, the Big Kanawha River. Magnificently tall forest on the low-lying bank.

About twenty minutes later, we reach on the right bank the market town, or little city, Gallipolis, an old French colony where French is still spoken. Here the steamship Gallipolis lies at anchor. Another one is being built. Our two Frenchmen went ashore here. An attractive little place, which, however, can only be called a village. Right behind the place, magnificent tall beech forest; along the water, more Platanus. Pawpaw trees form a brushy thicket 20 to 30 feet high under the Platanus as the rhododendrons do beyond the Alleghenies in Pennsylvania. Willows (Salix), too, grow in some places in front of and among the Platanus. Boulders frequent along the bank. The sun is setting behind the mountains; beautiful, magnificently clear evening sky! Gleaming surface of the Ohio! To the left again, steep bare bank, 40 to 50 feet high; only a little timber on it. Cornfields and pawpaw trees. Wood submerged in the water. After sunset, immediately cool. A swarm of ducks on the water. Shore mostly covered with cultivated fields; forest less dense. Then lofty, splendid forest to the left; not so dense on the right. We traveled all night long. At nine o’clock the ship several times violently struck the bottom. To the left we had passed Raccoon Creek and by this time were at the Indian Guyandot Creek, where there is a small village of the same name. The fog that now descended was so dense that we had to lie to 6 miles below Guyandot. The night was very foggy and cool.