12 October: In the morning, dense fog. At six thirty, temperature of 10°R [54.5°F, 12.5°C]. Since we lay to until eight thirty, Mr. Bodmer went ashore on the Ohio side and shot a Picus carolinensis. At eight thirty, sunshine; we weighed anchor. Our poor old ship was scrubbed. It is only four or five years old but already condemned; the engine [valves] no longer close. The lower deck measures about 50 to 51 of my paces. It has no room at all for walking; it is dirty.

On the bank, tall trees, including sugar maples (Acer saccharinum). No sugar is made here, although it is made in the more northerly and easterly regions. Two holes are bored into the tree, a tube is inserted, and when enough sap has flowed, a peg of green wood covered with pitch is driven in and the wound heals over. Some of the Platanus on the bank have been sawed off so that they cannot fall into the river and become snags. The river is still giving off dense mist. Willow thickets in several spots along the bank. To the right, Symmes Creek. Then Burlington (town), a small, scattered village with a sawmill on the bank, in Lawrence County. Two beautiful kingfishers are chasing each other on the bank. The ship strikes large rocks along the shore and lists somewhat. Now beautiful tall forest follows. The Platanus still have beautiful reddish brown leaves in their upper crowns and toward the ends of their branches. The shuddering of the ship caused by the engine is so strong that it is almost impossible to write.

To the left, Catlettsburg with Big Sandy Creek.M24Border of Virginia and Kentucky. Banks on both sides, forest with individual settlements. The steamship Juniata navigates past us upstream. To the left we reached Hanging Rock, a small village with few houses [from] where most of the iron implements for the entire river are shipped. Pretty location, wild, with rocks and forest. Wagons drawn by eight oxen pull the iron implements up and down along the high bank. Beautiful, picturesque rocks to the right in the mountain and the forest. They form a bare wall. Soon rather bare banks, steeply inclined, on both sides.[Page 1:116] Beneath them, one occasionally sees thickets of young willows close to the water, where they were spared when the stream was at flood stage. 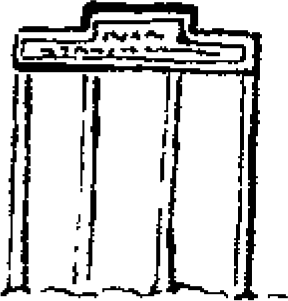 Near several habitations we see tall weeping willows. On the left (Kentucky) bank we reach the village Greenupsburg (town), with a row of seventeen or eighteen mostly small houses along the high riverbank. Only a few houses are of brick. On the bank, people have erected signs that advertise their merchandise or occupations. The labels are written with large letters on a white background.

From here the bank in part is badly eroded. Many small habitations similar to shepherds’ huts. Fields of corn alternating with beech forest colored yellow and red. Gaggles of geese; flights of small ducks. Farther along on the bank, a mountain with lofty, beautiful forest, which all the mountains have but which is remarkably beautiful here, with very vivid colors. Grapevines cover the tall crowns. On the opposite side, thickets of short pawpaw trees among the taller trees. Three flatboats attached to one another, each with a long rudder. Just above the water level, there were small openings from which a large number of immigrants peered. To the right, the Little Scioto Creek [River]. In it, a furnace (chimney). The river has exposed a large sandbar almost to midstream with mussels (Unio) on it. On the eroded bank behind it, Platanus shrubs. On the mountain to the right, high, picturesque cliffs. A boat with immigrants. Creek to the left; poplars on the bank. Then extraordinarily lofty, splendid beech forest. The shape of the beeches [is] as in our own tall forests. In certain respects, nature remains alike in the same climates or latitudes.

In the evening we cast anchor. We learned that our ship had caught fire and burned near the steam engine; the fire had been quickly extinguished. In the dark several steamships, including the ship Erie, moved past us. They looked magnificent: lights everywhere, and sparks flew about as though from a tall furnace. On the bank a fire burned in the tall forest and provided a magnificent sight. Mr. Bodmer hastily sketched it. Toward morning our ship ran aground and remained motionless for a long time. At daybreak, rain.

From here on, farms increase.

The forest is tall but less dense underneath. A small stream (run) with a most picturesque plank bridge and tall dark, shady trees.

We soon reached Portsmouth (town), an attractive market town with a large warehouse for merchants’ supplies; many nice brick houses. The Big Scioto River issues below the town, [also] the Erie Canal, on which boats travel daily and with which one can travel very inexpensively. We had an interesting landing at Portsmouth. A crowd of people stood ready with their baggage to join us immediately. On the other hand, many persons went ashore, as we, too, did for a short while. Many immigrants arrived with all their possessions. Peasants carted their beds and sacks, but their greatest wealth consisted solely of small children. One saw very comical scenes: Negroes in ridiculous costumes, our own Mr. Stewart in the lead with his huge earrings, a colorful cloth wrapped around his head, and his shirt collar (in place of the stand-up collar) drawn up over his ears. Another Negro brought a large number of chickens, which suddenly got away from him. One of them was chased into the water and leaped onto the ship. Two steamships were being built here.

Now comes forest, but scarcely a quarter of an hour later a creek appears. Then to the right, a broadening of the valley, with fertile soil and tilled fields, but soon again forest along the bank. To the left, sandbars where cattle are frolicking and fighting. Undergrowth of pawpaw thickets on the right bank. They have yellow leaves at the tip of their top branches like young German birch thickets. Cabbage patches very extensive along the river; just a narrow border of trees before some of them. Likewise to the left, but here more forest, particularly tall stately beeches. To the right a fringe of poplars, several Populus canadensis or angulata; they made their first appearance only late this afternoon. To the left, lofty, tall forest: slender, stately trunks in all different colors crowded closely together, apparently rather clear underneath. To the right, the river has severely battered the bank; it is steep, eroded, and without many trees but full of heaped-up driftwood and uprooted trunks. To the left, tall beeches, oaks, maples, elms, Platanus. The branches of the latter, densely entwined with Hedera quinquefolia, [were] like scarlet red columns. Along the bank one sees gaggles of mostly white European geese.

Several interesting mountain formations rise in this region. Most of the peaks are round, some broad, some (though very few) pointed. Somewhat farther on, a beautiful view back toward the chain of mountains opposite Portsmouth. It forms a basin-shaped valley to the right and left on both sides of the river, then approaches the river again and continues down along the bank.

Where the mountain chain again comes closer to the river, the right bank is bare and steep, about 50 feet high. Here a farmer who lived above it had fastened a ladder on which one climbs down to the shore. To the right, splendid tall beech forest. The mountain chain extends down along the river. The river makes numerous bends and affords scenic views. Woodlands everywhere; behind them picturesquely formed mountains. Extensive farmlands appear everywhere here in the forest; some have attractive brick huts. Between them are small shepherds’ huts, again as in Switzerland. To the right the hills remain distant; on the left they form the bank and provide picturesque forest scenes.[Page 1:117] Toward evening we reach the village (town) of Rockville on the right bank, where numerous small fires are burning, the cause of which is unknown to me. This place is not indicated on the map.