25 November: In the morning, bright, clear sky, light frost. Early, our fire did not burn, ⟨[because]⟩ the wood was not dry; it was therefore uncomfortable in the room. At seven thirty, 16°F ⟨[−8.9°C]⟩, wind calm. Weather very pleasant. The sun shone brightly. I saw many snow buntings (Emberiza nivalis), most likely several hundred in one flock, below the river and across the mouth of the creek in the dry Solidago plants, picking the seeds.

Small Indian boys had set up snares on the corners of a large square in the following manner: many snares of horsehair were attached to a long stick; the stick was held down at each end by a rock. They sprinkled the seeds of the Solidago around it and waited for success. Without knowing about the snares, I chased away the birds, whose white plumage flashed in the sun. 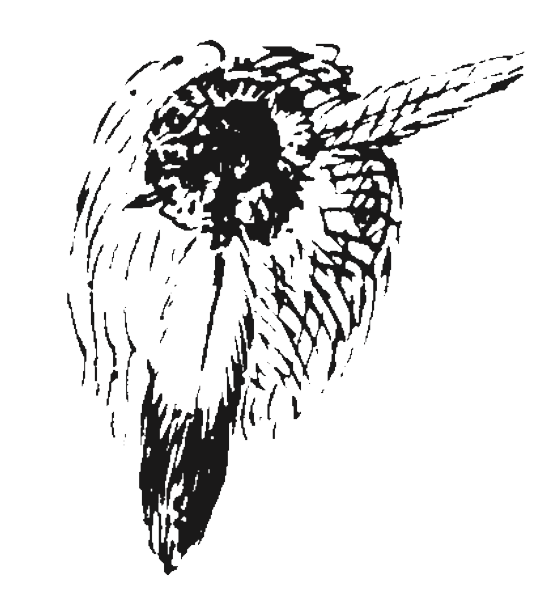 Several Hidatsas came into the fort, among them a handsome young man with his face painted red. On the back of his head ⟨[he]⟩ wore a tassel of black feathers trimmed short. ⟨[At]⟩ the center ⟨[of these]⟩ hung a white and black war-eagle feather, ⟨[and]⟩ another smaller, black feather was stuck through his hair as shown here.

About noon several Hidatsas came with beaver pelts. Road Maker and Péhriska-Rúhpa were the most outstanding men. A young Indian rode a colorful horse; the bridle was decorated with red and blue cloth. The company has those made for ⟨[the Indians, who]⟩ have to give five to six buffalo robes in trade. The Indian indicated to us that ⟨[this man]⟩ had stolen the horse from the Dacotas. The ⟨[forelock]⟩, part of the mane and tail, and the area around an eye were painted reddish brown. At twelve o’clock, 50°F ⟨[10°C]⟩. Péhriska-Rúhpa visited us. A light wind rose, blowing out of west hora 8 north. There were many Indians present for lunch, ⟨[including]⟩ the man with the colorfully decorated bridle. His name is Old Bear, Mató-Chihä́ (‘ch’ velar), and he is physically unusual. He comes from a family whose members all have long whitish hair. He is a powerfully and well-built young man. ⟨[His]⟩ eyelashes are all white. His hair in front and on the sides ⟨[is]⟩ blackish brown, but behind his ears, long, almost white braids hang down over his shoulders. Spotted Arm was also in the dining room. Before lunch they brought only twenty-six beavers. But Mr. Kipp believes he will get more than a hundred today. Spotted Beaver came, too. He was marked on his back with large, snow-white spots ⟨[that were]⟩ [Page 3:37] very interesting—an unfortunate, altogether patchy-looking skin.

A young Indian brought a well-preserved skin of an urophasianus, which I bought for a mirror (worth seventy-five cents). In the skin of a prairie dog, he had large pieces of mica, which he took out with an effort, and ⟨[then traded]⟩ me the skin for red ⟨[paint]⟩ at a reduced price.M21These pieces of mica they use as white paint. They burn them in fire ⟨[and]⟩ mix them with water, and that yields ⟨[a]⟩ very white paint. In the afternoon, no wind, weather pleasant.

An Indian, chief Kähka-Chamahän (le Petit Corbeau) from Ruhptare, stayed with us a long time. He wanted to trade four beavers for a music box. This man ⟨[has]⟩ a lame foot. The sky had clouded over; we would likely get a change in weather. In the evening, as it became dark, we ⟨[had an]⟩ alarm. It was said there were enemies in front of the fort, and the Indians ran away. Dipäuch and Bull’s Neck saw an Indian hiding behind ⟨[a]⟩ blockhouse; they caught ⟨[and]⟩ beat him, and it turned out that he was a Hidatsa. Later it was rumored that there were whites in front of the fort. They opened the gate and Charbonneau stepped inside. He wanted to ⟨[invite]⟩ us ⟨[to]⟩ the great buffalo medicine festival. This festival is held to attract buffalo and lasts four nights. The Mandans had already celebrated the same a few days ago in their forest ⟨[winter village]⟩, where they live in sixty lodges. Mr. Bodmer saw a white wolf near the fort at eight o’clock. It stopped, however, at 60 paces ⟨[away]⟩ and noticed him too early. The night was as clear as day ⟨[with]⟩ the most beautiful light of a full moon, not a breeze stirring.