5 May: We were called late last evening to Mr. Cabanné’s to see a dance of the Omahas. About twenty of these Indians had gathered under bright moonlight in front of the house. The main dancer, a large man over [5 feet] 10 inches (Prussian measure) tall, wore on his head a huge feather crown, like those of the Camacans in Brazil, made from very long tail feathers and pinions of owls and birds of prey; in his hand he carried a bow and arrows. His trunk was bare except for a whitish hide that covered his right shoulder and chest and was decorated with bundles of white and black feathers. His arms and naked parts were painted with white stripes. He had his breechcloth around his hips, and his leggins were of leather and painted with dark transverse stripes covered below with a large number of fringes. He looked savage and warlike, an image to which his athletic figure contributed. A second dancer with a muscular body was completely bare on the upper part of his body, painted white, the war club with skunk hide (see page 52) in his hand and a similar feather crown on his head.

These two men, as well as several younger men and boys, formed a line, opposite which other Indians had sat down in a row. In the middle of them there was one who beat a kind of drum in rather rapid time; others had decorated their war clubs with little bells, which they shook and moved in time with the drum. They were all painted the same way, mostly white, and all of them were making music and singing “he-he-he” and so forth, at times loudly shouting for joy. The dance consisted of jumping with both feet simultaneously, firmly stepping forward without lifting oneself high, the trunk poised somewhat forward, weapons frequently held up high. Thus they often sprang toward each other for about an hour until water [sweat] was pouring from their heads, whereupon a pile of tobacco was tossed to them, a present usually given them on such occasions. 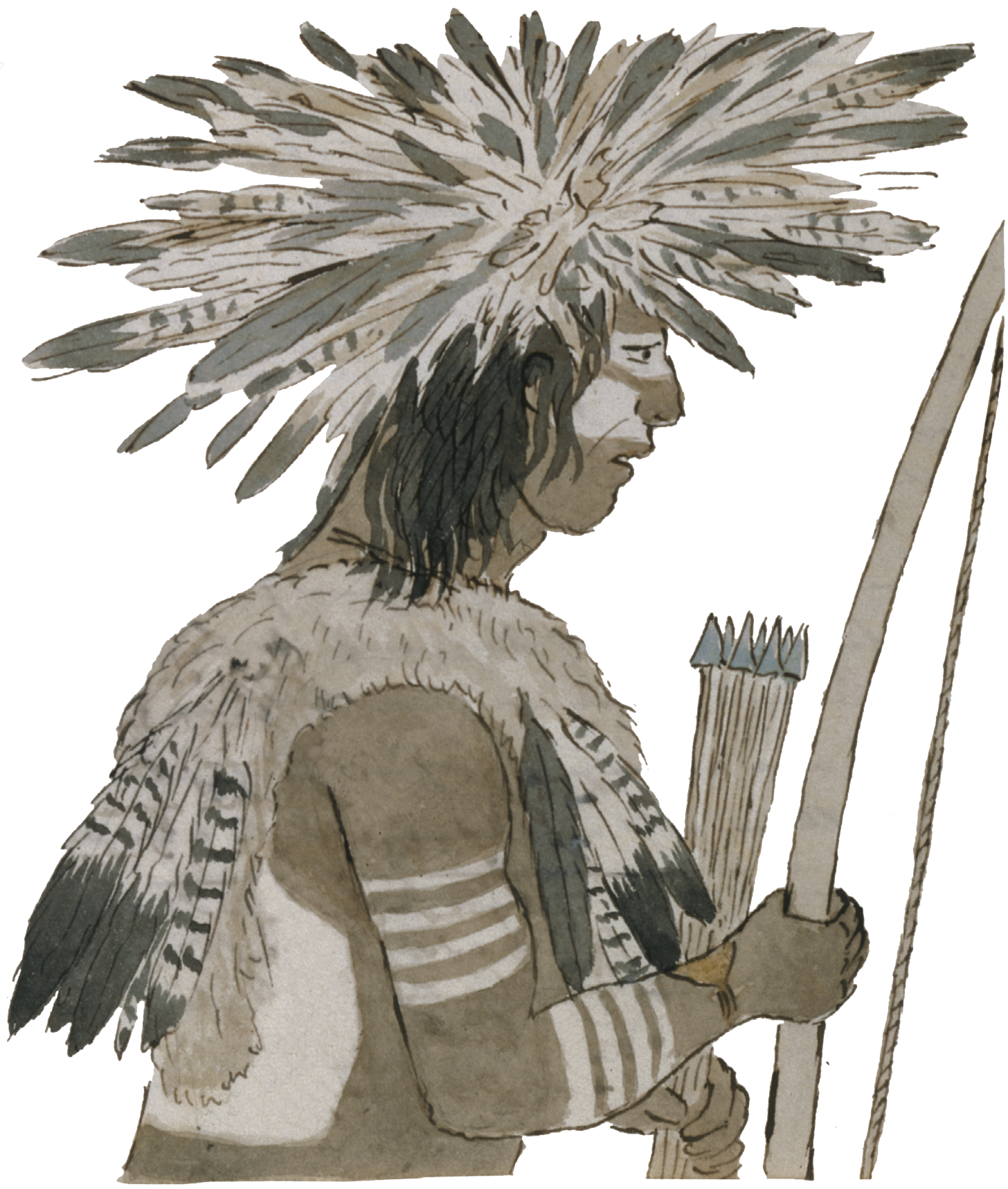 The sight of this dance was most interesting, especially when one thinks about it in connection with this highly interesting American evening. The moon was shining as fully and clearly as though it were day over the vast, interesting wilderness of the Missouri, which we surveyed right and left from this height; before us, the wild din and bustle of the grotesquely decorated Indians; on both sides in the woodlands, the loud, incessant, and rapidly repeated call of the whippoorwill—one could not contemplate this quietly exquisite evening scene without the greatest interest. As already said, the above-mentioned feather crowns bear the closest resemblance to those of the Brazilians; in the dance, too, they make use of calabashes similar to the Brazilian maracas or tamaracas (see the description of my journey in Brazil), in which rattling stones are enclosed.

In stature, the Omahas are said to be among the biggest Indians of this region; tall, athletic figures are found among them.M27 Finally I must also note that the old Otoe and Omaha women, whom I saw here, were, to be sure, very ugly, and several had inflamed eyes; yet their faces were not so flat as those of the Sauk and Meskwaki women. Although their eyes are less drawn down in the corners than those of many Brazilians, the racial relationship between both peoples is nevertheless unmistakable. Their small hands and feet, generally narrow hips, thinner legs with muscular body build, broad shoulders, and bony faces with strong features are unmistakable.[Page 2:54] It was late when we took leave of Mr.Cabanné and returned to the ship. At daybreak on the 5th, the Yellow Stone left this place. The morning was bright, clear, and very pleasant.M28At 7:30 in the morning, 70°F [21.1°C]. Not far beyond the trading house, where Mr. Pilcher had stayed behind and a young Englishman, Mr. Ashworth, had [come] along in his place, we lay to at the left bank and took in wood. Even before breakfast the journey resumed. The view back toward the buildings of the trading house remained with us for a while; the direction of the river from there downstream is due west. We saw the buildings directly behind us. To the left along the river were yellow bluffs overgrown on top with green shrubs and woodland; on the shore below in front of them, driftwood along limestone banks.

The river turns right; on its left bank are large alluvial bottoms covered with willows and plant growth. This [remains] the case for a long distance this morning. Large banks with driftwood; in the distance, the low prairie hills. The river turns left toward Council Bluff. We had navigated past Boyer Creek [River] to our right. Here Say had found a special kind of turtle (see Major Long’s voyage). Several times I saw black coots swimming along shore here.

We now approached a steep bank covered with short thickets, on the upper end of which we saw the ruins of the buildings of Council Bluff. Wild geese and ducks in large number were all in pairs. Of the ruins of the fort abandoned here in 1827, there now stand just the stone chimneys and, in the middle, a roofed supply house of stone. The Indians have taken away all other useable objects. The military post at Council Bluff was established here in 1819 and equipped for one thousand men, even though the 6th [Infantry] Regiment (now garrisoned in Jefferson Barracks), which was stationed here, comprised only about five hundred men. In 1827 these troops were withdrawn from here, and the post at [Fort] Leavenworth was established. The troops leaving Council Bluff took seven hundred cattle down with them. The fort, or actually the barracks, forms a quadrangle, with a bastion on two corners. 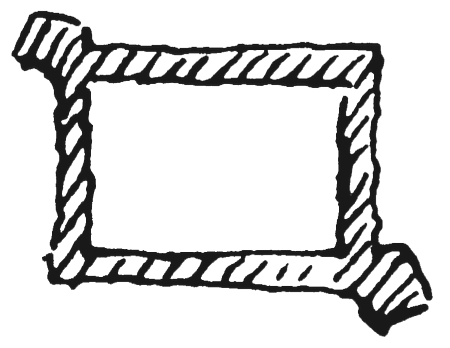 People maintain that the site at Council Bluff is far more favorable for observing the various Indian tribes than the one at Leavenworth, and some surmise that the troops will be transferred here again. Right before the place where the site was located is a high yellow bluff, cut off at an angle in the form of a turret; at this spot the river comes directly from the northwest.

Before we reached that place, one or a few paddles on one of the wheels broke. We let the ship drift back, because of a sandbar, made a short detour, and then followed the same bank. Behind the ruins the prairie extends with gradually sloping hills and ridges. At the edge of the high Council Bluff, we met Mr. Sanford and a companion who had come here by land. Before one reaches the bluffs (though nearby), there are ruins of a wooden house beneath the summit; it seems [to be] two stories, now nearly concealed by a few tall cottonwoods. Rattlesnakes in numbers are said to inhabit this lonely, desolate place now.

[Page 2:55]Mr. Sanford brought along a plant with blue blossoms, apparently an Aconitum. The bluffs we have just passed are 50 to 60 feet high and inhabited in their gullies and hollows by swallows: the round, semispherical nests always perch gregariously near one another; swarms of small swallows fly around them. 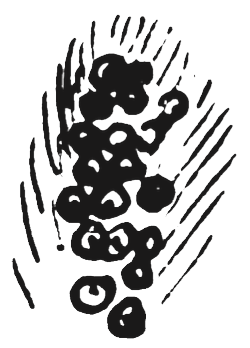 On these steep bluffs, too, one notices large cave-ins or landslides like avalanches. On the other side of the high bank, the alluvial soil begins again, densely overgrown by willows and cottonwoods. Here, somewhat inward, a military post [was] established in the first year, and at that time three hundred men died of scurvy in one winter (see [Major] Long’s voyage). Here at Council Bluff, down along the river, Mr. Sanford once found large molars of a mastodon, which he gave to General Clark in St. Louis, where I saw them. Presumably they had been exposed by the river.

A very strong wind has been blowing ever since nine o’clock today; sand from the sandbars is flying around everywhere. Somewhat inland, to the left above the bluffs, is a long pond, or pool, called Deserter’s Pond, in which Mr. Sanford caught several paddlefish, old and young. Along this Missouri bank is an exceptionally dense growth of willows, behind which is a band of tall forest. We struck a sandbar exactly at the time of our twelve o’clock pause. The thermometer then registered 77°F [25°C].

One and a half hours later, we had reached a place on the left bank, with very many snags, called the Devil’s Race Ground. We struck snags and sand, though without damage. The region [became] low-lying and monotonous until we again reached the surrounding hill chain; [the hills,] to be sure, were somewhat bare but had unique shapes covered with the most pleasing vegetation.

To the left To the right we are now following extensive sandbars; to the left, alluvial soil with prairie or willows, for a long time monotonously the same. Wild ducks in large numbers. Numerous large tree trunks in the washed-up soil; they project 15 to 20 feet horizontally out over the river. Occasionally one steers from one bank to the other; first this one, then the other one is higher. Willow sandbars with trees and sand blown into the air alternate with dense willow and cottonwood forests; other forest trees grow here and there where the soil is old enough. On the bank to the right there are now many tall trees, withered, probably because of fire. Then, along the right bank, there follows a beautiful lofty forest, which is shady and clear underneath; then a stretch of prairie. Everywhere on shore one sees individual sandpipers. Very many treacherous snags on the right bank; their bark hangs down in shreds and yet the branches stay green. To the left on a sandbar, large deposits of wood. Then on this side, [a] high bank, often angular and with corners sharply cut off like turrets, with alluvial land covered with dense, crowded rosemary willows and cottonwoods. An engagé, who brings a letter from the steamboat Assiniboine, is waiting for us on shore; he is taken on board.

Half an hour later, Soldier River, now a small creek, emerges picturesquely to our right in the wooded banks. The upper bank consists of short willow growth, the lower one of tall, shady forest, which stands out along the river like a bouquet but extends farther inland. Until evening the whole voyage proceeds along alluvial land. We run aground before dusk; the boat [crew] fastens the ship to the bank. Dark clouds rise all around; sheet lightning and lightning bolts [can be seen] in the northwestern and southern sky; finally the lightning becomes very intense. The thunder is somewhat audible, accompanied by warm wind. 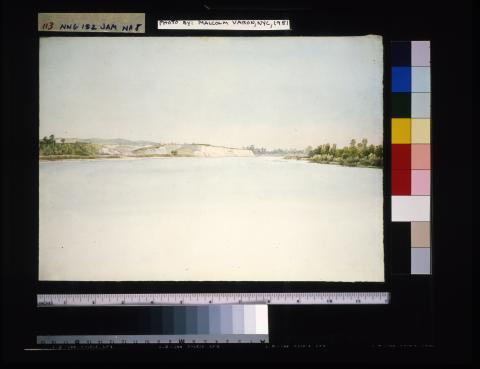