25 May: Early in the morning, slightly overcast sky, pleasant weather, light wind.[Page 2:89]M72 [Page 2:89]At eight o’clock, temperature of 63 1/2°F [17.5°C]. We set out early; at five o’ clock the mouth of the White River [was] to the left.M73La rivière Blanche. The Mandans call it Mönníh- Shott-Pássahä; the Hidatsas, Bíddi-Attakáhsi or Aú- Attakáhsch (‘Aú’ with strong stress); the Arikaras, HokahachKúss (‘ach’ velar, ‘kúss’ stressed); the Crows, Meníh-Attakánsä (‘e’ half [=ə], ‘án’ as in French). A rather flat region, green because of cottonwood and willow thickets. The hills are round and delicately green but not high here. Farther on, the black stratum of the right bank lies deep in the center of the steep bluffs; on the left bank, it now forms the dome of the hills. Half an hour later we reached a spot (of the black streak) that Mr. Mc Kenzie had seen burning just last year; this happens because the Indians set fires.

Somewhat farther on, we stopped to cut wood and make soundings of the shallow stretch of the river. This took place underneath the high bluffs , where there was a steep ravine. Here stood knotty old Celtis occidentalis. Clematis sent out vines on the ground. Hedera quinquefolia in the thickets. On the walls, several interesting plants, including Yucca angustifolia, with its white leaf edges, which was just pushing out its flower stalks; [it was growing] on top of the barren elevation. It has a thick, sturdy root and stiff, piercing leaves. The Oenothera with large white flowers also grew here on steep walls, and the first shrubs of Rosa [— —], whose flowers we preserved, were blooming. In the slopes of the ravine under an overhanging boulder, there was a nest, probably of a large Muscicapa, with white, roundish, moderately large eggs; the bird had a very blackish tail. We could not catch it.

One and one-half hours later, the boat returned and we moved on. Soon we reached a willow island to the right. To the left there were now argillite bluffs with beautiful ravines full of cedars and deciduous bushes. A distant view before us into the hill chain with [the] black medial stratum. The wind was growing stronger, cool and brisk. We made a detour around extensive sandbars; the boat was far ahead of us. To the left, lowlands with cottonwoods and willows, behind which hills rise. CootsM74Fulica americana. near the bank; today there are also many ducks in the river. To the left, a nice creek emerges from willow and cottonwood thickets.

A little farther on, we were aground for a long time; the keelboat was launched and pulled up along the bank. At twelve noon, 64°F [17.8°C]; a cold, raw wind is blowing. The keelboat went to the bluffs on the other side; twenty-nine men are pulling it on the cordelle. On the opposite bank there is low-lying land with burnt timber. Here Cedar Fort, which the Missouri Fur Company had built, was located; it perished with [the company]; the Indians demolished what remained. Now one sees only poles and chimneys (actually fireplaces). Just opposite this spot a stratum of the hill burned until 1823; consequently, a whole segment of the hill slid down. [This] still stands there, isolated, separate before the rest of the hill.

After being aground for a long time, we again came afloat and caught up with our keelboat Maria, which was now secured alongside the Yellow Stone. Between the bluffs to the right were picturesque gorges. On the opposite side, at the site of Cedar Fort, there are individual tall trees; otherwise, prairie with hills behind them. From Cedar Fort it is 15 miles to the Sioux Agency. The hill that had slid down [looked] very striking, 70 to 80 feet high, 150 [feet] long; it stands there, a steep bluff along the water. Its strata have suffered somewhat; they have burst and have hollows in them, here and there sunken, but they still hold together; they consist of argillite. At the ends of the landslide there are striking layers, regularly striped black and yellowish white, as though painted; clay and sand or various kinds of clay. Underneath every jutting layer of rock [there are] large numbers of swallows’ nests. Twenty minutes beyond Cedar Fort is Big Cedar Island, which remains to our left. It is large [and] overgrown with sparse forest of old cottonwoods and cedars; below, brush. Opposite the island, on the other bank, [there are] low grassy bluffs along the river; before them are many cedars, buffalo, and various other thickets. In these bluffs are many holes and clefts, perhaps enlarged by wild animals. In all the ravines where there is at least some brush, one can see pairs of turtledoves (Columba carolinensis).[Page 2:90] Cedar Island is at least a half hour in length; at the end, only cottonwoods and then, finally, willows. Opposite, bare, steep, reddish gray clay banks or bluffs; behind their ravines, not far from the river, conical hills rise up, some of them strangely uniform; they are overgrown with grass. On the hills the black middle streak continues; the ravines of the bluffs are completely filled with cedars. Blackish gray and partly barren coal-black hills (that is, their top part), now close to the river on the right hand; to the left before the hills, a low plain with cottonwoods and willows.

Somewhat later we cross the river and follow the opposite bank. Here there is a stretch of flat land about 150 paces wide; then the hills, which are steep. Above is a plateau; the slope is overgrown with cedars and deciduous brush, with a bare, grassy growth on top. A pelting rain lasts all afternoon. In the afternoon About noon, wood was cut on the left bank. Somewhat farther, on the level ridge of the hills, there formerly stood an Arikara village, but the Dacotas (Sioux) drove them away. On the opposite side was Fort Lookout, where the French Fur Company had a trading post. Later the various companies combined under the name American Fur Company.M75 It was near Fort Lookout where Major O’Fallon had sent for the limestone skeleton he gave me as a gift. More about this later. On an elevated green ridge we caught sight of several Sioux (Dacota) graves of various kinds. Most of them consist of a scaffold of four long poles, on the top of which the dead person lies outstretched, tightly wrapped [in hides]. There were several of them here, usually on the tops or ridges of the hills; [for] some of them only several stakes remained. [In] other instances, the dead person is buried in the ground [with] stakes and brushwood all around. This enclosure on all sides is a protection against the wolves, which are numerous here. In one of the latter a chief’s son is said to be buried in an upright position. 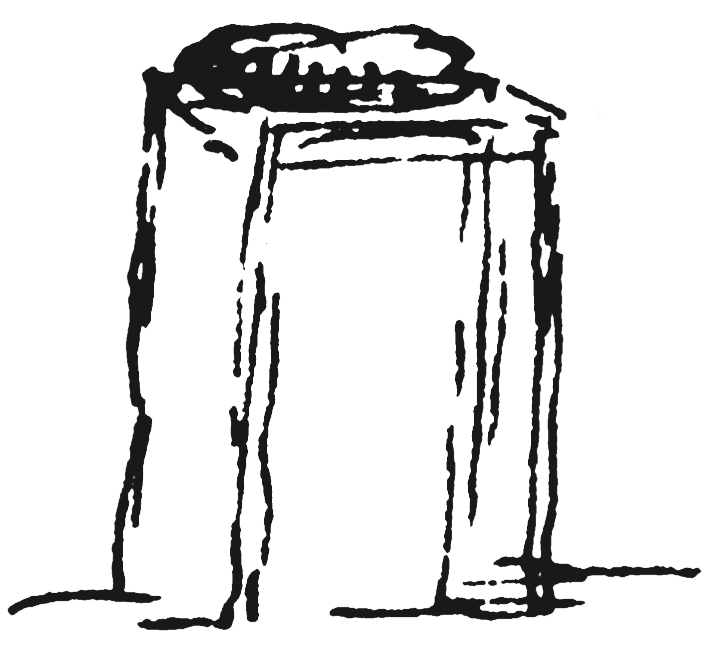 Somewhat farther on, at the promontory to the left, which is formed by the Missouri at its bend toward the left, we caught sight of the buildings of the Sioux Agency, to where Major Bean and Mr. Bodmer had hastened ahead of us yesterday. We sailed in a curve to the opposite bank and saw the white and red population, about forty to fifty persons, assembled there. Several welcoming cannon shots that the Yellow Stone fired off were answered by the raising of the flag on the flagstaff. We welcomed our fellow passengers on the bank, gazed in wonder and delight at the interesting Dacota Indians, and then sailed about a mile farther to a forest, where we took on wood and halted for the night. In order to get to know these interesting Sioux, I returned while it was still dusk to the agency, where Major Bean received me in a very friendly manner, even though he was burdened by several visitors, since he did not have facilities here for so many people. The fort, or house, contained several rooms, where we slept very comfortably on buffalo hides and woolen blankets.