22 May: In the morning, very nice clear, pleasant weather, warm sunshine. M69At 7:30 in the morning, 54°F [12.2°C].Major Bean had ordered riding horses, which had now arrived from his agency; meanwhile, he wanted to go there by land, and Bodmer accompanied him. During the night the river had risen greatly; a keelboat was expected so that goods could be loaded onto it and the journey then continued. On the previous evening, we had obtained several new specimens, including Podiceps cornatus auritus, or a very similar bird, and Fringilla grammaca, which Say first described from the prairies to the Rocky Mountains. The Podiceps was shot from the steamboat on the river; thus, it must nest here.

At 8:30 we were called ashore in order to lighten the ship; a large part of the crew went about a mile through the prairie [and] the ship was successfully moved over the sandbars. The bell called us back, and we ran straight down from the hills, through the tall prairie grass [and] thick willow thickets to the bank. Here we saw that the steamboat once again was unable to get away, but after half an hour it reached a better depth again [and] quickly moved ahead. All of us had to clamber several miles in deep mud along the bank [and] over rocks underneath the bluffs and finally wade through willow and cottonwood swamps to follow the ship, where we arrived several hours later, bathed in sweat.

About eleven o’ clock the steamboat departed. We soon had bluffs along the left bank; level willow and cottonwood thickets to the right. Soon, before the prairie prairie hills on both sides, a border of timber, behind which the prairie hills arose. At twelve o’ clock, 67°F [19.4°C]. On both banks of the river, we saw most remarkable hills, some of them with various kinds of domes towering up high. One clay hill on shore had been hollowed out like a big oven; others farther back on the prairie looked like demolished towers, some of them like ruins of buildings of this sort.

Along the bank there were intermittent bluffs. A series of them, which we now reached, had very many black areas in which we saw black, gleaming debris, probably bituminous coal, which commonly occurs here. Some of these black strata have burned; one of these domes [fires] died out barely a year ago and had probably been burning for three years or more. Directly behind this hill, a small creek emerges. If one is at the center on the river and looks in a circle along the range of high surrounding hills, one is taken aback not a little at the sight of the wide stripe, or stratum, surrounding all these hills at mid-height. It is substantial and lies exposed everywhere, and on both sides of the river [it] is found at an exactly equal height. According to the assurances of those well acquainted with this region, it is said to consist of a friable black argillite; I shall examine it in the near future. It is found on all the hills and disappears only in the ravines. It is probably these strata that catch fire here and there. This region, or rather several strikingly formed hills in it, are called Bijou Hills, because a certain Bijou, now an old man and Fur Company clerk, spent several winters here. He now lives in the vicinity of the Mandans.

We were soon hard aground; the boat took soundings; finally we again inched forward a little along large sandbars, which remained to the left. Several hours later, however, we had not moved even a mile farther. Both of Major Bean’s men rode with his horses along the bank beside us; when night fell we saw their fire burning. We were now directly opposite the Bijou Hills. They appeared as broad, high domes with several humps, or peaks, which rise particularly high above the remaining hill formation of the region. (See Bodmer’ s sketch of one of these hills.) We lay aground here, and even at eight or nine o’ clock we could not get away from the sandbar, even though a large part of the crew strode with such force from side to side on the deck in order to tilt the ship back and forth that it was practically impossible for me to write these lines.[Page 2:85] Today one of our young men again experienced the ill effects of poison weed (Rhus radicans) on his face but to a lesser degree than previously. The evening was cool and windy; fire was burning in the cabins; the wind did not subside that evening, and the sky remained overcast. 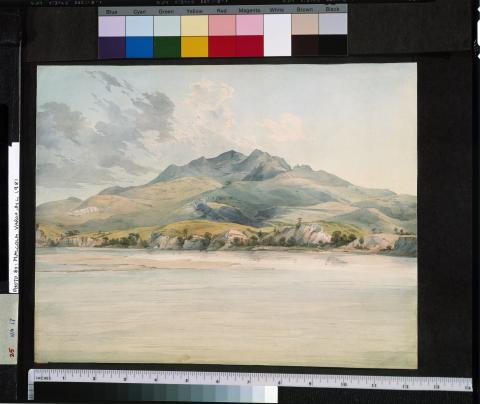