24 August: Early in the morning, nice, clear weather, hot. At 7:30, [— —] °F.M35At 7:30, 77°F [25°C]. During the night a violent, gusty wind had been blowing. A guard called out that fire was consuming the pile of charcoal. Flames burst out and in a short time had completely destroyed it; thus three or four days are completely lost. Bird and most of the Piegans had crossed to the other side of the river into the area where we had recently selected the site for the new fort. Indians were at our door early and immediately wanted to smoke, especially Hotokáneheh and his wife, who always accompanies him. Several times they have taken away Indian leaves and tobacco from us. The Spaniard, Isidor Sandoval, intended to go hunting today with his companion, Loretto, both from Santa Fe, to shoot an antelope for us, but he sent out four Indians [instead] and stayed at home. The Indian who was here yesterday with his wife brought her this morning. She had painted a few red stripes on her face and was sketched. Hotokáneheh brought me a bird from the Rocky Mountains ([— —]). Bear Chief, Nínoch-Kiä́iu, came to Mr. Mitchell and announced that he was going into the neighboring area with his [tipi]. Undoubtedly he is going where most of the Piegans and Bird have gone. For the time being we have not been able to draw him, but he will return and then he must be sketched.

At twelve o’ clock, 80 1/2°F [26.9°C].[Page 2:240] It was very hot. In the afternoon several Indians arrived from the distant Piegan camp and told us their people would arrive in three days. They brought several beaver pelts to exchange. We saw several strange faces. In the heat we again had numerous annoying visitors, who were attracted by the stuffing of [the] bighorn. Mr. Bodmer sketched the young woman, who, however, simply could not maintain the same position. She was ill today and had to leave repeatedly. In the evening the weather was very pleasant, but on the prairie, the mosquitoes were somewhat annoying. We went to the camp of the Piegans, where fifteen [tipis] in all were still here. A circle of Piegan women amused themselves with games. They had placed three small piles of glass beads among themselves, for which they played. One had several pebbles in her hand and moved her hands back and forth in time with the chanting. One or the other makes a guess, and this way they win or lose. We saw their quite-small children, barely a half year old, already quite brown. In the circle of about ten women, there was one without a nose.

In the cool of the evening, while sitting in front of our doors, we had a long conversation with Mr. Mitchell about the abuse of selling whiskey to the Indians, as a result of which they become bad, dissolute, [and] lazy, as well as dangerous. Then they neglect to sell the whites good hides and goods. The women, who know only too well that they will get nothing for their work—because the men immediately buy whiskey and bring nothing substantial home—tan the hides only partially and poorly. The men neglect beaver trapping and become totally dissolute and bad. In 1816, immediately after the war, the government enacted [a] law forbidding the sale of whiskey to the Indians, and only so much of this beverage was to be allowed into Indian country: [enough] so that every man who was carrying on trade with the Indians (that is, was working for the fur companies) could have enough for his own needs, estimated at a half-pint a day of whiskey, but no drink for trade. Recently this has been changed, and no whiskey at all is to be imported. The Indian agents (who are always supposed to live among the Indians), as well as all military posts, have been ordered to keep an eye on the importation of alcoholic beverages. But they not only do not live there, they [go] there [only] once a year [and] let everything go unpunished (some of them are related to the principal men in the Fur Company), and yet the government pays them very well and every year, through them, gives the Indians substantial presents. If these gentlemen did their duty, the harmful use of whiskey among the Indians could largely be controlled. In the Fort Mc Kenzie region, the law of the government of the United States [could] not be [practically] introduced, for all the Indians living up here can obtain as much whiskey as they want from the English. If they were not given any by the American Fur Company, trade would totally withdraw from here and turn to the English. Among the Mandans and the Hidatsas, there is no whiskey at all; Mr. Mc Kenzie has no supply of it there at all. Toward evening dark clouds arose, which concealed the moon (the “night-sun” of the Indians) from us. 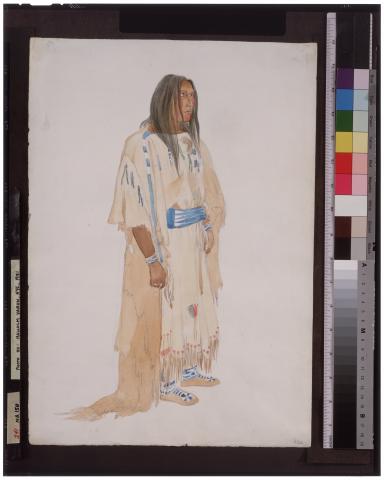