9 November: In the morning, clear, beautiful weather, bright sunshine. A strong wind, but less raw, from the west. In the mid morning I went onto the prairie and looked for [Page 3:26]plant seeds but saw no living being, [just] numerous holes in the ground, [made by] the Arctomys hoodii (called suisse here), and prairie fox burrows. Everywhere on the prairie, Mandan women, loaded with bundles, could be seen moving from the villages toward the forest. They panted under their burdens. Many horses were loaded, as well as dogs, and one could observe funny scenes when some horses threw off [their loads?], kicked, and ran away. 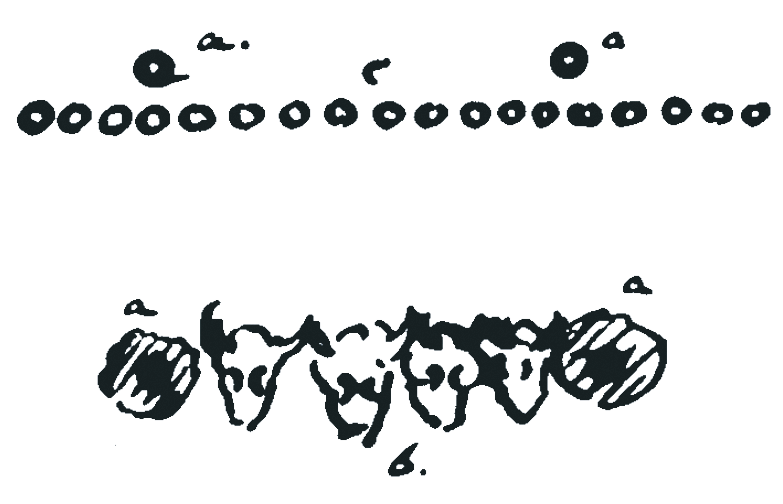 I went past the scaffolds behind the Mandan village Mih-Tutta-Hangkusch and found here a strange arrangement. To make medicine (probably) they with had stuck four poles [into the ground], the two in front with a small heap of turf at their base, [and] between them four buffalo skulls [were] laid out. Eight to ten steps farther back [there] was a long row of about thirty twenty-six human skulls.

Behind the village the hide of a white buffalo cow on a high pole streamed in the wind. [This is] an item of high value for these people. More about it on page [----]. They consider the killing of such a cow as important as killing an enemy, and they purchas [such] hides at high prices. Often the hides are dedicated to their gods (God, the moon, the sun, or Adam, as they are called here) [and] are left to decompose. A very recent grace was covered with red cloth. There was no lack of new graves. Many [people], particularly children and women, had died during an epidemic of a kind of whooping cough; [others] were still dying. In the afternoon Mr. Bodmer went with Mr. Kipp into the Mandan cornfields to shoot prairie hens. They went a long way but brought nothing back with them.

A few young people [who] wanted to tease Bodmer did the war whoop, set their bows, and acted as if they wated to attack him. He did not know what it was about [and so] cocked his gun [and] took [it] into his hands several times until Mr. Kipp came along.

Several distinguished Indians visited us today, among them, the Mandan chief Mató-Tópe, who liked our Indian portraits very much. He recognized several of them. This is a noble man, upright, and proud. He has often given away items of great value [when] they were [simply] considered to be interesting or nice [by the person receiving them]. On some occasions his kindness was repaid with ingratitude, and he behaved nobly. The painter Catlin, who was here last year, ordered from him two attractively pained buffalo robes of great value. Mató-Tópe made every effort to paint them very beautifully [and] also bought two expensive elk hides for that purpose. Catlin gave him in return only a few small, insignificant thing. The Indian not not accept this gift but handed it back, saying that, since Catlin must be a very poor man, it would be [Mató-Tópe's] pleasure to give him the hides as a present. As generous as he is, his glory in war is [as high]. He campaigned with the Hidatsas against the Cheyennes. When [the warriors] met on the prairie, a Cheyenne chief rode forth and called: "Is Mató-Tópe among you?" [Four Bears] rode out right away. They dismounted and went at each other. They shot at each other. Mató-Tópe's powder horn was shot to pieces [and] his shot missed. Then they jumped from their horses. The Cheyenne wanted to stab [Four Bears] with his knife, but the Mandan was faster [and] grabbed it, wounding his hand; with [that knife he] stabbed the enemy chief to death. Mató-Tópe has the most coups among his people and is very respected.

All these Indians smoked Mr. Kipp's pipe every time they gathered; he hands out a few hundred pounds of tobacco yearly for this very purpose. A Mandan from Mig-Tutta-Hangkusch, named Sih-Chida ('ch' velar), Yellow Feather, invited Mr. Kipp and me to visit a festival. We went to the village. The lodge was spacious, rather bright, round (I measured one as 60 paces in circumference), [constructed of] polies on the inside, connected with crossbeams, covered [on the exterior] with turf and soil, and made very tight. At the top in the middle is an opening [that serves as a] chimney, partially covered against the wind with branches and thorns. Below this opening, a small hole dug in the center for the fire. On the wall were all kinds of implements -- [bullboats] and so on, hung and propped up. We sat down on buffalo robes and received a wooden bowl with cooked corn and beans; another one [contained] black berries with a flat, round stone [seed] called by the French olises.M2Alises (Viburnum?) They seemed to have come from a Viburnum. After we had eaten, [Page 3:27]our host started the pipe and [handed it around] to the left for smoking. Thereupon we stood up and left without saying a word. This man, Yellow Feather, is the son of a famous man of his nation, called les Quatre Hommes [Four Men], who died not long ago. About evening, rain and strong wind. 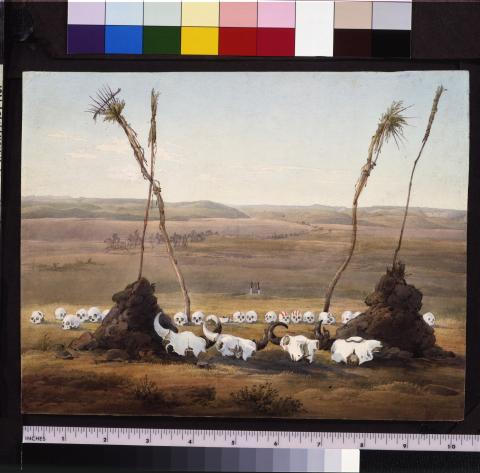