13 November:M5Temperature at seven thirty, 44 degrees Fahrenheit [6.7 degrees Celsius]. In the morning, bright sky, raw strong wind from west. At nine o'clock, a Mandan with a very concerned face came and told us that there had been an extraordinary sign in the sky. Shooting stars had [soared] toward the west last night in [great] numbers, but far more than usual. This meant war or high mortality among humans. He asked what Mr. Kipp thought about it.

Later, other Indians came: Ah-Dä-Pússä Dipäuch (Broken Arm Leg), Síh-Chidä (Yellow Feather), and another handome man with noble features, Ah-Ih-Dä-Pússä (Striped or Spotted Arm). All of them spoke about the meteor [shower], so inexplicable to them. After ten o'clock the weather [was] bad, completely gray and stormy; it snowed for a while. Another Indian, Ádeh-Pússä Beróck-Itaïnú (Bull's Neck), appeared in mourning, poorly dressed and smeared with clay. A child of his had died [of] whooping cough, currently epidemic. Also, a Mandan woman died today of stomach problems and cramps.

Mató-Tópe visisted us with his wife and child. The child was strong, round, very cute, with beautiful, large eyes; he was completely naked. His name was Mató-Berockä́ (Male Bear). [Mató-Tópe] had a horse and baggage with him, also his medicine drum, black with red figures representing lightning and buffalo tracks. The background is black; the figures are vermilion (see Mr. Bodmer's sketch). 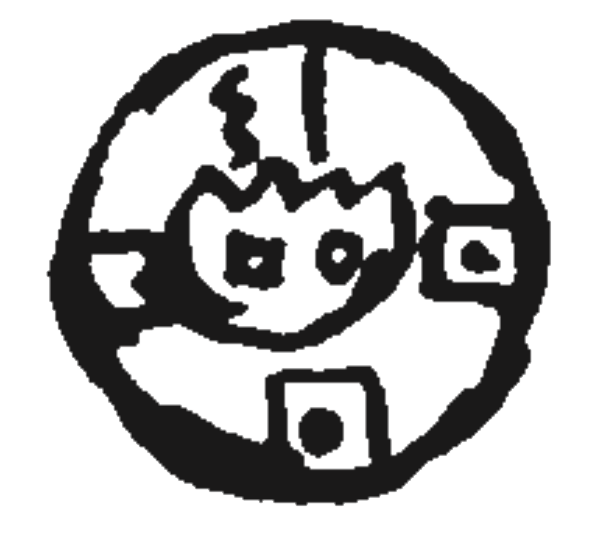 Almost every lodge has such a drum -- a skin stretched over a broad hoop.[Four Bears] also brought along a lance, a beautiful bonnet of war-eagle feathers, and a few other things. He stayed a few hours and then went to the forest. Later Síh-Chidä (Yellow Feather) came, too, as well as several others. They looked at the drawings with great enjoyment. The Indian just mentioned drew Mr. Bodmer and me, and he cannot be denied some talent. [At] twelve o'clock noon, 44°F [6.7°C]. Wind in the afternoon extremely strong and unpleasant, cold. They worked intensively on our dwelling, but the cabinetmaker was missing. A common engagé did all the work. They possibly still expected Mr. Lamont, and [if he came,} perhaps Mr. Kipp would have to move into the new house with us. A few wagons daily went to the lower forest to get some wood; there was no supply of it [in the fort]. There were too few people here for the work. 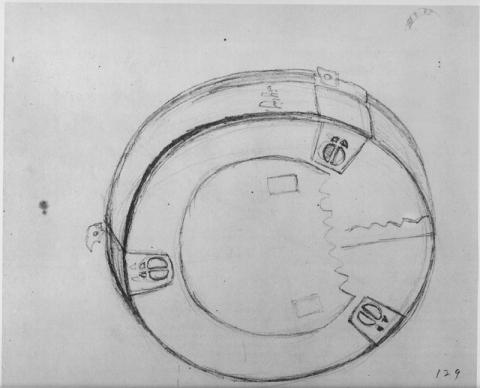