11 November In the morning, very nice and clear weather. In the night, freezing and heavy hoarfrost. At eight o'clock, 26 1/2°F [−3.1°C]. Wind [from the] west. Early, Belhumeur rode [out] with a man and two packhorses to hunt bison, because we no longer had fresh meat. Also early, two women worked [on] the scaffold for the women who had died yesterday. They cleaned the place and covered the dead [person] with a blanket. Meanwhile, two of [her] relatives sat [atop] a lodge in the village and cried and wailed while looking at the scaffold. [The bereaved] mourn for four days at the grave. More about these items in the chapters that deal exclusively with these nations.

At twelve thirty,41°F [5°C]. After lunch Mató-Tópe came, also Péhriska-Rúhpa. They looked at the Indian portraits. The latter was in his nicest clothes, which he had [obtained] from the Crows. He had a horse [equipped with] a colorfully ornamented bridel and buffalo-saddle. The quiver was of panther skin, like [those seen among] the Piegans, and was hung at the rear [of the saddle]. The bow was covered [backed?] with elk [antler] or bighorn and was decorated with colorful cloth, white and blue pearls [beads], and at the upper end, a tuft of sulfur-yellow horsehair. His clothes were very rich and beautiful. He wore an upright tuft of black feathers on his head; another one of owl feathers hung from the back of his head. At the [top] center and transversely across his head, [he wore] a white ermine. [His] hair was hanging down [at the sides]; a tuft [hung down his] forehead to the nose. Around his neck he wore a beautiful bear [claw] necklace edged on top with otter skin. The leather shirt was reddish yellow leather with yellow porcupine [quill] strips edged with fine blue [beads] down the arms. Colorful [tufts of] horsehair [and] ermine, and plaits [locks] of long human hair hung down [from the sleeves]. 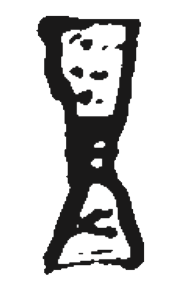 In his hand he carried a broad braid of scented grass (Anthoxanthum odoratum), with which he wiped his mouth and nose at all times. On each side of his forehead he had fastened the familiar ornament of the Hidatsas. His leggins were rather plain. He did not stay long; [he] is said to be a great enthusiast of riding around.

Several Indians always stayed in the fort with us, among them a tall Hidatsa who borrowed beaver traps to go trapping. He had with him a homely wife with a broad, flat face and an even homelier child with a broad nose. The woman had magnificent white teeth, like all these people. The child was wearing a very large necklace of elk teeth. One must pay a horse for 100 to 200 [elk teeth] here.

Beaver trapping was very dangerous [at this time]. Assinboines and Dacotas roamed very close and could easily kill the individual Indians [out] trapping beaver. Just three weeks ago, three Assinboines shot a Mandan near a sandbar across the Missouri, very close to the fort. They made signs [asking] to be taken across. A Mandan [man] crossed [over] with two women and was shot. The enemies immediately hurried away and came across three Mandan women in the forest, who most certainly assumed they would die and wrapped themselves in their robes, but they were not harmed. In the eveing, [a] severe, but not cold, wind out of the west. Night dark because there was no moonlight. 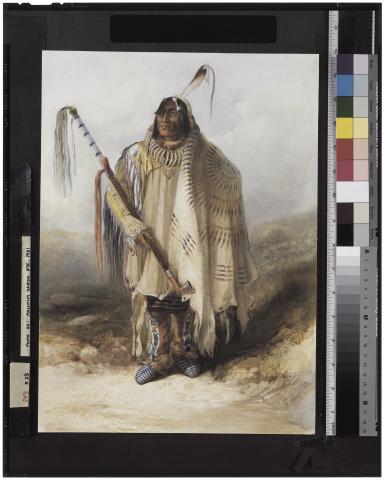