17 May: In the morning, wind and torrential rain. The canal in town is opened and discharges; a large number of gulls, especially Larus ridibundus, all of them with attractive plumage and black heads, flock together above the turbulent water at the mouth; some of them have black tips on their tail feathers, probably young birds; they also have several more spots on their wings.

There were also several Larus canus. They look for refuse in the eddy of the canal. A crow picked something up and was pursued by them. In the vicinity of Helvoet are wet lowlands with many lapwings, common redshanks (Totanus calidris), ducks, and herons, as well as snipes and sandpipers.

Today, too, like every day in boring Helvoet, we take our regular stroll. The pier, on both sides of the canal before the town, ⟨[is constructed of]⟩ large piles driven into the ground, beams connected crosswise, ringed by a gallery. From spot ‘a’ on this pier

we saw the vast expanse of water; before us the coast of Goeree Island; an hour or half hour to the right, the ocean. Ships sailed in and out, depending on the wind; at the outlet into the ocean, five gunboats lay at anchor. (See Mr. Bodmer’s representation of such a gunboat.)

In the afternoon the brig Janus suddenly appeared in the canal. We went there and saw it moving down through the locks, then returned to Helvoet, took care of our affairs on land, and then boarded the ship at nine in the evening, shortly before the harbor area was closed. We slept very quietly on board that night. 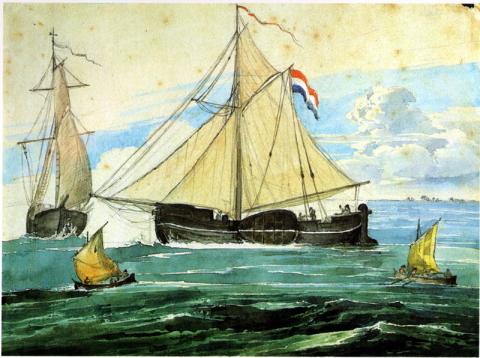