16 May:Beautiful weather. Mr. Bodmer sketches the ship De Jonge Adriana and the distant coast of Goeree Island from the pier, which extends 100 paces before the lighthouse. Skippers and pilots pass the time on the pier. They converse with us and show their loyal spirit and love for king and country. We are waiting for our ship, which now has a favorable wind. Toward noon several brigs pass through the locks of the canal and then immediately put out to sea. Others anchor off the coast of Helvoet. In the afternoon De Jonge Adriana left port. Several small ships followed. In the evening, ⟨[a]⟩ stroll up along the coast. 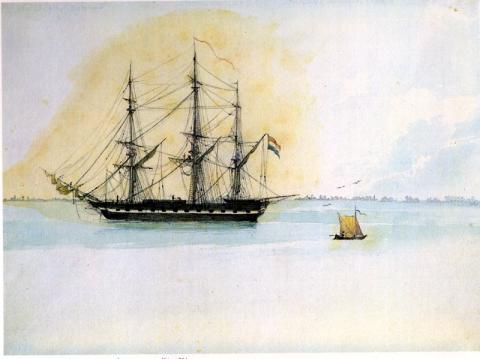