6 June: Overcast sky but good weather and wind. We are running about 6 knots or miles per hour. After breakfast we examine the charts and books belonging to the ship. These include Elford’s Marine Telegraph, a signal book with the following title:

J. M. Elford’s Marine Telegraph, or Universal Signal Book etc. being also the Key to the Patent Telegraph, invented by the author, capable of making 9330 progressive changes, by using the figures from 1 to 6 only. Published and sold by James M. Elford etc. Charlestown (S.C.) by Archibald E. Miller, No. 4 Broad Street, 1823.

The flags are depicted here; with six numerals, 9,330 variations can be produced. They are all blue and white. The Janus also had these flags. First, the conversation flag is hoisted; it is the one following. 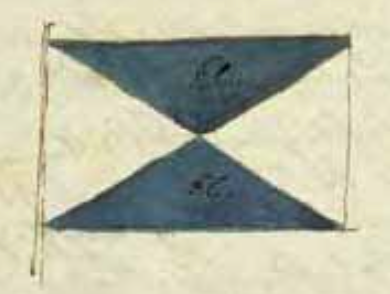 Then follows what one wishes to say with the use of the following numbered flags. There is also information and a sketch about land telegraphy in this book, which all American ships carry and in which one finds a list of all ships appearing in American harbors according to the ships’ numbers.

At about ten or eleven o’clock, the first Portuguese men-of-war (Physalia) appear, about three or four of them, with several jellyfish or related mollusks of bluish violet color, some of them yellowish or yellowish red on the bell or umbrella.

A flock of twenty to thirty petrels appears; they are probably hunting for a dead animal. Midday observation: latitude 43°30', longitude 30°44'. Temperature of the air 12°R [59°F, 15°C], of the water 11 1/2°R [57.9°F, 14.4°C]. In the afternoon, very little wind; in the evening, calm, therefore innumerable Medusa pelagica and also Portuguese men-of-war (Physalia) come floating by. We catch several of the former. The salpas (Salpa) swim at a greater depth in the ocean, and the sun’s rays are refracted so marvelously by their bright glassy bodies that one believes [one is] seeing sparkling gems: ultramarine blue, green, golden-colored, etc. Individual petrels hover around us. Single bird feathers, too, float everywhere on the surface of the ocean. Individual bits of Fucus, apparently Fucus vesiculosus.

In the evening a petrel alights near the ship, which it did not appear to be afraid of, dipped its head into the sea, and seemed to be eating something. My guns were packed away, and before Skipper Robbins’ musket could be loaded, it was gone again. During the night almost completely calm.