5 June: Toward morning, more wind. A strong northern breeze blows us forward. All sails are crowded, and we are running at 6 1/2 knots. Sky rather clear, air cold,since it comes from the north. All of us saw several varieties of petrels soaring above us the previous stormy days: Procellaria pelagica; another species, white like a gull (perhaps Procellaria glacialis), but black and white; another one grayish brown above, rust-red underneath. We do not see any fish at all. On the evening of the fourth, a small mollusk was found on deck, probably a salpa of this size and shape. The spot at the base of the animal very beautiful, violet and blue.

Even today, the fifth, the strong breeze lashes the sea to some degree, which holds back the ship’s fast pace somewhat. Noon observation: latitude 44°20' north, longitude 26°59' west. Today, for the first time in nine days, I could again think about my journal and add what is written here; but the motion was so strong that one can write only very poorly, crookedly, and at an angle, as these words reveal. Our clocks were not wound during the dismal period of bad weather, therefore we cannot make any observation of the magnetic needle and must wait until we reach Boston to set them again.

Several petrels fly around us. Afternoon very nice, air fresh, sky clear. The sailors repair the torn rope ladders (stays and backstays), grease the masts, partly with tallow and fat, so that the sails can slide up and down more easily, and they also smear their rain gear, made of thin yellowish material, with boiled oil, so that no rain [Page 1:8]can penetrate it. They also have similar, very practical rain hats of tarred or oiled canvas. On the back of the hat, there are strings with which it is firmly tied on. 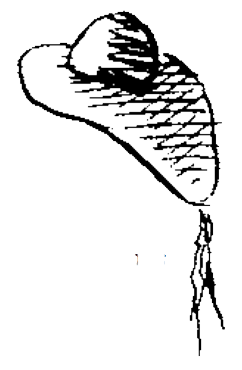 American sailors, of course, do not differ from English sailors. One young man among them had six fingers on one hand and six toes on both feet. All day and during the night the weather remains uniformly good. Beautiful moonlight during the night, and we again sleep peacefully.