30 June: Nice, clear, and sunny morning; sea smooth as a mirror. During the night the lead was cast and did not reach bottom. At eight o’clock, temperature of the air 8 1/3°R ⟨[50.8°F, 10.4°C]⟩, of the water 7°R ⟨[47.8°F, 8.8°C]⟩. Swimming seabirds with their white breasts glisten on the splendid blue surface of the ocean. Individual Procellaria pelagica take the fat we toss out. At nine o’clock the lead is cast once more but again does not touch bottom. Today we have been at sea for forty-four days; ⟨[we]⟩ are only one and a half days from Boston and cannot get there. About ten o’clock the boat is lowered, and Mr. Bodmer makes a very accurate sketch of the Janus. The captain and Dreidoppel accompany him. The former killed a Procellaria pelagica and fired unsuccessfully three to four times. Since a light breeze finally rises, the boat is hauled up again at 10:45. Several flights of petrels sit on the surface of the ocean and rest. The captain, scarcely on board, shoots a second Proc. pelagica. We got both of them. Dark-brown fish play around the rudder. A yellow streak on the sea, about two feet wide and over a quarter of an hour’s journey long, perhaps marine plants.

Noon observation: latitude 42°10' north, longitude 66°4' west. Temperature of the air at twelve o’clock, 10 1/2°R ⟨[55.6°F, 13.1°C]⟩, of the water 9°R ⟨[52.3°F, 11.3°C]⟩. Since twelve o’clock yesterday we made these tacks: 1. from twelve to eight o’clock north-northwest, 28 miles; 2. from eight to twelve o’clock southwest, 16 miles; from two to four o’clock calm; likewise calm until almost twelve o’clock. Fucus vesiculosus is fished out of the sea. The material forming the long yellow streak has attached itself to our boat; it appears to be a decayed, byssus-like mass of marine algae. A considerable breeze in the afternoon. We move somewhat too far to the north, about 4 to 5 knots. The weather warm and pleasant all day. In the afternoon the unfavorable wind became very brisk; we had hoped it would shift after the calm, but in vain. In the evening it became so strong, and the movement of the ship also, that we forgot to read the thermometer. During the night the wind became very strong, the sea very high. The sun had already indicated this while setting, for it was surrounded by quite particular clouds that signify wind. 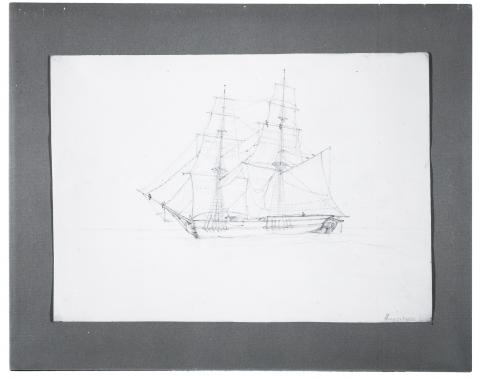 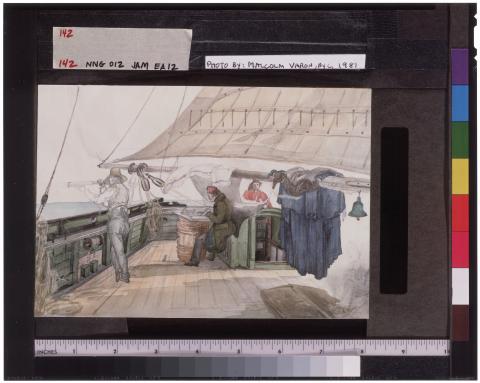