21 June: Overcast sky, wind northwest, contrary; our course, unfortunately, southwesterly again. No change can be observed in the sea. At seven thirty, temperature of the air 5°R ⟨[43.3°F, 6.3°C]⟩, that of the water 3°R ⟨[38.8°F, 3.8°C]⟩. Our breakfast consisted of very tasty fried porpoise meat. At eight thirty at least six large blackfish or bottlenoses swim around us very closely; they have a dorsal fin and very thick, round tails. Dolphins in large numbers toss white foam up from the sea. Someone shoots at one of the blackfish, and it most probably took the whole shot. Since [Page 1:15] the wind died down almost completely again, they hove to and cast out the fishing hooks with the lead but did not catch anything. Therefore we soon sailed on. 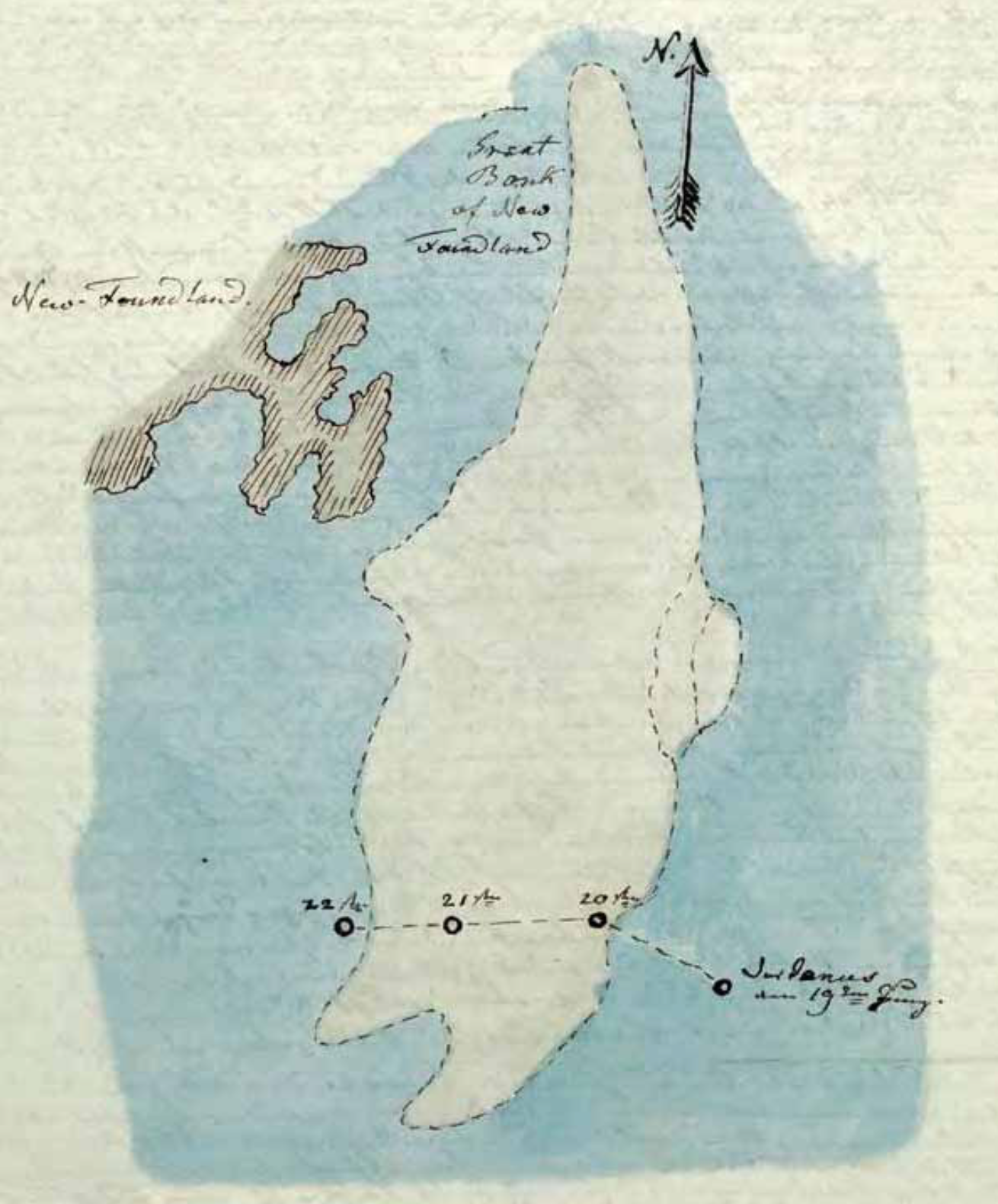 is 570 miles long from north to south and 180 miles wide at its widest point. The water is 30 to 40 fathoms deep, and the Bank is said to be completely overgrown with Fucus (rockweed), in which countless fish, especially codfish or stockfish (Gadus morhua), halibut, and other varieties live. These fishing grounds are very well known. Every year about 150 schooners, two-masted ships of 60 70 to 80 tons and a crew of eight to ten men, go there from the American coast, stay on the Bank for several months, and fish. They return when they have a full cargo.M12Such a ship probably has 33,000 fish or more when it returns, or 900 quintal (pronounced käntel) of 112 pounds. The salted fish are rinsed out and dried on land. These fish are caught with entrails and with the shellfish and clams (Glycimeris and other varieties) found in the entrails and used as bait on the fishing hooks. In America these fish sell for two to three dollars (five to seven and a half florins) per hundredweight. They are also shipped, especially, to the West Indies. Many ships from France also come here to fish. A French brig had been seen early in the morning; the fishing ship from last evening was no longer visible.

A large number of storm petrels of different species, perhaps twenty of the usual large kind, swim in groups beside the ship. Toward noon, numerous schools of blackfish and porpoises. The former are fat and round; they have a thick caudal fin sloping back and a quite round, globular head, somewhat like this. 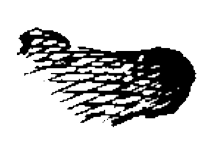 We shoot at several of them, at quite close range, and certainly hit them too, but they slowly disappeared. They are much slower than dolphins. They seem to have two dorsal fins, also. One notices something resting next to the first of the large blunt and thick dorsal fin: a small body, which the sailors explain was a sucker (probably suckerfish, French echeneis). The head of this dolphin is so round and thick that one could call it globiceps. All afternoon these dolphins surrounded us in large numbers, also schools of porpoises; often we saw twenty and more together, a remarkable sight. They puffed and blew water vapor, though not an actual jet; wherever they surface, one sees white foam and in it a section of the back with the dorsal fin. Today the harpoon was hurled at the dolphins without success.

At noon, pleasant weather but very cool. Observation shows latitude 43°15' north and longitude 50°00' west. Temperature of the air 5 1/4°R ⟨[43.8°F, 6.6°C]⟩, that of the water 3 1/3°R ⟨[39.5°F, 4.2°C]⟩. In the afternoon, almost calm. A guillemot (Uria troile) swam beside the ship. The captain shot it and had it fetched with the boat. It was incorporated into the collection. All afternoon and evening we had very light wind and saw no more cetaceans either. Very cold in the evening before dusk. The dense fog returns and there is precipitation. During the night the wind is somewhat better, though very light.