18 June: Dense fog covers the ocean. It is extremely wet on board; the sails drip with water. A studding sail was torn during the night. At eight o’clock a school of porpoises and several blackfish; they do not come close enough. The torn sail is repaired; the studding sails are set again, for during the forenoon there is very little wind, which comes from the northeast. The sails hang slack and the ship rolls. During the night, too, we were able to sleep very little because of the rolling of the ship. For several days now, since the last stormy weather, we have observed neither jellyfish nor Portuguese men-of-war. On the other hand, today, too, the little black Procellaria do not leave us.

A noon observation is impossible today; the sun can be seen, to be sure, but the horizon is not clear.M8Latitude ⟨[----]⟩, longitude 47°7' W. Temperature of the air 14°R ⟨[63.5°F, 18.4°C]⟩, of the water 11 3/4°R ⟨[58.4°F, 14.7°C]⟩. Since yesterday we have covered a distance of about 115 miles. At noon, very warm wherever the wind does not reach, but at the same time practically calm. One notices wind on board only underneath the sails because they turn back the air. We do not see any living creature for the greater part of the morning. In the afternoon fog again rises all around. A flight of swimming birds is out of shooting range.

At three thirty there is continual thunder in the west and northwest, directly before the ship. In order that we should indeed learn all the joys of life at sea, the dark, ominous thunderstorm now comes closer and closer. On the horizon it formed a very long, dark streak of black clouds. The thunder rumbled more hollowly and not so sharply as on land; bolts of lightning struck the water. The necessary precautions were taken immediately: all studding sails and other sails without exception were taken in; the yards were set against the wind. Without sails the ship rolled very violently and unpleasantly. Then the thundershower came. There was no storm, the wind scarcely increased; on the other hand, it rained rather heavily. In their abruptness several thunderclaps resembled cannon shots; the lightning did not come very close to us. For ships, lightning is usually all the more dangerous since, instead of being equipped with lightning rods, they are usually provided with iron chains that extend the full length of the masts. The Janus, [Page 1:13] too, had such chains. After a short half hour, several sails were again hoisted. The rain, which continued to pour down, became very heavy.

About five in the afternoon, dolphins(porpoises) appeared. Therefore Gooden, the mate, immediately took hold of the harpoon, and before I had reached the prow of the ship, someone already called out that a fish had been caught. The head of the harpoon had completely passed through it; and now the heavy animal, 6 French feet in length, was gradually hoisted. It struggled violently, and the iron of the harpoon was on the point of tearing out when a rope was thrown around it below the pectoral fins, and in this way the prize was successfully brought on board. This dolphin (Delphinus delphis Linn.) is not the porpoise (Delphinus phocaena) found in the European ocean, but very different from it. (See my description in Natural History Diary, Mammal no. 1.) It was 6 lines short of 6 feet; above, dark steel gray, white underneath, and with some long gray stripes and cloudy markings along its sides (see Mr. Bodmer’s drawing). The animal bled profusely. Someone cut it above the caudal fin, and within five minutes it was dead. It rained steadily while Mr. Bodmer made a sketch of the dolphin and I measured it. Afterward the skin of the animal was removed along with the fat (blubber), which covers the entire inside of the skin to about the thickness of a finger, and under it lay the dark-red muscle meat, neat and clean. It is said to be very tasty, but the blubber is stripped away as soon as possible, since otherwise the meat takes on the taste of train oil. We examined the internal organs of the dolphin, as evening approached.

By ten o’clock the wind had already shifted and become northwesterly, hence contrary. Today we found ourselves approximately 90 to 100 miles from the great Newfoundland Bank and, indeed, in the vicinity of its southern tip. Therefore Skipper Robbins now steered almost north a few points until he turned west, and on 19 June we will probably reach the Bank, toward which we had been striving so long in vain. 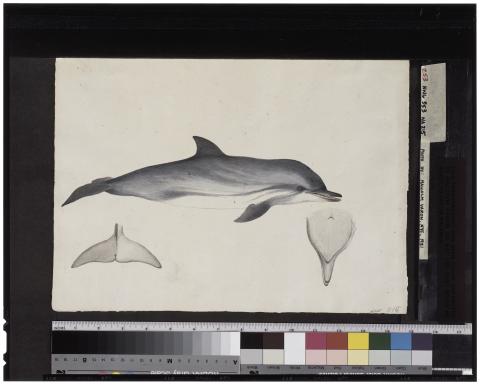