4 July: Shortly after daybreak we were assembled on deck. A clear, beautiful day began. All around, the thunder of cannon resounded, for today was the famous Day of Independence highly celebrated in the United States, on which, by chance, we reached the harbor—an interesting moment! After about an hour, the ship turned and we approached even more closely the low coast that extended scenically before us and extensively on both sides. In the center, in the direction of Boston, stood, on a small rocky island, the snow-white lighthouse (Boston Lighthouse), 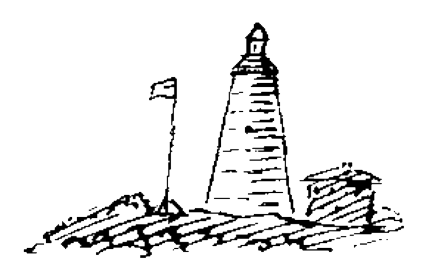 with its black roof; beside it were several small picturesque islands, some of them of white sand covered with a grass carpet at the top, and some of them rocks. Mr. Bodmer sketched a part of this view. To the right and left, the coast extended with diverse changes. In the distance there were a few high, blue mountains—for the most part low, however—here and there spotted white and green because of the grass cover, alternating with many towns in several areas where, especially to the right, in the region of Salem, the smoke from the cannon still rose. Because of the festive holiday, the firing of cannon had begun in Boston and continued along the entire coast. More and more beautifully and picturesquely, the islands and the coast emerged most pleasantly, like decorations in various shades on the dark-blue surface of the sea.

On the rear mast of the Janus one now hoisted the number of our ship (45. 53.) with four of the blue-and-white signal flags, as I mentioned above in connection with the invention of these signals, and they were arranged as the sketch at the top of ⟨[my]⟩ following page indicates. At this moment our royals were reefed; the topgallant and the remaining sails (except for studding sails) were set. These signals are immediately relayed by a telegraph located on an island in the vicinity [Page 1:23] 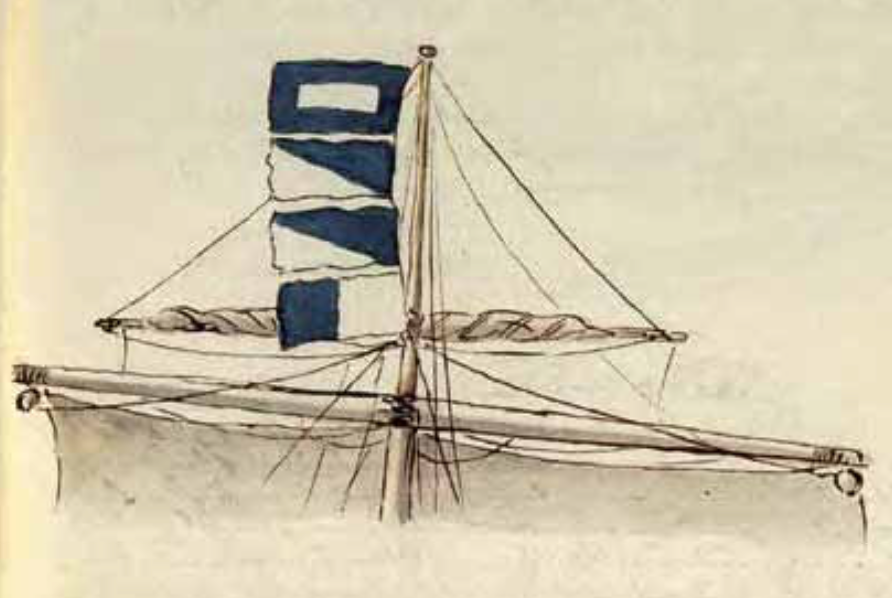 and now have already given the ship’s owner the good news that his ship has safely reached this point. All the ships that sail around us, even the fishing boats, have hoisted colorful flags (the national flag) today. Above the snow-white lighthouse, too, the American flag waves. Fishing boats and sloops with colorful stripes like ribbon grass sail past us. Crowds of people from Boston are on pleasure outings, some of them to fish. We see them pulling fish out of the water.

After seven o’clock we sail past the narrow, rocky Graves Island. The lighthouse stands before us and the flag waves in the wind. Mr. Bodmer had already drawn this island more from a distance. We sail past several oddly shaped rocky islands, and Mr. Bodmer now sketches some of them as well as the lighthouse.

A stately three-master beside us puts out to sea. We sail past small, remarkably jagged rocky islands and strange, yellowish, baldly cut-off sandy islands

. The beautiful white lighthouse is also situated on an island with a very rocky base, the flagstaff beside it. Magnificent prospects of the near and distant coast reveal themselves, in part elevations, otherwise grain fields, as in England. Here and there are also tall trees in the bays, though seldom. Cities and villages in the distance, white buildings and islands with manifoldly graduated forms, a magnificent view in the bright morning sun. The distant scenery becomes more and more interesting the farther one proceeds out between the islands lying before us. The coast opens up more and more and becomes ever more varied. The pilot does not come out because today is the great holiday; therefore, the captain himself has to steer. The view into the interior of the large Bay of Boston grows more and more beautiful: the number of islands here is very great. Many have steep, yellowish, abrupt sandy banks with attractive grass cover on top. Nice white and other buildings, telegraphs, etc. Cattle graze on some of the islands.

Suddenly the pilot appears. Now we are secure. He approaches in a small boat and boards the Janus. Ships are sailing in all directions; many others, decorated with numerous colorful flags, lie at anchor. To our right is Long Island, a long, narrow island with the telegraph; to the left, graceful buildings with flagstaff. The wind becomes very weak; we tack (ship about) in between the islands. On all sides extensive picturesque glimpses of the water between the islands. Attractive homes, trees, and, toward shore, the citadel, or fort of Boston, which projects to the right and left in the bay, in which to the right ⟨[one sees]⟩ the imposing city of Boston with its reddish brown roofs. To the left in the bay ⟨[are]⟩ villages, countless homes, very many trees and woods on the gentle slopes: a magnificent view!

Many ships, all of which today have innumerable colorful pennants and flags, sail and tack in all directions. Fishing schooners lie at anchor. Here the water has a somewhat dark, soft green color and is no longer blue. In the water along the banks grows much long, thin eelgrass, undoubtedly Zostera marina. Its torn-off stalks drift about everywhere. Numerous jellyfish drift in the water near the ship; their number is very great.

They are round, extremely translucent, very flat, wide open, surrounded underneath by a veil of filaments, and on the bell one sees a cloverleaf of four whitish circles, probably internal vessels.

The fortress at Boston now emerges in a particularly attractive manner; its snow-white walls on the gentle elevation contrast nicely with the dark-green trees rising above it. At ten o’clock the heat was very great, the wind very weak. The pilot has the ship turned frequently, and thus we came closer and closer to the city. Mr. Bodmer sketched yet a third view between several islands, facing away from Boston in a northeastern or eastern direction. M19In this view one sees Long Island with the small island, Nix’s Mate, where a certain Captain Nix had his mate hanged on the yardarm and where a monument has been erected. Several steamboats hasten in various directions toward the remote parts of the bay; they are all decorated with new national and other flags, but none of the steamboats that we saw yet were large.

In glowing heat the Janus now lay on the magnificently gleaming surface of the [Page 1:24] water, surrounded by the unique landscape. Islands of all kinds and with the oddest, strangest shapes surrounded us; several were high, steep, partially covered on top with grass; others were cultivated, with dwellings and scattered trees on them; some were steeply cut off at one end; others extended in long narrow ridges. In short, these diverse islands give the Bay of Boston its very distinctive character. Here are some of their shapes.

While we drifted forward very slowly with the wind, which was barely perceptible, several ships came past us, including a very beautiful three-master, the Louisa, which was sailing to the Antarctic on a whaling expedition. It had a large crew on board, all dressed in striped shirts in proper summer fashion, though some of them wore red woolen shirts and caps in spite of the great heat. We now sailed slowly past the fort. It is on an island and has roughly this shape.

Above its white stone walls a building can be discerned, and the flagstaff flew the flag. A swift steamboat (the General Lincoln) now sped past us. It had two engines beside each other and was therefore very broad. It had a smokestack on each side, was very high, and had a nice area forward, covered with canvas, and a large number of passengers. Several other small steamboats are seen arriving from every direction. Most of them are very elegant and sail as swiftly as an arrow. Close by, a small ship that sank yesterday with all its sails lies near us; it was loaded very heavily, and the water rushed in.

At twelve o’clock on shipboard, a temperature of 18°R ⟨[72.5°F, 22.5°C]⟩ in the shade with a slight breeze. Right before us, near the ships, a high smoke cloud rose on shore from the first houses of the city; finally, a very large flame. We learned upon our arrival in Boston that this had been a fire in a warehouse for salted mackerel; the fire had been caused accidentally by melted tar. Nearby, a large masted ship (brig) had also caught fire and was completely destroyed. We were able to verify this from what we saw during our walk that evening, when the stench of burnt fish was still quite unbearable. At about one thirty, the Janus dropped anchor at the India Wharf among many large, imposing ships from various parts of the world. 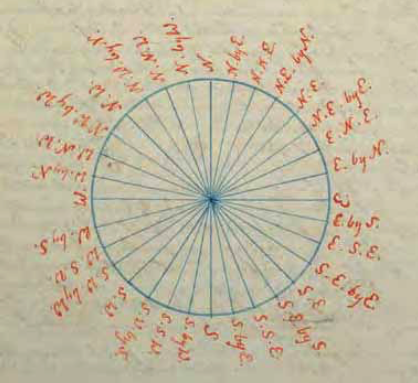 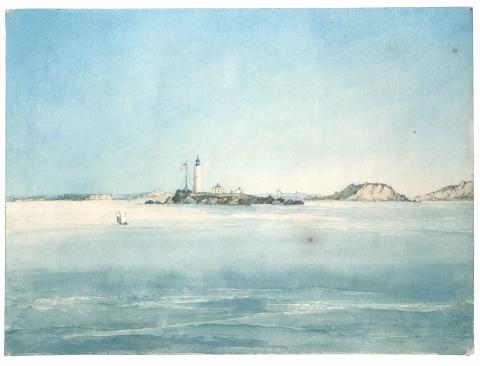 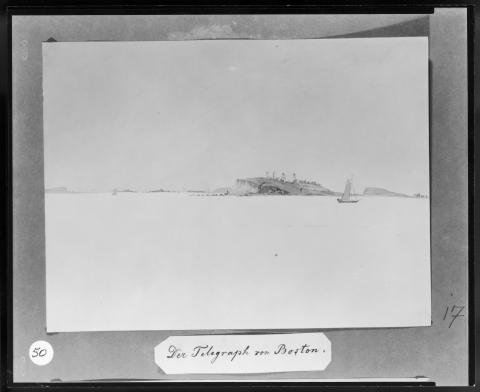