3 July: After midnight the wind suddenly shifted toward the south but soon returned to its old, contrary southwest position. We continued all night in the same direction. Tack at eight o’clock. Temperature of the air at this hour 12 3/4°R ⟨[60.7°F, 15.9°C]⟩, of the water 11°R ⟨[56.8°F, 13.8°C]⟩. It is very pleasantly warm, the horizon hazy. Consequently, we cannot discern with certainty the coast of America, which is close to us in the west, while our course is southerly. Someone climbs the mast to see better, but from here, too, land cannot be discerned with certainty. We see some floating Fucus and pieces of wood but few marine birds, just Procellaria pelagica. We believe we are already getting an entirely different kind of air from land. Our impatience is great at being so close to land and yet not being able to reach it. We are now located approximately opposite Cape Ann, which is the northernmost cape of the Bay of Massachusetts, and are sailing toward Cape Cod, the southern-most promontory of the bay.

Magnificent weather; splendid blue sea. A noon observation is made but is unnecessary today, since we have reached the coast. Ever since ten o’clock we had been looking for land, but a streak of fog concealed it. When, however, the observation of altitude was completed, we suddenly caught sight of land in the fog: Cape Cod lay to the south 15 miles from us. It revealed low white sand hills with several dark thickets on them. All morning large quantities of wood, grass, Fucus, and other plants had announced to us the proximity of the coast.

At noon, temperature of the air 13 2/3°R ⟨[62.8°F, 17.1°C]⟩, of the water 11°R ⟨[56.8°F, 13.8°C]⟩. Several fishing ships are visible in the distance. The tacks we made since yesterday are the following: at noon (on 2 July) we held to the direction west-northwest for a distance of 65 miles, until this morning (>3 July, eight o’clock); then we sailed in the direction of south-southwest for 13 miles until this noon, when we caught sight of Cape Cod. After lunch we come closer to Cape Cod. At one thirty the ship turns, and we make a tack and sail up along Cape Cod, a long, low strip of land. We can clearly distinguish the white sandy coast, alternating with low, dark-green thickets, perhaps juniper or the like; the lighthouse, a moderately high tower; beside it a tall building; and not far away a windmill and several dwellings. Shortly before two o’clock, Mr. Bodmer sketches this view.

With this most incomparable weather, the Janus hastened ever closer to its destination. A fishing schooner lay at anchor and fished. A hermaphrodite brig came past us at full sail toward the open sea. These vessels have the sails of a brig forward and on their foremast and those of a schooner on the mainmast and, hence, are [Page 1:22] something intermediate between both kinds of vessels. The small fishing schooner had put three boats to work laying or hauling in the fishing lines, for which this splendid day was especially favorable.

We now sailed still farther up toward the Bay of Boston and at five o’clock saw scarcely more than a glimmer of Cape Cod. This afternoon the heat had become very great on deck. Two butterflies had strayed there but could not be captured. In addition to the sketch of Cape Cod, Mr. Bodmer had also outlined a small view of a section of the deck of the Janus with the galley. The sailors were occupied all day today repairing the rigging and cleaning. Preparations are being made for the approaching landing. From six to seven o’clock, the evening was splendid; the heat had disappeared; all around, the dark-blue surface of the sea shone serenely, moved only by a gentle wind. Individual fishermen’s sails, brown or dazzling white, gleamed near the American coast, already veiled by the haze of the evening. Peace prevailed on this broad panorama. Only on shipboard were people still active, whereas we Europeans sent our searching gaze into the distance for new objects. At seven o’clock the temperature of the air was 14 1/5°R ⟨[64°F, 17.8°C], that of the water 11°R [56.8°F, 13.8°C]⟩. A butterfly (Papilio plexippus) came on board and was captured.

We calmly continued our set course when suddenly the wind veered to the north, whereby it became extremely favorable to us. Immediately everyone set to work to turn the ship, and all faces shone with joy over the favorable wind. For a short while the wind blew briskly but after a half hour subsided somewhat. The evening became extraordinarily pleasant. The moon shone extremely brightly and clearly; the ocean, as smooth as glass, glistened from its light. We glided past scattered fishing barks, which now lay at anchor fishing. From one of them, which we approached very closely, someone hailed us; the people were afraid we would harm them. An extraordinarily warm breath of air drifted out to us from land. We remained together on deck until after ten o’clock, when the dew fell.

Shortly before half ⟨[an hour later]⟩ the wind subsided, and it seemed as though it would grow calm. But after a half hour the wind picked up again, and we were running at 5 to 6 knots so that about eleven o’clock one could already see the lights from several lighthouses, particularly that from the Boston Lighthouse, directly before the ship. The view is said to be very beautiful when it is dark: seeing all the fires (of which there are about fourteen) lining the coast in the broad Bay of Massachusetts (this is what this bay is named). (See the attached sketch of this bay.) 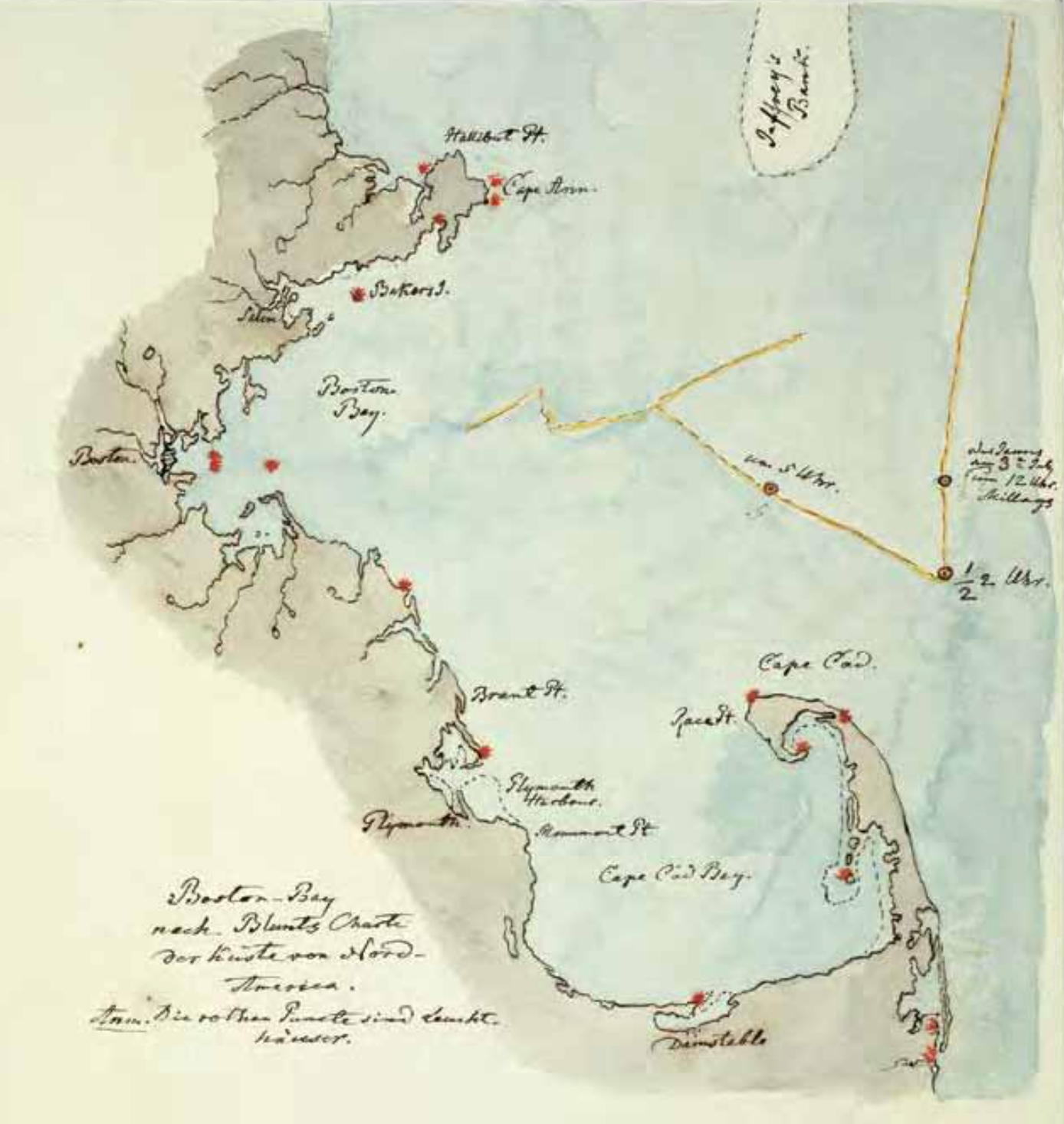 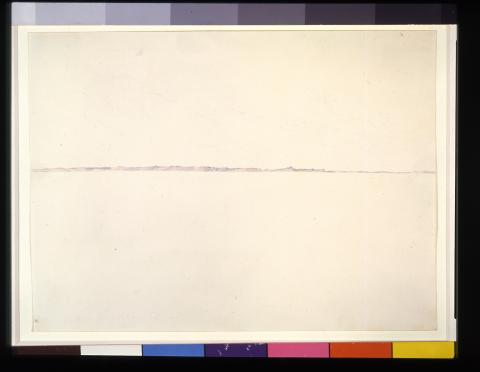 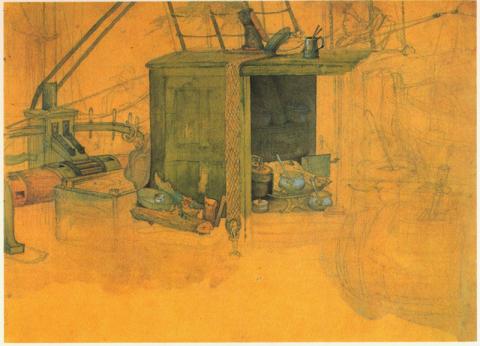