Since yesterday noon we have made the following tacks: 1. From yesterday at [Page 1.21] twelve o’clock noon to eight o’clock on the second of July, 66 miles; 2. From eight o’clock to noon on the second of July, north-northwest 13 miles (the first big tack of 66 miles was south-southwest). At four thirty we see ships on all sides. There were five in number, including several small schooners that come out here to catch mackerel and often remain at sea for three to four weeks. Ships like these often return with 800 or more barrels of salted fish. Some of it is sent into the interior of the country, some to the West Indies and other places. We fished up enormous Fucus, with the holdfasts torn from the rocks. It was F⟨[ucus]⟩ ⟨[——]⟩, which frequently grows attached to rocks on American coasts and is often found in piles along the coast. Today on deck in the bright sunshine, the men are occupied painting with oil paint and cleaning the soiled masts; other tasks occupy sailors on the masts and stays. The wind has shifted a little more to the south; this immediately allows us to steer correspondingly more to the west. 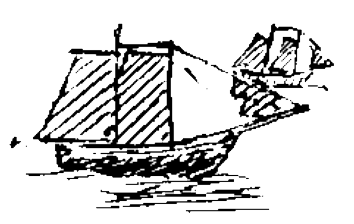 approaches to a distance of 300 paces. It has disengaged its sails from the wind and remains stationary to fish. The sight of this nice ship was very pleasing; the lower part of the hull was green; above it a black, yellow, and red stripe. Two masts were gracefully erect, light woody yellow in color with large, tall white sails. The jib had been lowered. One saw eight men who were occupied with fishing. The small ship rocked excessively on the waves, which were today insignificant. This schooner soon went under sail and disappeared from sight.

In the boat aft, where he had set out a line, Master Gooden now caught a mackerel (Scomber scomber Linn.), a very nice fish, of a kind that I had already obtained several years ago in Norderney. When it comes out of the water, its back is a very beautiful green with beautiful, distinct black perpendicular markings. As soon as the fish is dead, the green color turns into a beautiful blue; the black markings remain. In order to prepare and clean them, one cuts these fish open lengthwise on the back.

A large brig came sailing south of us in the same direction. It sails less swiftly than the Janus, not so well against the wind either. Consequently, it lagged behind, and when it was dark, we could just see it shimmering directly behind us. At seven o’clock, temperature of the air 11 1/2°R ⟨[57.9°F, 14.4°C]⟩, of the water 9°R ⟨[52.3°F, 11.3°C]⟩. Beautiful evening. A brisk but unfavorable breeze blows. The sky clear. The waxing moon already shines rather brightly. Heavy dew falls on deck; one immediately becomes damp there.