On 16 July I left the inn early. Mr. Bodmer stayed behind to wait for Dreidoppel, who was supposed to come from Providence, since the scheduled schooner at Boston had not wanted to take him. I left New York at six o’clock on a steamboat called The Swan, which was completely filled with passengers; one could hardly find a place to sit. Before long a bell was rung for fares to be paid, and all thronged forward to do so; afterward we had breakfast in the large room below. The servants consisted entirely of Negroes and mulattoes. Among the many different kinds of people gathered here on the steamship, there was also a group of German peasants with their wives and children, who, because of their shrill, vulgar manner of speaking, contrasted so markedly with the English that all eyes were fixed on them, and they were generally the object of ridicule. Several German farmers from Pennsylvania, in gray jackets made of summer material and straw hats, acted as hosts. They had probably met the new arrivals in New York.

The waterway on which the steamboat left the city is broad and affords beautiful views. We reached a place called the quarantaine; here the ships must lie at anchor for a while. From here on, the ocean inlet becomes narrower. The land on both sides is rich in variety. On the edge of the shore there are meadows, then come cultivated fields with woods in the background. Near a village we lay to for a moment alongside a steamboat, which immediately departed for New York. Here the waterway is only about one hundred paces wide. Then come extensive, level stretches of meadow; forest and towns alternate. In the distance cattle grazed, and individual farmyards lay scattered about.

Some of the haystacks stand uncovered on the meadows, which are marshy here and there, but as in Holland, they are frequently provided with a moveable roof. 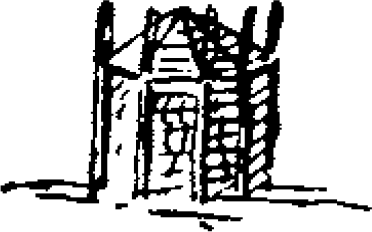 Here in the wide meadows are often small copses of somewhat rounded shape; here, too, is certainly the best opportunity for hunting snipe and waterfowl. The houses in the country are all very flimsily built of wood. The channel now widens again. The region has variety, though it is not elevated; yet beautifully green wooded hills did appear.

If, for the sake of variety, one glanced at the throng on our ship, which had become very unpleasant in this heat, then one saw even women in their big straw hats smoking clay pipes. I assume they were from Württemberg or Bavaria. Now we land again at a town where nice country homes appear. The church is on an elevation and is surrounded by tall poplars. Tall weeping willows are in luxuriant growth, and the low bushes are entwined with creeping vines of wild grape (Vitis). To the left we had for the last time a view across the bay toward the sea and Staten Island, which was the land to our left. And to the right the Raritan River now empties, which our ship follows as far as ⟨[New]⟩ Brunswick. To the left is the village of Amboy, where a railroad is being built that is to extend as far as Camden, opposite Philadelphia. The day was very hot; the land, low-lying and wooded. The bank to the right had a wide fringe of meadow, some cane. This meadow region becomes wide and extensive; there are haystacks in it. Forest provides the background. Everywhere the houses are built of boards and roofed with shingles. Wooden fences everywhere, and at ⟨[New]⟩ Brunswick the meadows and marshy or reedy enclosures are very extensive.[Page 1:39] The Raritan, however, is very narrow.

New Brunswick is a town, built in a scattered way along several long streets, which has nothing attractive about it.M9 A small town or spot. A hill with a steep bank, which seems to consist of a reddish clay, extends along the water. The passengers arriving with the steamship receive numbers as soon as they pay, and according to these numbers, they take their places in the waiting stages. At least ten to twelve such nine-seater coaches were ready for our group. The baggage was quickly strapped fast, and presently the journey proceeded swiftly. Six persons sat in our coach, nine in the remaining ones. The passengers included some bad company, and in my coach there was an unpleasant person who made much noise and left no one in peace. He frequently spat in the coach, shouted, sang, whistled, spoke in various languages; it was difficult to keep him at a distance. Here one is constantly exposed to such annoyances.

The region beyond ⟨[New]⟩ Brunswick was rather unproductive, somewhat bare, the soil a dark reddish clay, later also partly sandy. The road was often poor. Parts of the stone pavement had become full of ruts, and we received good, hard jolts since the swift horses raced hastily onward. Here there are wooden fences like those already mentioned around all the fields and the farmers’ properties. The houses are flimsily constructed of overlapping boards, the roofs of shingles. We see pastures, clover, rye, oats, and cornfields in turn, then again large areas with European fruit trees at the peak of their growth such as one finds near all the homes. Bignonia radicans was blooming and partially covered the walls with its vines. Weeping willows and Italian poplars are very common near the homes, the former often very large and spreading. Cattle, some without horns, as well as sheep and pigs were seen everywhere.

In Kingston we obtained fresh horses.M10 Kingston, with a college. While we were changing horses, the coaches all stopped beside each other. Blacks and mulattoes came and offered us milk and little cakes, which were bought in great number. The German peasants filled two whole stages and very vigorously jabbered away in their crude dialect, at which the Americans were amused not a little. From here on, the region was often somewhat sandy. We saw meadows with swamps, in some of which there were low thickets, in which a pretty wild rose with vividly pink flowers was very common. Beautiful forests appeared in some areas; the shade in them was splendid; the trees were tall and luxuriant. Oaks, sassafras, walnuts, storax, chestnuts, Platanus, and tulip trees glistened in their most luxuriant foliage. The latter are immediately distinguished by their pyramidal form and bright, beautiful green foliage. They now had all their seed pods, which, however, were not yet mature. Along the roads grew Phytolacca, thorn apple (Datura stramonium), several European plants, species of Rhus, shrubs overgrown with wild Vitis. Rhododendron and Kalmia grew in rather swampy places and also as underwood in the forest. We drove through Princeton and reached Trenton on the Delaware, which lies scattered in the thickets on the low banks of the river. This town offers a nice sight, since the broad, pleasing river was enlivened by many smaller boats as well as larger ones. One saw Negroes and mulattoes ready to serve everywhere. As generally in the United States, a large wooden covered bridge spans the river here. It has five long arches.

Bridges like these are to be seen in most cities when one comes into the interior: for example, in Philadelphia especially. They are constructed with an extensive use of beams and timber and divided lengthwise into two tunnels, or passageways, one of which is designated for traveling in one direction and the other one in the opposite direction, so that two coaches can never meet. A sign indicates the direction of each of these tunnels.

Our stages traveled rapidly from Trenton through a sandy region; on the other side of the Delaware one catches sight of Bordentown, where Louis Bonaparte, the ex-king of Spain, now Comte de Survilliers, has his country home and has been living for about fifteen years. [Page 1:40] Somewhat farther on, near a small settlement, our coaches reached the bank of the river, where the steamship Trenton was waiting to take us on board. We now sailed down the beautiful Delaware, the banks of which are low, green, and covered with country houses. One also frequently catches sight of woods, particularly rows or transparent borders of a certain variety of coniferous tree that grows in an umbrella shape. Soon a bell was rung for the payment of fares. Then there was a very good lunch, which only mulattoes or Negroes served, and at about four or five o’clock we docked near Chestnut Street in Philadelphia. A Negro brought my baggage to the United States Hotel, which is also located on Chestnut Street. Since there was no room available here because of cholera refugees from New York, I was quartered for the night with a gentleman from that city in one of the parlour⟨[s]⟩, for in inns in this country, a big distinction is made between the living room and the parlour, where no one sleeps. All sorts of refreshments are served in the entrance hall of the hotel. One has wine, spirits, and all similar beverages charged to one’s account. This is quite common here. Nearby there are barrooms. People sit around reading newspapers. People smoke cigarros, and a large number of idle gentlemen lie and sit around on the benches inside and in front of the building until the bell (here a Chinese gong) rings for breakfast at eight o’clock, for lunch at three o’clock, and in the evening for tea. Everywhere only Negroes and mulattoes do the serving, and for the most part, they also bring the luggage to the ships.

In order to buy several needed natural history books, which until now I had looked for in vain everywhere, I went to many bookstores that very afternoon, particularly to Carey and Lea, where there are many nice things, but nowhere did I find what I was looking for.