22 May: We tacked all night into the wind. In the morning, damp weather, cool, and foggy. At nine o’clock a flight of six gannets (Sula alba) appear, several of which are gray, undoubtedly young birds. At eleven o’clock the ship changes direction; at this moment we recognize the English coast in the fog, particularly Cape Start Point, which I sketched in 1815. Our degrees of latitude 50°5', longitude 3° 38 miles (60 nautical miles to a degree). At noon, little wind. The fog disperses during the afternoon. We continue tacking along the English coast. At four or five o’clock, Mr. Bodmer sketches the breach of the coast where Dodbrooke is located, at whose entrance to the west the picturesque Cape Bold Head is situated. The entire coast has a pleasant appearance, with green fields and hedged enclosures. A rather high ridge with isolated cliffs and groups of rocks, especially close to the sea; here and there we see individual dwellings, but forests and trees nowhere. At about eight o’clock the wind changes direction and becomes favorable. We sail generally in the direction of Eddystone off Plymouth. This light shines, too, as soon as twilight is beginning. The wind subsides again for the night. 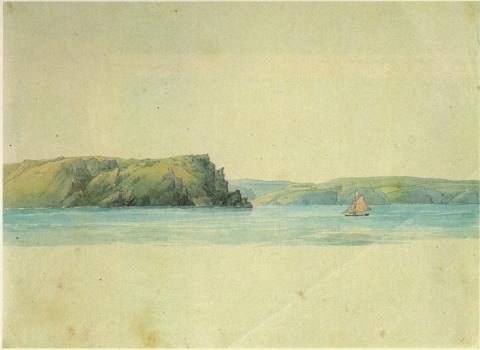