7 June: Early in the morning, beautifully bright and calm. A keelboat is being caulked on land because it leaks. Mr. Bodmer and Major Mitchell take this opportunity to go out to visit the prairie dog village and to shoot some of these animals. Other hunters go hunting. I had so many birds to describe that I could not possibly get away. At 7:30, 65 3/4°F [18.8°C]. Today one of our young bears, still very small, was put on a tree on shore, and seeing how rapidly and agilely it climbed, like a monkey, was interesting. Yesterday the crew of a keelboat caught a prairie dog alive on a big sandbar in the river; they probably go there to drink.[Page 2:109] Mr. Bodmer returned early; his companions had gone not to the prairie dogs but to the Indian women of the fort, for all these gentlemen have women or girls here whom, as they say, they marry—that is, visit them once a year or every two or three years and then leave them in the lurch, whereby they become unhappy and turn to prostitution; but this is of no great significance here. For the most part, [they have] children of these women. Water [of sufficient depth for travel] had been found and water was pumped into the boilers. At twelve o’ clock noon, 77 1/2°F [25.3°C].

We cast off after twelve o’ clock, and, indeed, the île au Village de terre remained to our left. At one o’ clock we were opposite our unloaded goods on the left bank; here we struck bottom and were often aground near a sandbar, which grew larger by the hour. Yet we succeeded in squeezing through the channel between the extensive sandbars and then moved into deep water, sailed down to our baggage, halted there, and loaded up. I went with Mr. Bodmer onto the prairie hills while it was still very hot. We climbed the smooth grassy hills and the slippery clay hills with their strange shapes, which often reveal entire craters. These hills are burnt on the outside. [The] rocks and earth show this: the former are brown and partly like slag; the latter is hard, brittle, cracked where wet, tough, clammy, blackish, [and] divided into clefts and cracks. The high domes of the hills have round parallel rings on top; their lower sections have vertical furrows. 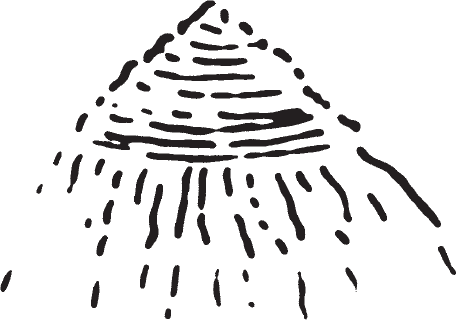 Thus these strange clay cones (once surely mud cones) stand and indicate that they have certainly been thrust up by fire, especially since they bear many craterlike hollows on their sides and valleys. Short green plants grow densely in the clefts and the small ravines, dividing them regularly, as into beds, and forming parallel strips and often networks. [The] lower section is usually overgrown with grass and plants. [There are] many domes, completely of blackish bare clay.

When we entered the first ravine, or gully, where individual old cedars, thickets of ash, roses, and several other bushes grew, we found soft earth in the bed of the small river and sank in deep; the ground was so tenacious that we could scarcely pull our boots out. Cactus opuntia grows everywhere on these hills and in the higher plains; it is not yet in blossom, but Cactus mammillaris is now blooming beautifully red. Several yuccas, as well as the often-mentioned plants, also grow on these hills. The beautiful dwarfish Amorpha [— —] covered whole stretches and slopes, and its dark, violet-brown flowers gave off a very pleasant aroma. The beautiful vermilion-colored [— —] bloomed over the entire prairie.M24On all the prairies of this region, one also sees thick bushes with woody stems, about 2 to 3 feet high, of Artemisia, with its silver-white, bitter-tasting leaves, which, however, was not yet blooming; Allium; the short Oenothera, with complete leaves; Astragalus with white flowers, which is now in bloom; and several other plants. Here [----] with its magnificent bright yellow color in a long, compact spica, etc., was also blooming, etc. When we had climbed the hills—where we did not see any birds except Muscicapa tyrannus, the big yellow-breasted Sturnella, Fringilla grammacea Say, Fringilla graminea Gm., and Hirundo fulva, which individually nest in the banks of the ravines and in the caved-in holes that occur frequently in the clay hills—we wandered through the wide, gentle hills and valleys with cactus, Amorpha, the small Convolvulus with its white blossoms, and other plants. We frequently found antelope tracks. We also found on a tall dome a path made by buffalo (bison), on which these animals move down to the river to drink. Nothing of importance presented itself to our doublebarreled guns. We had followed the direction from Fort Pierre, [and] when the sun stood low in the sky, we turned back, found the cast-off antlers with twelve points (one side only) of an elk bull (Cervus canadensis) in a deep ravine, and once more arrived on the Assiniboine. The evening was pleasant. At nightfall the wind, which, to be sure, had already been blowing on the hilltops earlier, arose. Our three hunters, who had been on the other bank, returned again but did not bring any game. Our woodcutters had cut large stacks of cedar wood this afternoon and had brought me a snake (Coluber proximus Say).