4 June: In the morning, fog, but good weather. At 7:30, 59°F [15°]. Captain Pratte left for the fort with the keelboat to fetch more cargo; the Indian who had been here yesterday accompanied him. I undertook an excursion into the countryside. High hills, some of them very steep, rise up right next to the water. The lower ones are covered with various kinds of grass: some of it withered and yellow, some of it green. The higher the hills, the more barren they usually are, consisting of a clayish earth, the surface often changed by fire. Ravines and small valleys, usually just small gullies, separate these hills; [they] are now dry. Some of their banks [are] steep with cave-ins. If the hills are bare, one still finds short brush here and there in the hollows; beautiful plants bloom everywhere. Today I found Yucca angustifolia, Cactus opuntia, Oenothera [— —] with whole leaves, Tradescantia virginica, many of the plants already mentioned, and six or seven new species, which I collected. On the bare, high clay hills, there were small parallel furrows, cut vertically and horizontally, in all of which certain small plants grew luxuriantly, since in these dry regions they seek moisture. Seen from afar, they form green, netlike lines along [the] steep elevations.

Here swallows (Hirundo fulva) streak about in individual pairs; they nest in the gullies. The finch with the white tail spots (Fringilla grammacea) inhabits the hills in pairs and sings its brief song; to shoot them is difficult because they have to be pursued over steep gullies. Besides this bird I also found a pair of kingbirds (Muscicapa tyrannus) and another small bird. I found a path trodden by elk that leads to the river. The higher hills closer to the river afford a very attractive view if one climbs their cone-shaped domes; one [can] see Fort Pierre looking very attractive over in the green prairie, as well as the hill chain behind it, on which the medial black stripe is still visible.

Very warm, I returned to the ship at 11:30, and the capitaine also returned with his keelboat. At twelve o’ clock, 72°F [22.2°C]. Messrs. Sanford and Mitchell had lunch with us. In the afternoon the keelboat arrived, and with it Mr. Mc Kenzie, the interpreter Dorion, and six or seven Dacota Indians, including the new arrivals. They first smoked their pipe after they had viewed the steamboat with amazement. Then they were given something to eat, usually just zwieback and bacon or salted meat. As a rule they do not like to eat bacon, but to [avoid] giving offense, they bolt it. A remarkable man among them, a Teton of the Brule tribe—his name was WáhMenítu (Spirit, or God, in the Water) ate for all of them, for he consumed whatthey what they did not want, and his jaws worked unceasingly. His face, with its strikingly prominent upper lip and gently bent nose, was painted red. His hair hung around his head in disarray and in a queue over his left eye; on top, tucked underneath the braid, [he wore] a feather from a bird of prey in a horizontal position. His leggins were very beautifully embroidered with quills and covered with long fringes and braids of human hair; I bought them from him.[Page 1:106] Mr. Bodmer gave him cinnabar so that he might freshly paint himself and make himself more handsome; this he did, whereupon he was sketched. Before a mirror he rubbed his whole face red and then, with a piece of wood, painted it with transverse stripes that were narrow and parallel; a thick red stripe ran across his cheeks [and] another down over the chin, and the area around his eyes was completely red.

Like all North American Indians, the Dacotas have an especially high regard for bravery, as is well known, for which reason they wear symbols of their heroic deeds all over their bodies. For outstanding deeds they wear braids of human hair first on the outside of the leggins,M17They always wore leggins but have worn the loin cloth only since the coming of the Europeans; they make it from cloth. The Arikaras still do not wear it; during they summer they even go without leggins. This nation has always been hostile toward the white people. then on one, and finally on both arms. This holds true also for the feathers on their heads. Anyone who touches a slain enemy under hostile fire sticks a feather horizontally into his hair. Wáh Menítu was entitled to wear three feathers. This [touching] is an outstanding deed, for often 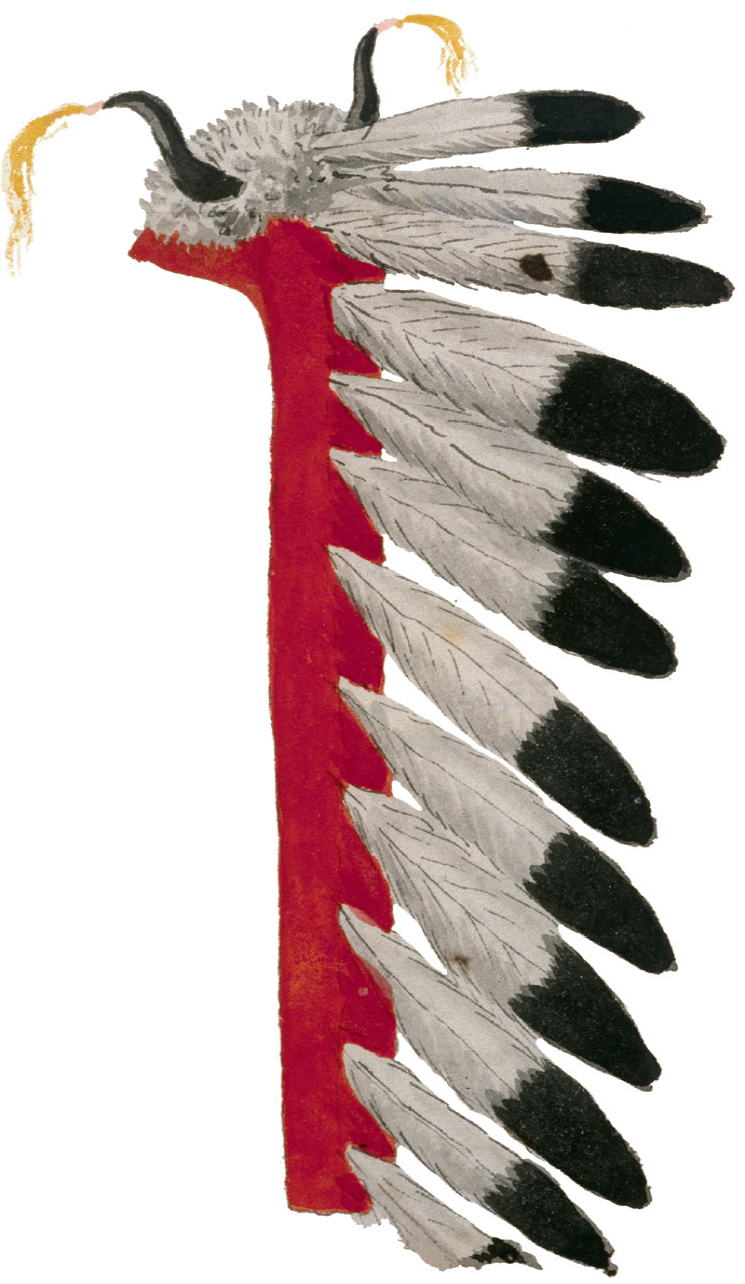 nine or ten bold men are killed before one of them touches the dead body. Whoever kills an enemy with his fist, sticks a feather into his hair in an upright position; if he kills him with a gun, then he sticks a small piece of wood that symbolizes the ramrod into his hair.

For truly outstanding bravery, they receive the big warbonnet with buffalo horns, which, at most, two men in a village wear. Its value is as high as that of a horse, and it greatly distinguishes its warrior, especially on horseback. The red cloth band hangs far down over the back. In a battle with the Pawnees, the Dacotas had killed a chief [sic] who wore such a decoration, and the enemy took it. During the next battle, the Dacotas recognized it by its red feathers. They made every effort to recapture it; [they] also wounded the wearer but could not kill him, because his horse was too swift. Such a loss is very painful for them. If the bearer of this distinction does not behave well, even [just] once, he forfeits the honor of this adornment. In the nearby group of two hundred [tipis] there is now a warbonnet like this whose owner died or perished in battle, and the feather ornament has not yet been awarded to anyone. This feather ornament is really very beautiful, and the Arikaras, Mandans, Hidatsas, Crows, and all the other northwestern nations also have them.M18The headdress I saw at Fort Pierre had been given to Mr. Laidlaw by Mato-Tope [Four Bears], a Mandan chief who later will be mentioned. The Mandans call this warbounnet mahchsi-akub-paschka.

Those who first spy out the enemy stick a short feather with a small point on the end into their hair, as mentioned on page 91 [in chapter 8]. The scalps taken are usually drawn on small [hoops] and fastened on top of the stakes of the [tipi].[Page 2:107] Whoever captures an enemy alive wears a special bracelet.

The Dacotas are sometimes wealthy when they have very good horses and can kill many buffalo. Then they have as many as thirty to forty horses [and] fine lodges. These usually consist of fourteen hides, each one of which is valued at two dollars. The Cheyennes often have as many as sixty horses. Men who are able to support them sometimes have as many as eight or nine wives. They do not cure diseases very well but are all the better at healing wounds. Often they are very successful at healing those who have been shot through the body or whose knees have been shattered by shot; I saw a hand that had been terribly injured and very beautifully healed. On their deathbed they usually determine how they are to be buried, whether placed on a scaffold or underground. This I learned today from the interpreter Dorion, who grew up among the Dacotas, has always lived among them, and has had several Dacota wives simultaneously. He also provided the following names for the five Teton tribes: 1. Sitságo (‘g’ velar). They live farthest downstream along the Missouri. 2. Oglálas. 3. Saonns. They are further subdivided into a. Meni MeniKaojuhs (means “village on the edge of water”), b. Wanoak-Ketenninas (“killed because of carelessness”), [and] c. Itáwitso. The two hundred [tipis] nearby are of this tribe. 4. Siha Sihasapa sahpas. 5. Honk-papas (‘on’ as in French).

Wáh-Menítu spent the night with us; he sang and conversed with us; unfortunately, we no longer had an interpreter. Messrs. Mc Kenzie and Sanford returned with the boat to the fort. Beautiful sunset, evening cool. 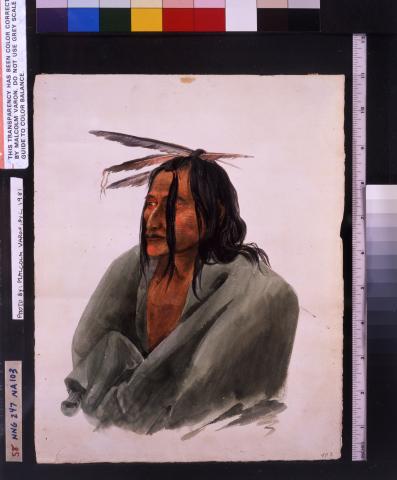