3 June: Early in the morning, very cool and windy; soon, heavy rain until after noon. There were big fires in the cabins, which later caused head colds. The Assiniboine tried to cross over early this morning, but the attempt did not succeed and it returned to its previous position on the opposite bank above Fort Pierre. At 7:30, 51°F [10.6°C]. We suffered boredom all day, because all our things had already been transferred to the Assiniboine. Near us, Indians were going back and forth; because of the wet weather, they had their buffalo hides turned with the hair outside. Since we could not depart today, the steam was vented about ten o’ clock, the hissing of which roused the curiosity of the Indians. In the afternoon the rain stopped; we went on land for a while. A wolf had been shot yesterday from on board the Assiniboine; last evening in the twilight, Dreidoppel, too, had shot at one of them with his rifle but missed.M16Noon, 60°F [15.6°C]. 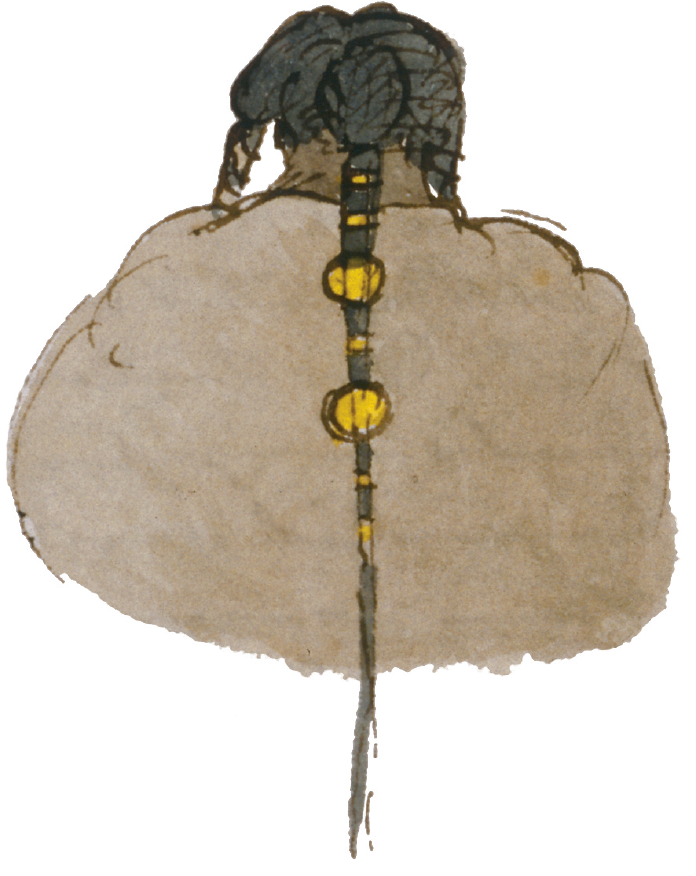 their noses longish and arched downward. They wore their hair long and mostly woven into three braids. Both side braids were tightly wrapped in narrow strips of fur; the back braid was adorned with metal disks [or] rosettes. Their sacks, belts, and knife sheaths, as well as leggins, were skillfully decorated with blue beads. One saw from their appearance that they suffer hunger less than the Dacotas at the fort, for they were more muscular and well fed. They were more than a little astonished at the horned head ornament of the Mandans and upper Sioux; they had never seen anything like it, so it seemed.

First they paid a visit to the ship, then to Mr. Laidlaw’ s, where we saw them again. They smoked and ate supper there, and they thoroughly enjoyed the food. We also ate supper at Mr. Laidlaw’ s, where we were served fresh buffalo meat, potatoes, and coffee. Later we crossed to the Assiniboine in a boat; [this was] after the Yellow Stone, with Mr. Lamont and several company employees, had taken leave of us and, [with] a few parting cannon shots, had sailed downstream. Messrs. Mc Kenzie, Sanford, and Mitchell will stay at Fort Pierre tonight; they did not yetseem yet seem able to part from their Indian beauties. The current was so strong that our rowers had to work strenuously, and then we still went a short distance on foot.[Page 2:105] Dreidoppel had been here since morning with our baggage. They had also been visited by a Dacota Indian, who, however, looked very shabby; he lived in the vicinity. The evening was cool but clear.