24 June: Early in the morning, overcast sky, light rain. At 5:30, a beautiful forest to the right, rather sparse, the ground everywhere verdantly overgrown. Above the forest the river is bordered by tall rows of hills, which have in the center wide, brickred layers with all kinds of [other] colors: gray and grayish green, fresh green, yellowish and whitish from plants and blossoms, brick-red, bluish, brownish, etc. On the opposite side, lowland with forest. The grassy surfaces along the foot of the hills [are] completely covered with Artemisia. Brick-red cones rise up before the hills. The river turns left. Forest now covers both riverbanks; in the bluffs before them, a great number of swallows. In this region Muddy River emerges

from thickets to the right (White Earth River of Lewis and Clark).M91(la Rivière bourbeuse), Mandan: Mattúhntu-Pássahä; Hidatsa: Tǘpüe-Áhji (‘ü’ and ‘e’ separate, ‘e’ half [=ə], stress on ‘ü’); Crow: Süppíh-Ánjä (‘Án’ as in French with stress, ‘jä’ as in French); Arikara: Hohrutschítt (entirely as in German, ‘r’ tongue trilled). At 7:30, 61°F [16.1°C]. Soon again, to the left, there is a beautiful row of hills, flat on top, then a low area along [the] shore with flat prairie and forest.

After half an hour, we saw smoke rising along the border of the prairie to the right and soon several Indians as well. One stood on the bank and fired three shots from his gun; nine others came running. Several had their reddish leather jackets very beautifully decorated with colorful porcupine quills: large rosettes, white, red, blue on their chests; and strips down over their arms. They all came aboard and sat down in a row. Several were very good-looking men, all with broad cheek and jowl lobes. Their hair hung plainly around their heads. [Their] legs [were] mostly naked, [and they were] wrapped in buffalo hides, [with] bow and arrows in hand, [as well as] three or four guns decorated with yellow nails and bits of red cloth.[Page 2:142] One picked up his fringed rifle sheath and wrapped it around his head, [which made] a small tuft of feathers fastened to one end stand erect. Several had black tobacco pipes.

To the left, an old channel (slew) of the river. In the distance we see before us the beautiful hill chain on which Fort Union is situated. Fair and warm about twelve o’ clock; wind on the river. At twelve o’ clock, 77°F [25°C]. Now the hill chain where the fort lies [is] closer before us. After twelve o’ clock, a hill chain to the right: level on top, rather bare, partially overgrown with short, grayish green grass. Small ravines run down it. Cottonwood forest with willows to the left along shore. To the right along the river, a 30-foot-high, steep [but] level clay bank extends for some distance. Wooded banks appear right and left. Then [come] steep bluffs, gray and barren, to the left, [and] before them a field of Artemisia [and] white-blooming Allium. In the ravines, Juniperus virginiana; underneath [that], Juniperus prostrata, like a carpet on the ground. Here entire walls of the bluffs have slid down and stand collapsed. In this region one often sees the bighorn. For long stretches the hills are almost devoid of any vegetation. There are exceedingly strange, bare clay and sandstone walls; they have lateral stripes with thin black layers; along several [walls] stand poplars up to 2/3 of their height. In many places, landslides. The river turns right. 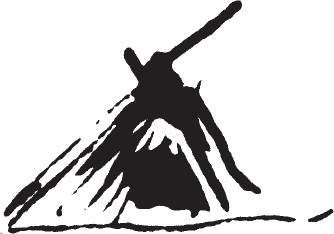 Cottonwood forest right and left. On a clearing to the right in the tall cottonwood forest, an Assiniboine hunting hut built of stakes in a conical shape. In this way we move from one hill chain to the other, [as] the river makes many bends. We now reach new bluffs. Here the small valleys are completely covered with Artemisia; this is only on the left bank. A prairie immediately joins the hills; brush and forest soon cover the bank again.

At 6:30 we reach the mouth of the Yellowstone River.M92The Dacotas call the Yellowstone Acháhka-Uatapáh (‘ch’velar), that is, Elk River, and most Indians call it by this name. The Mandans call it Míhsi-Pássahä; the Hidatsas, Wísih-Daschi (last word without stress); the Arikaras, Wáh-Hukaháhn; the Crows, Ahsdohb-Chuá (or ‘ähns’ [by itself]—heard all letters a little, ‘n’ as in French, heard ‘s’; ‘dohb’ long; ‘chua’ together and velar). The Yellowstone receives several tributaries, but the more significant are 1. The Bighorn (la Rivière à la grosse Corne, or la grosse Corne): Mandan, Ansechtä́-Pássahä (‘An’ as in French, ‘sech’ velar, ‘e’ hardly audible, ‘tä́’ stressed); Hidatsa, Ahsüchtíá-Áhji (‘Ah’ nasalized almost like ‘An,’ ‘ch’ velar, ‘tí’ stressed and separate from ‘á’); Crow, Íhsachpóh-
Atasse-Ánjä (the ‘A’ after ‘póh’ hardly audible, ‘ach’ velar); Arikara, Arikúss-Okaháhn (Arikússu is the bighorn). 2. The Little Bighorn River (la petite grosse Corne): Mandan, Ansechtä́-Chámahä-Pássahä (‘ch’ velar); Hidatsa, Áhsüchtía-Óhkarist-Áhji (as above); Crow, Íhsachpóh-Atasse-Niëkahte-Ánjä (as above, only ‘i’ separate from ‘ë,’ ‘e’ full [quality]); Arikara, Ariksúh-Kaháh-Schiripáss (entirely as in German). 3. Tongue River (rivière à la Langue): Mandan, Dä́hsik-Pássahä; Crow, Dä́hjansä (‘j’ and ‘an’ as in French); Hidatsa, Dä́hjiÁhji (‘j’ as in French); Arikara, Hatúhu-Kaháhn. 4. Powder River (rivière à la Poudre): Mandan, Waraschunt-Pássahä; Crow, Widóbsanjä (‘an’ and ‘j’ as in French); Hidatsa, Biddá-Sipá-Áhji (‘Biddá’ short, ‘Áh’ like ‘an,’ ‘ji’ as in French); Arikara, Kanáchtu-Suhukaháhn (‘ách’ velar, otherwise as in German). It is not any less wide than the Missouri. It emerges in front of white bluffs to the left and has willows and cottonwood forest above its mouth. The trees are high, beautiful, and of luxuriant growth.

The Missouri and the Yellowstone join at a blunt angle. On the far right, one suddenly turns into the Missouri. It does not have any forest on its banks at the mouth, but for 30 miles and more there are extended prairies where often herds of buffalo can be seen. Now we only notice antelope. A small fringe of willows borders the river. After the first turn of the river, there is a beautiful view—gentle elevations with diverse flat or gently rounded domes covered [in] soft green. They form the background; before them [are] lively green, high cottonwood forests and willow thickets on the river. In the illumination of the evening, the dark blue river takes many turns.

Still farther on we see Fort Union, located on the green prairie. The American flag flies brightly in the waning sunlight. Herds of horses are grazing all around the fort. A few miles [farther on], we pass a new flat island with low willows. [As] we come closer, the cannon of Fort Union thunder and ours answer; then [there is] pilot fire, to which we do not respond.

Mr. Hamilton (an Englishman who has lived here several years), some company clerks, and numerous engagés, as well as others from all nations—Americans, Englishmen, Frenchmen, Germans, Russians, Spaniards, and Italians—about one hundred of them, [were] assembled here. Most were with their Indian wives or half-breed wives and children. We dropped anchor before Fort Union 75 days after our departure from St. Louis. 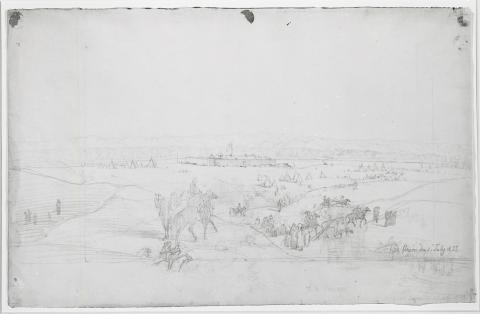 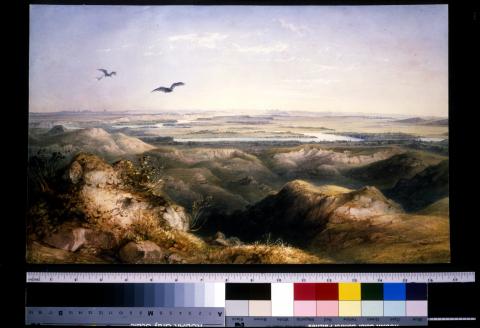