23 June: In the morning, sunshine, some wind. Harvey had set beaver traps last night and caught a young beaver, which he is trying to keep alive; the trap had crushed its forefoot. Scenic hill chains and bank gradations alternate with prairie. At 6:30, [a] vast flat region before us. The distant hill chain [is] low and extensive. Lowlands along the river, woods along shore here and there; the bank is partially bare, the river very wide and majestic. A hill chain to the right is flat on top but has sharp vertical ridges—very picturesque because of the lighting. The hill chain to the left has fortresslike quadrangular and roundish domes, flattened on top, [and] spotted with grayish green patches of small, roundish stands of brush: an altogether singular formation, peculiar to these mountains. To the right along the river, an extensive prairie as far as the hill chain. At 7:30, 65°F [18.3°C]. On the right bank, willows and individual tall old cottonwoods; to the left, a narrow border with thickets before the hills.

Both our Blackfoot Indians have now become accustomed to us. Mr. Bodmer has sketched the taller one, something he was willing to permit right away. His name is Kiäsax (l’ Ours gaucher, Bear on the Left). The smaller one is called Matsókuï (Beautiful Hair; “hair” in a general sense). The former had adopted the Gros Ventre custom of parting his hair in back in many long strands smeared with clay, which he usually twists together with a green ribbon at their midpoint into a thick queue. He wears a Spanish blanket with black, white, and blue stripes and a brass cross around his neck, proof of contact with that nation. His jacket is of white bighorn leather with very long white fringes on the arms. They call this animal Ámach Ámachkíkinägs,M88Ovis ammon. and its range begins in the region about where we now are. The other Indian was also supposed to be drawn, but he scarcely sat at all; twice he jumped up and ran away. When the interpreter Berger asked him why, he declared that he did not wish to be sketched, for he knew that then he would surely soon have to die.

To the left there are now steep bare clay bluffs with sharp edges on their gorges. Here on several of the slopes, everything was covered with Juniperus prostrata and buffalo berries (undoubtedly Elaeagnus argentea Nuttall). The river turns right. Wind now strong. To the right an antelope was running on the prairie. We reach the hills again, strange shapes, a narrow tract of forest before them. The hills begin to have bright vermilion clay. Before them and in the gullies there are grassy areas almost completely covered with Artemisia. A small creek. Once more, most remarkable clay hills; they are [so] high, one can call them mountains. On them there are horizontal, protruding ridges of argillite or sandstone, which probably offered more resistance to the water than the bare clay and thus have been more spared. The river [is] very broad; the view [is] far into the distance.

At eleven o’ clock we put in at the left bank near a forest, where we saw two deer (Cervus virginianus) and cut wood. Kiäsax, who had gone ashore, returned and laid some plants down before me, since he had seen that I was drying all kinds of plants. At eleven o’ clock we stop at the left bank near a forest and cut wood.[Page 2:140] On the opposite bank, six Assiniboines appeared on the shore; some of [them] sat down on the ground. Mr. Mc Kenzie sent them the dinghy. At [noon], 73°F [22.8°C]. The dinghy soon returned, and the Indians came aboard; there were eight of them.

The chief, a strong, rather tall man, is well known, and all who had been at the Yellowstone knew him. His name is Stassangä.M89From the tribe of the Gens des Filles, in French, Le Brecheux. (The ‘St’ of the Indian name is pronounced with the tip of the tongue.) He wore his hair bound together in back in a short, thick queue; in front, around his face and above his nose, it was cut off bluntly.M90Over his head down toward his ears, he had a narrow band of whitish hide. In his ears he had two perforations and blue and white glass bead strings in them; around his neck, a neckband of fur with the claws of the grizzly bear. A red wool shirt covered his upper body. His legs were uncovered, but he had with him beautiful leather leggins decorated with colorful glass beads, which he later put on after his comrades had left. A buffalo hide covered him; in his hand he carried his gun and an eagle fan for fanning himself. Like him, the next, rather grave man also had an eagle fan in his hand and was painted all around the eyes with whitish clay. The remaining Indians were neither handsomely built nor well dressed but dirty: their disheveled hair hung around theirheads their heads like broom twigs twisted out of shape; their legs were mostly uncovered. Only a few of them had leggins with long fringes. One of them, who resembled a Jew, wore a peak-shaped cap of whitish hide; several of them wore three braids, two on the sides and one in back. The older men carried their bows in hide sheaths to which the quivers were fastened. Several had two parallel, blackish tattooed stripes that came down the sides of the neck and extended beneath the chest. All of them had bare trunks and were covered with buffalo hides. Most of them had guns, but all of them had bows and arrows. They spoke a dialect of the Dacota language; therefore, Ortubise, who could translate their words, interpreted. Detailed information about the Assiniboines will be provided later.

These Indians smoked the pipe that was on the ship, [since] they did not have any with them. Later they were generously fed, something that seemed to please them, for they said that since spring, when they had entered this region, they had often gone hungry because buffalo had been very rare here. They soon wanted to leave this place. The chief wished to travel to the fort with us, and this was granted him; the other Indians had to return. The ship was shown to them, and the steam engine seemed greatly to astonish them; yet Indians do not much reveal feelings of this kind.

After lunch the journey was continued. To the right we soon had a beautiful, level prairie in which the big curlews (Numenius [— —]) lived in pairs. Their whistle is well known. Most singular are long, highly remarkable, whitish gray ridges, horizontally stratified, with bushes in the gorges and red patches. A troop of wild geese on the bank; they have now lost their pinions and cannot fly. The domes of the hills here are most unusual: long whitish walls, yellowish and gray, with regular horizontal stripes [and] also red patches. Underneath, at their base, [are] entire fields of Artemisia, which now have a whitish green color and stand out attractively in the landscape. The river turns right. Beautiful cottonwood forest on the sandy ground. On the bank [are] a new, beautiful vermilion flower and rosebushes completely covered with flowers.Buffalo berry [is] very abundant and in large quantity in the form of underwood. At the end of the forest, we stopped for a moment and put the Assiniboines ashore; they left in a row, one behind the other. The forest again joins the hills, which here are heavily intermingled with a vivid brick-red clay; several domes, in particular, are of this color on top. At the foot of the hills again, whole areas with Artemisia; the catbird in the low bushes along the bank.[Page 2:141] To the left, lowland with woods and sand before it; wild geese flee across this sand.

The river turns left. As we turned around the promontory, the current dashed us against the bank in such a way that the lower gallery scraped against it and 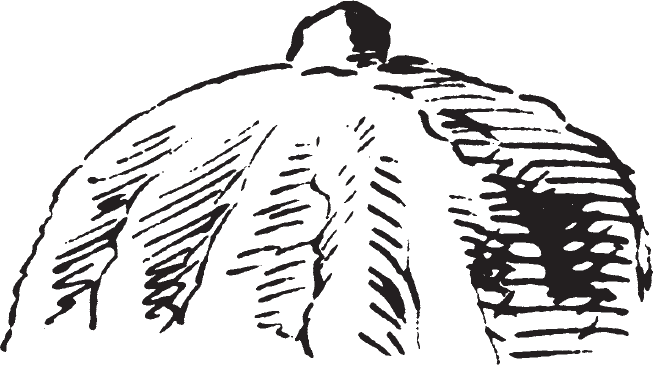 was filled with earth. Now a stretch of the river with woods on both banks; then along the left bank, gray bluffs on whose upper sections partly reddish brown Juniperus prostrata and several small bushes grow. At the next turn, where we [once more] reach imposing hills, there are again quite strange domes. Beautiful, wild, scenic valleys and ravines or gorges with rock walls, shrubs, and individual clusters of trees, the grassy areas full of Artemisia, which looks like dry hay lying on a meadow. The hills are naked heaps of earth, as though tossed up by moles, eroded by water, edged or rounded, with clefts or furrows running vertically downward. Bend of the river to the left; here we steam close along the wooded bank. A wild goose (Anser canadensis), which could not fly, was caught under our left wheel and killed. Juniperus prostrata on the dry, rough clay hills. On a high, steep bluff above a ravine, three bighorn (Ovis ammon Linn.), the first of these animals we saw: a ram and two ewes. They looked at us and then went slowly over the hill. These animals are not numerous here; farther upstream there are many. Here the river turns right.

At seven o’ clock we halt at a beautiful, tall cottonwood forest where wood had been cut, which we loaded. The river turns left and has green, wooded banks; behind [the banks] are very characteristic elevations with isolated domes and cones. Swarms of wild geese on the bank, old and young, which cannot fly. At dusk we put in on the right bank near a beautiful forest and cut wood. A deer swam across the Missouri before our eyes. 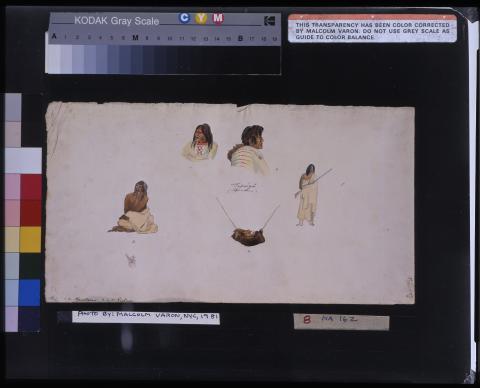