21 June: Early in the morning, rain; afterward, better. Fabulous clay hills to the left: conic peaks in the adjoining valleys, and domes and peaks of all kinds before the hill ranges. To the left issues a beautiful creek on which is a duck. On the grassy areas before the hills, Artemisia in abundance. The river has risen enormously today; trunks, wood, chips, [and] branches drift everywhere and cover it. To the right, a border of forest; to the left, the peculiar hills. Small bushes in the ravines. All these hills have a sad appearance; they look yellow and are nearly devoid of vegetation; only the bushes are vividly green. Drifting wood gives us jolts; during the night we had received stronger ones. In the forest, deep paths along shore where the wildlife, particularly buffalo, go to the river. To the left, before the unusual earth hills, yellow prairie with individual thickets and a forest border along the bank. Before us, a rather flat, green, overgrown spot where the Little Missouri empties, 1,670 miles from the mouth of the Missouri. Beyond it we see before us the blue hill chain with strange peaks, ridges, and sections.M83The Hidatsas call this river Amáh-Tikasche (everything together, ‘máh’ nasal, ‘e’ half [=ə], ‘sche’ short); the Mandans, Máhtack-Schuckä́; the Arikaras, Ohkaháh-Tschiripáss; the Crows, Ánskenn-Ischtä́ (‘Án’ long, ‘s’ [in ‘sk’], pronounced, ‘Áns’ with stress). To the right, cottonwood and willow forest. On the hills to the left, the paths of the buffalo, trodden down on a slant.

We arrived opposite the mouth of the Little Missouri; it opens from a low, flat, broad valley with green bushes at the outlet; here we saw a wolf trotting in the prairie. Behind the river, the beautiful blue mountain chain with hills like old fortresses and ridges, a most interesting region. The Missouri descends here almostdirectly almost directly from the northwest. At 7:30, 58°F [14.4°C]. Farther away, to the right, three gradations of timber: wide lowland with willows, tall cottonwood forest, and the chain of curious prairie hills with domes like a hayrick, with a dull, grayish green color in front of them. Before us, an extensive, low distant horizon. We steam to the left along the beautiful, fresh forest; then, to the right, [is] the low, naked region, which sharply contrasts with the previous hill range. To the right, an island. To the left in the forest, the roses (Rosa [— —]) bloom in abundance. About an hour later, a small river to the right. Here on this side, we are already in Assiniboine Indian territory.

Somewhat ahead [and] to the left, about eleven o’ clock, [there are] bare, gentle ridges covered with dry, grayish yellow grass, monotonous, sterile, and contrasting with the earlier varied regions. At noon, rather warm but much wind. To the right the hills are now unusual again: flat on top, bare, gray-brownish, [and] with projecting buttresses, they resemble fortifications. Before them, cottonwood forest and willow thickets along the river. To the left the grass is dry everywhere on the prairie; only the woody, 2 to 3-foot-high bushes are vividly green and divided into smaller and larger clumps. To the right the hills soon assume this shape:

A large heron or crane on a sandbar. 121 To the right the forest along the bank comes to an end. Completely bare, pale, brownish gray ramparts make up the right bank; [there are] small vertical ravines and clefts [in] them, as well as two whitish, broad transverse streaks (layers) along their entire length. Wild Onion Creek empties to the right.

At twelve o’ clock, 62°F [16.7°C]. A big bend of the river to the left; here it is exceptionally wide, a long stretch full of sandbars; therefore, we had to make the widest possible arc along the right bank. Bodmer sketches the Piegan (Blackfoot) Indian.M84Kiäsax, who later returned to the Hidatsas from Fort Union.After twelve o’ clock we halted at a prairie on the right bank that was intermingled with thickets of bushes and rather slender, short trees. We stopped about 3 miles by water below Goose Egg Lake. A beautiful Linum bloomed hereamong here among the prairie bushes. Galium [— —] with white flowers and [— —] with yellow blossoms [were] lying down on all the sandy banks of the river. Soon a very beautiful, completely level, fresh green prairie followed to the right on which there were numerous snow-white bleached buffalo bones.[Page 2:137] Above the prairie there is tall timber; here Goose Egg Lake, which is located quite close by, empties into the Missouri through a channel. Last year, when the steamboat went upstream, it met a large number of Assiniboines here. A big white wolf was now running 500 paces away, always quietly, beside the ship.

Here the hill chain has receded in a wide semicircle around the beautiful prairie; before it is Goose Egg Lake, opposite the mouth of which an island (which remains to our right), lies in the Missouri. To the left, opposite the island, there is a tall, slender cottonwood forest with undergrowth of willows and other bushes. Here the river makes a big bend, which some Frenchmen, like the one at Fort Lookout, call le grand détour. The forest to the left joined a prairie; here stood an old lodge of an Indian war party. Buffalo paths—three, four, and five beside each other—lead over the hills down to the river. An hour later the hills are again very unusual. On the lower section of their slope are very many roundish, kettlelike hollows, all of which are filled with bushes, probably because more moisture stays here a longer time. Because everything around here is bare, this gives the hills a yellowish gray and green mottled appearance. Soon the strange clay hills appear once again, as they did yesterday. 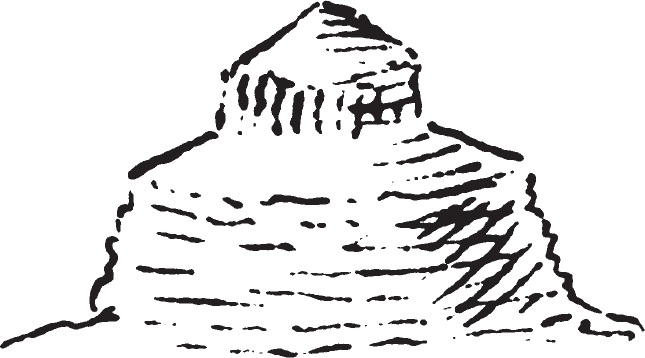 About three o’ clock we put in at a forest of the left bank and cut wood. The forest was clear underneath and overgrown with thick shrubs. Mr. Sanford, Ortubise, and Dreidoppel went hunting; the latter soon returned. The others had seen two elk, and meanwhile, we had seen another one from the ship. Now [there were] bluffs on which the low-lying juniper (Juniperus prostrata) grows. Fabulous hills on the elevations. To the right along the bank, a beautiful unbroken, level cottonwood forest with splendid grass below, excellent nourishment for the wildlife; there are elk and deer in large number. We saw three deer. Here it is easy to stalk game. In the evening we loaded wood. A 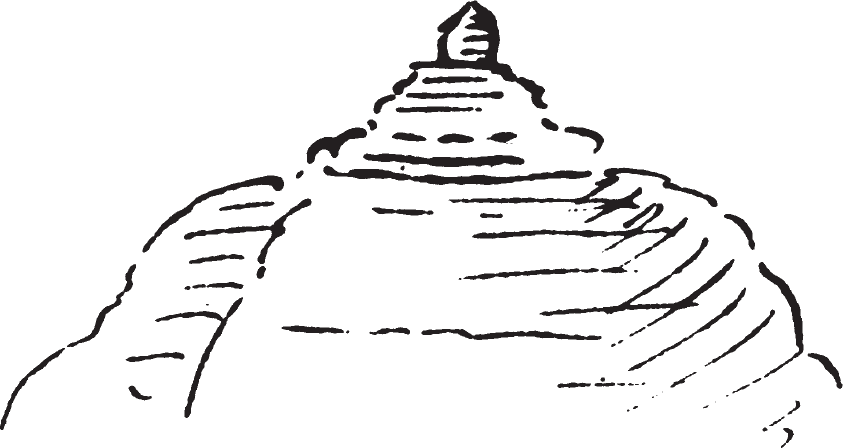 beautiful evening and sunset: magnificent view upriver, beautiful mountain domes pictured against the sky. In the twilight, wild geese with their goslings along the bank, more than twenty-four of them. 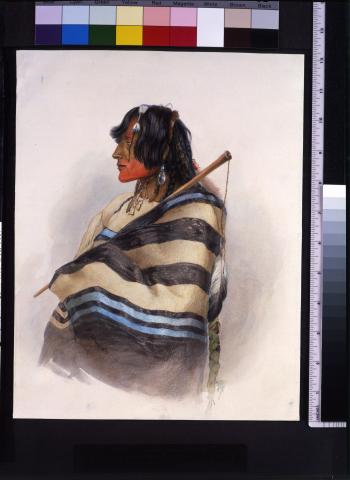