15 June: In the morning, beautiful, calm, warm weather. At 5:30, to the right, tableshaped bluffs of gray clay, level on top, and absolutely horizontal; they extend rather far. The river has risen 9 inches since noon yesterday. This morning we saw several wolves, which the ship’s crew called “Indian dogs.” The evening before, we had seen a few elk coming to the river to drink. To the right, some very unusual domes above the prairie; along the bank, smooth, moderately high bluffs. To the left, lowlands with woods on the bank.

The river now turns in a westerly direction toward a beautiful, interesting hill range that is rather tablelike on top [with] numerous vertical clefts, ridges, and 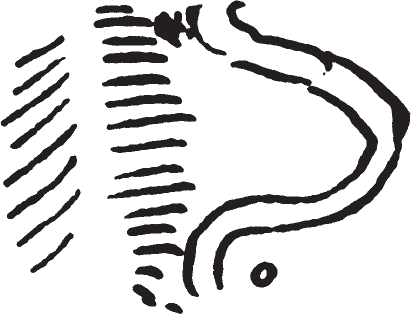 edges; they are called “the hills near the old Mandan village. ”A drowned buffalo calf floats past. The old Mandan village is located around the next bend of the river to the right and left, close to the foot of the hills. To the left, near the bank at the end of the woods, scattered tall timber on which numerous swallows perch and [then] fly around above it. Here the prairie is overgrown with bushes 1 1/2 to 2 feet high. The river washes down much wood and foam. Somewhat farther on, before the hill chain, there were large sandbars. We suddenly turned around and looked for the channel; the lead was tossed out. To the left near the bank, 20 feet high [and] level on top; navigation slows here. The river turns eastward. To the left a large, flat, low-lying area, verdantly overgrown with willows, appears. At eight o’ clock, 65°F [18.3°C]. To the right, opposite the green promontory, tall, slender cottonwood forest with open, sandy spots. Very much driftwood on the bank. Above the forest on this side, several distinctive domes, including a completely conical one; farther away the prairie hills extend, totally flattened. The river now turns to the left again.

After nine o’ clock we put in at the green wooded bank to the left to make a few necessary repairs on the ship. Our hunters take advantage of this stop to go out a few miles. We anchored for a while near the willow lowlands, which I went into and which soon turned into a continuous young thicket so full of withered trunks and branches that we exposed all our articles of clothing to the greatest danger; in addition, the burrs of Xanthium strumarium continually clung to our clothing. In this cottonwood and willow thicket we tracked elk (Cervus canadensis) everywhere, particularly cows with their calves; the former often make deeper tracks than cattle and have a much longer stride than our European stag. The calf has the same color as our deer fawn, except that [it] is generally a darker reddish brown, particularly on the head, [and] the scut is shorter. In the crowns of the cottonwoods, the fox-colored thrush (Turdus rufus Linn.) with a beautifully bright yellow iris, a genuine mimic, often sang. It is a shy bird and difficult to shoot in these thickets, because at the slightest approach of noise, it immediately flies into the thicket and hides. There were several small birds I could not recognize. Not many plants could sprout in this willow thicket; short shrubs of an Amorpha and the red willow (Cornus sericea) and a kind of vetch occurred in it. Mr. Bodmer and the interpreter Ortubise had left with the hunters; they intended to return to the ship farther upstream. The conical prairie hill I spoke of above was now almost opposite us. Work on the repairs continued.

About eleven o’ clock we moved on. The right bank now becomes barer; there are prairie hills, low and without any distinctive features; the river, however, soon turns left toward the beautiful hill chain before which the old Mandan village was located. The river had risen so much that the willows on the right bank were standing under water. This is caused by melting snow in the Rocky Mountains, and in the month of June one always counts on two high-water stages of the Missouri. The current is now very powerful; we push forward only slowly. Our gaze backward falls upon the beautiful isolated domes that rise above the prairie. In the bend to the right beside us, we have completely level, table-shaped hills on the prairie before which, on both sides of the river, are green lowlands with cottonwoods and willows. A brisk, though not unpleasant, wind is now blowing.[Page 2:122] Before us, a troop of white wild geese or swans.

At 12:30 we approach the hill range. Pretty bushes now to the left on the prairie; behind them the hill chain, rather uniform on top, is very picturesque with several distinctive domes. Along the bank of the river, layers of clay and sand alternate. On the hills one sees streaks running down, all of them animal trails. Before the hills on a promontory, we have ahead of us on a steep bank a beautiful meadowplateau where a Mandan village, which did not yet exist at the time of Lewis and Clark, once stood. Many poles are still standing not far from the river. This was a very fine site: the hill chain held off the west winds; to the north it was open. Dry, yellow grass now covers the place where the Indians lived. The long promontory behind this plateau is covered with forest. Many swallows nest in the bank above the village.

We are now in the true territory of the Mandans. The river raged at a sandy point on a bend of the river, caving in the banks and ⟨[toppling]⟩ willows. Previously [we saw] a level prairie covered with yellow grass to the right before the hills; farther on, sterile sand, still fresh. We navigate along the right bank; the current is so strong that one [can] push forward [only] slowly. The river bends back to the left. To the right [are] beautiful meadows with tall cottonwoods, [while] below them [there is] luxurious tall grass; farther on, dense lowlands with young willows. To the left, lowland with tall cottonwood forest; here we saw four of our hunters sitting.

Interpreter Ortubise had killed a two-year-old buck (Cervus virginianus) and wounded a bull elk. The two-year-old buck was discolored, almost entirely red, and its antlers were in velvet. At this moment there were two pairs of wild geese (Anser canadensis) with their big goslings close to us, and they did not fly up even [when] they were shot at. Somewhat farther [on], two other hunters, Mr. Bodmer and Harvey, joined us; the latter had killed a buck of the species black-tailed deer (Cervus macrotis Say); they brought the venison and the hides with the heads with them. Mr. Bodmer had seen prairie hens, and others had caught a young one. 79 There had been four deer together. Mr. Bodmer had caught two fine specimens of Coluber proximus, including a very nice, orangey-red speckled variety, which I described in the zoological notebook and put in whiskey.M48Mr. Bodmer had also seen a wolf.

We [presently] reached the beautiful hill chain. An isolated peak that bears the

name Bald Eagle Head stands before the other hills. Beautiful illumination of the hill chain with its diverse shapes. We saw a troop of swans; I thought they were Anser hyperboreus. To the right in the low-lying woods, [we saw] ruins of a trading trad - ing house. On the right bank, we saw several beaver paths leading down to the water [and] made smooth by sliding, [also] several gnawed-off cottonwood trunks.

After four o’ clock we put in at the right bank at a narrow strip of woods not far from Apple Creek, which remained above us, and loaded wood. Several plants in the white sand of the woods along the bank—only a few of [them] were interesting. Half an hour later we continue on. Behind the narrow strip of woods, the hills begin immediately. To the left, on land along the river, the range of hills extends and has most singular shapes and illumination. The sun sets: a beautiful region [lies] before us, [with] a broad view, green banks everywhere, [and] beyond them the singular hills. Evening very pleasant; quite early, the Caprimulgus were already flying about high in the sky above the river. Shortly before dusk a dead bison floated past, and in the willows along shore, we saw a big beaver running, which plunged into the water after someone shot at it and missed. It was rather slow. We halted off the left bank a short distance before the Heart River;M49Halt in the evening three miles below the Heart River. [we] will reach this river early tomorrow morning. During the night, thunderstorm.