12 June: In the morning, bright sunshine [and a] strong, cool wind. To the left we had gray bluffs with a level, tablelike surface; to the right, intermittent lowlands with woods. Rather flat region to the right: barren prairie along the bank; the hills are not so high [and] lack outstanding domes. After an hour, an island to the left with cottonwood and willow. To the right, opposite us, an old doe that had its fawn here trotted proudly out of a narrow strip of bushes; it remained standing proudly on the elevation. Sandbars in the river; we steer [past them] over to the left. On this side the slopes are low [and] not very steep, mostly overgrown with buffalo berry, Artemisia, and several other shrubs. To the right, a vast prairie with a narrow border of forest. To the left one again saw a female elk on the hill. Urubus in the air.

We are now approaching the Grande Rivière. The cannons and muskets are loaded, because we are approaching the principal residence of the hostile Arikaras. Several flowers form white patches on the hills; Falco sparverius soars in the air. To the right, a sandbar and a willow-island. When we had passed the island, we reached the Grand River (Grande Rivière [or] Wetarkoo River on the map.)M31The Mandans call this river Wáraschunt-Pássahä; the
Arikaras and Mandans Hidatsas, Birridsipa-Áhji (‘Birridsi’
short, ‘ji’ soft as in French); the Arikaras, Sáchkau-Waháhn
(‘ach’ velar, ‘an’ barely audible); the Crows, Widobsánjä (‘an’ and 'ji' as in French). Along the bank, dense thickets and woods. At the mouth of the Wetarkoo is level ground with willows and cottonwoods; a white tern (Sterna) soared above the mouth. Here we ran aground, [then] steered more toward the other bank. There are gray argillite bluffs here of negligible height.

Half an hour later, a small river to the left emerges from a pretty, narrow hill chain called le Rampart; it bears the name rivière du Rampart (Ma Mapa, according to Lewis and Clark’s map.)M32In Mandan, Manáhmeni-Pássahä (River of Three Hills, Rivière aux Trois-Buttes); in Hidatsa, Ánji-Widáss (‘Án’ as in French, with stress); in Arikara, Laráh-Páhwi;
in Crow, Amenahmi-Ánjä (‘e’ half [=ə], ‘an’ and ‘j’ as in French). Not very far away to the left, beautiful blue hills arise with several singular domes; they are part of the more distant domes of the Rampart Hills. At a short distance above Rampart Creek, a green island. Lewis and Clark refer to an Arikara village here, which, however, could only have existed during winter, when these Indians move into the brush at various places to protect themselves from the cold. Brackenridge, too, is said to discuss it. The Arikaras call the island [in] Rampart [Creek] Auahk (‘A’ and ‘u’ separate; Auahk, “island”); they have no other name for it. Before the small, now-dry [— —] creek, which empties at the left bank, we make fast at the thickets at noon and cut wood.

At twelve o’ clock, [— —] °F. There is a narrow forest on the bank of ash, elm, box elder, cottonwood, [and] willow with Rhus, Vitis, Hedera quinquefolia, and other shrubs before the prairie, in which several high hills afford a beautiful view of the bend the river makes to the right, where the Arikara villages are located. Before the hills in a green, shallow hollow stood six to eight hunting lodges of the Indians, [made] from poles bound together; frequented Indian footpaths extend along the Missouri. A snake, probably Coluber fl aviventris Say, escaped from us in the brush. Only the finch with the striped head (Fringilla grammacea) was to be seen here. One and one-half hours later, after lunch, we moved farther along the left bank. Behind the bank thickets rose the gray-green hills that were becoming progressively leveled off. Also, to the right, was low-lying land with cottonwoods and willows. To the left the forest soon came to an end.

Several miles from the wooded area in the flat, gradually sloping prairie, on steep banks about 30 to 40 feet high, one sees the two Arikara villages of about three hundred earth lodges abandoned less than a year ago; we reached [these] from the bend in the river after about a quarter of an hour or twenty minutes. Behind them the prairie rises gently. Separated by a small run, both villages lie there in the green prairie like an ash-gray heap of huts, [each] somewhat rounded on top (see Brackenridge’ s description).[Page 2:117] They are built

in an irregular manner, surrounded by a fence of thin white sticks or poles. The lodges have a door in front; they are first built from a wooden frame and covered with straw on which earth is placed. Behind and beside the villages, one sees a yellow area where corn was grown. The Arikaras left these villages not quite as long as a year ago because the corn harvest failed and there were no buffalo in the vicinity. Now they move about the prairie in hide [tipis]. When they moved away, their principal chief was Starapat (Hand Full of Blood). Behind the villages, on the prairie’s highest elevation, a hill with two domes appears in the distance. The villages themselves

lie near the bank; before them, sand-bars, which forced us to sail along the opposite side. Since the inhabitants left, other Indians, especially the Dacotas, have demolished some of the lodges, yet many provisions en cache are said to be hidden here. Such provisions remain unspoiled for several years.M33Hóhka-Wirátt or Achtárahä for the southern and Nahokáhta for the northern village. The word “village” in their
language is etúhn. During the summer these lodges are very cool. Three or four and more families live in one of them, but during the winter they are too cold.

The Sáhnisch, as they call themselves—or Arikaras, as the Mandans call them, or (as misinterpreted by the whites) the Rikaras or Rees (les Ris of the French)—are a tribe of the Pawnees, from whom they separated a long time ago.M34In their language, sanihsch means “men.” Sáhnisch, on the other hand (with the last syllable short), is the name
these Indians give themselves. They now number about 4,000 persons and about 500 warriors. Some of them have four or more wives. Brackenridge, who visited them, provides exact information about them.

In outward appearance they do not differ much from the Dacotas, have long hair, and wear buffalo hides and leggins. They have good, often tall, figures [and] are well built.M35The men often have coarse features, but the women
are reputed to be the most beautiful along the entire Missouri and are often rather light in color. Away from home they are very dangerous to white people, and now everyone is very cautious of them. But in their homes, they are said to be hospitable. Theinterpreter Lachapelle spent seven years among them. There are many good men among them. The young men kill whites; they do not obey their elders.M36Earlier, at the time of Lewis and Clark, they were always friends of the whites, but the latter started the conflict, and
since then they have been resolute enemies.

They plant corn and hunt as well, but because they had no harvest the last year, they moved away. They have horses and dogs but rarely eat the latter, since [these] are not big. They hunt buffalo, elk, and antelope.M37They collect stocks of wild fruits and roots, including the very sweet poire and cherries, which they dry, as well as the pomme
blanche and artichokes (probably a Helianthus), etc. They grind the
corn, wrap the cakes in leaves, and bake them. They often have meat,
too, and preserve it dried, as well as the delicious buffalo tongues.
They plant beans, pumpkins, and watermelons. Like the Dacotas they have guns, bows, and arrows. They wear the same leather clothing as the other Indian tribes. Their women are said often to be very pretty and of a light color. The men very often go about naked and are said not to wear covering for certain parts of the body.

Formerly they were frequently visited, but after they had killed white people several times, people lost all sympathy with them, and they have a very bad reputation. Just last spring they killed three whites. In most of their customs they [are] identical with the Pawnees. Their dances, celebrations, [and] games are those of most of the other tribes. They are enemies of the Dacotas, who are very dangerous for them because [the Dacotas] are far superior in number. Formerly the Arikaras also lived on the other side of the Missouri;M38Which they call Swarúchti (‘ch’ velar) (that is, “medicine
water”) or Hokaháh-Ninn. the Dacotas, however, have driven them to the opposite side, where they now roam about in the prairies. It is said that they do not want to move back to their abandoned villages again but instead [to] build a new one in the vicinity.

The wife of the interpreter Lachapelle was an Arikara. She had a big, fat, round face with rather small features and a rather light, yellowish complexion, which corresponds to that of many Botocudos.M39In the winter of 1833 and 1834, she was for a time the wife of old Charbonneau at Fort Clark. We saw another Arikara woman at Fort Pierre and, later, two men.

The language of the Arikaras is that of the Pawnees, with a few minor deviations. Here I list twenty words that are included in the diary in the languages of all nations.[Page 2:118]

See [manuscript] page 310 for a corrected list of these words according to the pronunciation of an Arikara.

Most of the words can be easily pronounced and written by Germans. They are often drawn out and pronounced with a singing intonation.M40Regarding the Arikaras, I must finally note that, although
they are very dangerous for whites on the prairies, in their huts
they show them more hospitality than all other Indians. They make
every effort to treat strangers well, but when the [visitors] leave, the
[Arikaras] perhaps lie in wait for them and kill them.

After we had left both villages, which Mr. Bodmer had hastily sketched, 61 we had on the right bank alternately gray clay bluffs and green lowlands; behind them prairie hills rose up toward the sky; here and there, several conical peaks. The green lowlands always have willow and cottonwood thickets. On the left bank now [are] barren, sandy expanses, also with willow thickets, before the prairie. The river turns to the left. On the left bank, gray bluffs as well, 30 to 40 feet high; thickets in the ravines. Soon lowlands with willows lie before the bluffs; the river turns right again, [and] thus the region varies.

Between three and four o’ clock, we again put in at the right bank to cut firewood. On landing I saw the snake with the orange streaks on its back (Coluber proximus Say) on a tree trunk in the Missouri. We remained for nearly an hour, and the interpreter Ortubise knocked a very fine large bat (probably Harlan’s Taphozous rufus) out of the air with his hand. Toward evening the wind subsided; it became very pleasant. And, as the sun neared the horizon, [a] magnificent landscape! A series of steep bluffs on the right bank was colored purple. Right and left, green thickets along the bank, [and] before us, beautifully varying hill shapes, including several conical domes, which reveal themselves far distant in the beautiful evening illumination. The wind had subsided. The river is rising; it carries tree trunks, branches, chips, and the like downstream. Later the evening turned cool. 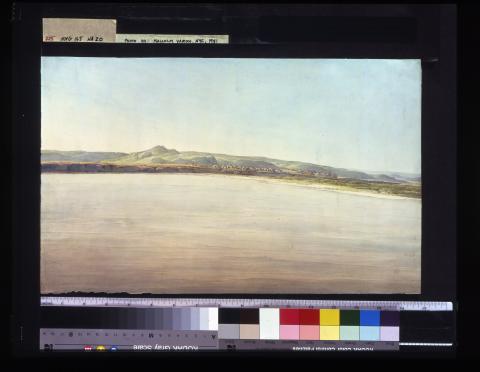