Sioux Indians came to the ship. Their faces were painted red; several had a white circle on their cheeks with a black spot inside; several, a black spot on their foreheads. Several had their faces in their natural color, with the forehead, chin, and area around the eyes [painted] red. The teeth of all of them, white as ivory. I have not seen any bad teeth among them. The eyes of some of them were pulled down somewhat in the inner corner, but less so than is often the case among Brazilians. For the most part, their cheekbones were very prominent. Their ears had large openings in the lobes with very long strings of blue and white glass beads, which hung far down, hence differently than was the case among the Indians seen earlier. Usually they also have another opening on the upper rim of the ear, and the strings hang there. Many were wearing very nice, wide neckbands completely and densely adorned with white beads, others with blue ones, and many, especially the women, had many sky-blue or white necklaces; they seem to like these two colors most of all. The woman whom Mr. Bodmer was drawing, a Teton—her name was Chan-Chä-Uiá-Te-Üinn (‘Ch’ velar, ‘an’ as in French, ‘in’ as in French, ‘Uiá-TeÜinn’ nasal)M11In German: "Woman of the Crow Nation." had a very nicely painted hide cloak; see the drawing in that picture. From one of the Indians, I bought a pair of moccasins on which the grizzly bear tracks were very clearly imitated with porcupine spines or quills. Yesterday Mr. Bodmer had painted a young Ponca whose name is Hó HóMä. He was a very handsome Indian.

In the evening we saw several Indians on horseback. They rode on a woolen blanket, and instead of a bridle, they had a leather strap tightly bound around the horse’s lower jaw. Major Mitchell presented me with a Blackfoot saddle, which is very nice and consists of two parallel pads or rolls of leather, decorated with colorful rosettes and bent upward in front and back.[Page 2:103]Here such saddles are called [— —], and they are commonly used. The cover is made of black bear hide and bordered with colorful cloth. In the evening the Indians drove in their horses, a whole herd, since they must always anticipate an assault from hostile Indians who are especially after horses to steal. All the Indians now living here on the prairie prai - rie have large numbers of horses. The local Indians belong to the Yankton, Sisseton, Teton, and Yanktonai tribes. For the most part they are related to the whites that live here. Yesterday we had not attended the dance, and this seems to have offended some people. In the evening Dreidoppel and Mr. Bodmer again saw a wolf on the prairie. Evening calm but very cool. Today we killed a fine pair of common ravens.M12Corvus corax amer. 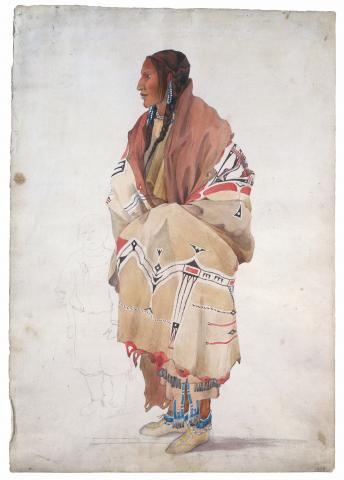 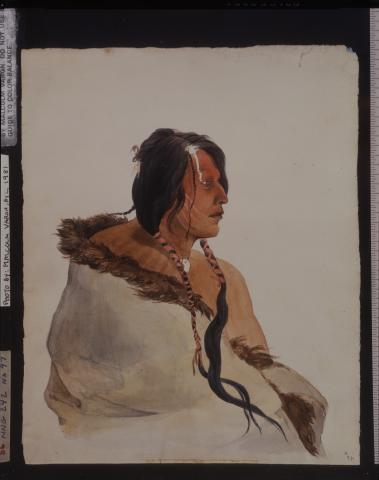