8 May: In the morning, beautiful, clear, pleasant weather. The region rather uniform. We saw a wild goose with four young ones, which simply could not be driven off. Finally, to the right, the first tall bluff since Ard Hills appears; it forms distinct green, quite unusual ridges, which rise above the woodlands on the bank. Here we struck bottom several times. At 7:30, 64°F [17.8°C].

The edge of the bank is low on both sides; cottonwood forest to the left. On one of the hills to the right, which rises

like a roof above the wooded embankment and which we reached twenty minutes before ten o’ clock, Sergeant Floyd, of the Lewis and Clark party, who died here at that time, is buried.[Page 2:60] The grave is right on the top of the ridge and marked with a short staff, which is often replaced by the whites when it has been consumed by prairie fire. This Floyd was from a good family, a nephew of a governor of Virginia.

The green hills, or ridges, continue farther upward. Somewhat farther upstream Floyd River, or Creek, emerges. In the forest on Floyd Hills, one notices individual conifers. The forest before the hills extends up to Floyd’s Creek, along whose upper bank only a narrow border of willows and then a beautifully green prairie extends, with gradually green hills in the distance. It is a brook weaker than the Windbach; ducks were swimming on it. At the same time, many wild geese on the Missouri. The green carpet of the prairie was magnificent; in it, individual small thickets in the distance. The opposite bank [is] low, with cottonwood forest. On the bank to our right, the forest soon begins again, some of it tall and picturesquely wild. Ducks and sandpipers along the shore; above the prairie hovers a white forktail, undoubtedly Falco furcatus. Along the bank steep green hills now appear intermittently again; below, along the bank, limestone banks and large limestone boulders; earlier a small creek emerged. On the hills some tall yellow bluffs follow; in their rocky notches and hollows, some of them very deep, countless swallows were building their nests and swarming about them. Strips of forest along the bank alternate with yellow bluffs; a long wall now appears, the upper edge of which is gently rolling. Thickets in the small ravines. To the left we have a slew, which separates a large, sandy island from the shore. Not far above the tall bluff, a half hour from Floyd River, the Big Sioux River empties: willows and cottonwoods along its banks; ducks on its surface. It is small now, about 60 paces wide, and navigable about 100 miles upstream with mackinaw boats.M34Along one small river that empties into the Big Sioux about 40 miles upstream, the red pipestone [catlinite] from which the Sioux make their pipes is quarried. The Sauks and Meskwakis call this small river Pipe River.

About 120 miles upstream live the Sioux, or rather Dacota, band (as this nation calls itself), known by the name Wáhch-Pekúteh (pronounced as in German).M35“Those who shoot at a leaf.” They and another band of this nation on the Mississippi plant Indian corn; all the others do not. Those along the Mississippi live in the vicinity of Lake Pepin. Here along the Big Sioux River begins the actual land of the Sioux.M36Their enemies, the Ojibwes (Sauteurs of the French), call the Dacotas Nandoési, from which [the name] Nadowessi, as Carver and others call them, has been derived. Before 1830, in July, when the above-mentioned land purchase was concluded, it extended even farther down.

From here on the strips of forest changed The water of the [Big] Sioux River differed significantly in color from that of the Missouri. The hill chain now recedes again from the shore, and alluvial soil forms the bank of the Missouri. The river turns left and soon to the right. The region is flat; on the horizon one sees willows and cottonwoods as well as several rows of prairie hills. Behind us to the right, one still saw the green hills along the Big Sioux River, which we later closely approached again through the big bends of the river. On the large wide sandbar to the right, we saw swarms of wild geese and ducks. A strong wind drives the sand from the banks into the air. At twelve o’ clock, 75°F [23.9°C].

After lunch we wanted to take on wood on the right bank, but because of the lack of water it was not possible to land. Farther on we found shallow water [and] drifted back; while the boat was taking soundings, [we] lay to at a sandbar to the left and cut up driftwood. The wind was so strong and the air so full of dust that one could not see. All articles of clothing, even in the cabins, were full of sand and dust.[Page 2:61] The sand on the bank was covered with individual young cottonwoods or willows about one foot high [and] scattered about; [these] grow up and soon provide the forestation usual in the first phase here. Old driftwood trees lay half buried or blown over in the sand. Bodmer ran toward the somewhat distant forest, but the bell called him back too quickly; we had remained in the vicinity.

Half an hour later, we continued our voyage. The river forms a vast, broad expanse where we again had the green hill chain of the bank remaining to our left ([technically] the right one) before us. Geese flee in pairs in all directions. Sandbars distant and low; tall woodlands form sharp divisions and gradations. The wind is so strong that it completely clouds the distant horizon and so violently agitates the water that the pilot cannot readily discern sandbars and logs. To the left we reach a beautiful forest on a tall bank; to the right, extensive sandbars, completely overgrown with vegetation, with most picturesque gradations of willows and cottonwoods. Somewhat farther, splendid cottonwood forest on the bank; here we put in before dusk.

At once the woodcutters began their work in all directions. After we had climbed the steep bank, which, with the forty to fifty woodcutters, looked like the scaling of a fortress wall, we plunged into the forest of cottonwoods [and] narrowleaved willows, [with] very few other species of trees. The understory was of various kinds, though with no great diversity. Vines covered with flower buds entangled the shrubs, and the red willow (Cornus sericea)M37(Bois rouge). also grew here abundantly. We followed the riverbank and came onto a small prairie, where we tracked elk (Cervus canadensis) as well as ordinary deer.

In the north the lightning was very intense [although] the wind was no longer so powerful. The wild geese called on the river, but the whippoorwill was not yet calling today. Dreidoppel shot Tringa pusilla Wils. on the shore, and in the dark Mr. Bodmer went so far that he could hardly find his way back to the ship. At 8:30 several thunderstorms arose—[though] the temperature was very pleasant [and] mild, the thunder and lightning were very violent. The rain poured down; the lightning bolts were most majestic. Round about, they illuminated the entire horizon as bright as day and on a brilliant, fiery background flashed long, zigzag lines of lightning bolts that encompassed half the horizon. The thunderstorm continued for a long time, accompanied by only a mild wind. With the coming of night, the storm advanced full force. 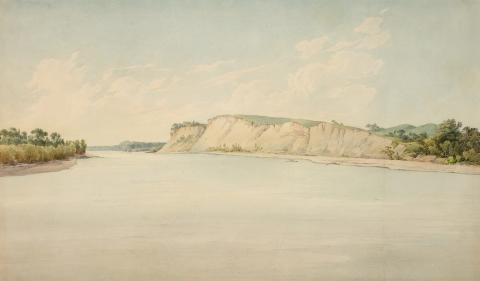