30 May: Early in the morning, dreary rainy weather, also cool and windy. At six o’ clock wood is brought in from the left bank.[Page 2:99] Here in this region several hundred horses belonging to Fort Pierre (Little Missouri) are grazing. There were three white men and several Indians; they had put up a leather [tipi], which stood close to the bank. We obtained fresh antelope meat from them, for they had shot three of these animals.

At seven o’ clock we had Simoneau’s Island (Elk Island on Lewis and Clark’s map) to the right. It is covered with a tall, freshly green cottonwood forest. At 7:30, 54°F [12.2°C]. The keelboat is untied from our steamboat [so that] we will sail faster. Half an hour farther along the hills [are] remnants of Dacota graves — individual poles. The hilly region continues in the often-mentioned manner: black bluffs and black and grayish yellow hills always alternate; along the banks, lowlying land wooded with narrow-leafed willows and cottonwoods. On the right bank, a very dense, tall forest of cottonwoods and willows, then intermittently extensive prairies with the unusual hills behind them.

Between eleven and twelve o’ clock, we halt at the right bank and cut wood. Here there was a border of lofty, airy trees on shore; behind [that border], the vast prairie with tall grass, which extended as far as the hills about 1 1/2 miles away. The hunters immediately combed this plain, and the many woodcutters were occupied in the tall timber. Here a plant with somewhat pulpy leaves called lamb’squarters ([— —])M86Called belle dame by the French. grows everywhere; we ate [this] every day, cooked like a vegetable. Across the river there were thickets and tall trees in several places behind which the hills rise; sandbars in the water. At twelve o’ clock, [— —] °F. Beautiful view looking back toward the river. Interesting gradations of the unusual hill chains.

Right after lunch we move on. After about one and one-half to two hours, cultivated fields to the right in the forest, where there are ten persons and much piledup wood, much of which we load. To the left, naked, blackish, steep clay bluffs; this clay is infertile. We run hard aground, though [that causes] no delay. It is about 8 miles from the felling area to Fort Pierre. At three o’ clock, a violent shower. On the left bank [are] extremely striking blackish earth hills, as though artfully stratified: rounded off on the landward side, partly concave on the side toward the river, and with a sharp edge above; often they are cut off in a completely vertical manner. Strange vegetation with all kinds of foliage colors: green, bluish, yellowish. Several islands in the river; their names are different from those of Lewis and Clark. We strike bottom.

At 5:30, after running aground several times, we reached the mouth of the Teton River, or Little Missouri, which issues from willow and cottonwood thickets. The Dacotas call it Uatpáh-Sitscha (Bad River). It rises in the Black Hills and has a long course with many bends; it flows in a straight direction for 150 miles to its outlet. In the Missouri there were broad sandbars; a snow-white flock of pelicans sat close together on the water. They do not nest here but move on. Before us, an island which has no name; straight across from it, on the left bank, is Fort Pierre, where Mr. Laidlaw, a partner in the Fur Company, resides. When the French Fur Company still existed, it had a fort immediately above the mouth of the Teton River. M87The Mandans call this river Mönichä́h-Pássahä (‘ch’
velar); the Hidatsas, Biddi-Schu-Wáh-Ahji (strong stress on ‘wáh’ and ‘áh’); the Arikaras, Sih-Sawíh-Tii (Standing Water); the Crows, Benin-Dätä́ (exactly like German, ‘e’ full quality). Later, when the companies merged, they built Fort Tecumseh somewhat farther upstream on the bank on the prairie and [then] Fort Pierre (named after Mr. Chouteau) still somewhat farther upward. On the hills to the left we saw an Indian grave in the distance. The Missouri is quite wide at the mouth of the Teton; here it has broad prairie lowlands with a border of cottonwood and willow.

Beyond the sandbar that lay before us, we saw the flag waving in the fort; ours, too, were hoisted. The fort peers out from the trees on the bank and is impressive. A small Sioux village of thirteen tipis is located near it to the left and, with its conical points, affords a singular sight. Our small cannon were now fired, and the fort responded with a powerful running volley. Finally, small arms fire began on our deck as a salute.[Page 2:100] The vast, now beautifully green prairie afforded an interesting view. In the distance it was bounded by its unusual hill chains; closer to us horses and cattle were grazing; still closer to shore stood several Dacota graves of two different kinds. Before we reached the landing place of the fort, we saw on the bank an old, dilapidated building, the only remains of Fort Tecumseh.

Ten minutes later we landed at the landing place of Fort Pierre on the fifty-first day after our departure from St. Louis. M88Arrival at Fort Pierre after a journey of fifty-one
days (1,264 miles from the mouth of the Missouri.) The entire population—several hundred persons, including many Indians—stood on shore; the greeting began. Some of the Indians, most of them wrapped in wool blankets, had their guns in hand; they had joined in the firing. We saw Mr. Laidlaw and also Mr. Fontenelle, who had ridden here comfortably in eleven days from Bellevue by land. He was about to undertake a journey to the Rocky Mountains. After the steamboat had landed, we proceeded with a large escort to the fort, to which a straight path led in about five minutes. We entered Mr. Laidlaw’s house, where we relaxed before a good open fire, and then climbed the small tower of the only blockhouse finished [to date]; from [this], or from its gallery, there is a beautiful view over the vast prairies. The Dacota [tipis] are located behind the fort, and one of them, in which the interpreter Dorion lives, is painted red and multicolored. We spent several hours at Mr. Laidlaw’s [and] saw some interesting Indian pipes and implements. We returned with a large escort to the ship, where Little Soldier and I smoked a pipe in the Indian manner. The evening was magnificent, and the full moon was shining clearly over the vast prairie. 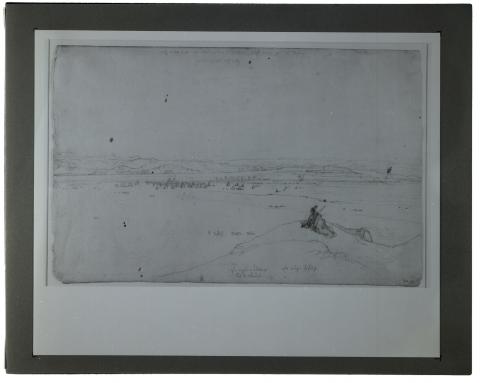