14 May: In the morning, pleasant, slightly overcast sky; at eight o’clock, 58°F [14.4°C]; already at nine o’clock, strong wind again. The river was so shallow that we were hard aground less than a half hour [upstream] from our night quarters. We tried in every possible way to get away; the boat made soundings. At 11:30 we saw the Assiniboine behind us. A keelboat was sent to make it lighter. Also by this time, somewhat more water had been found near us, and an attempt was made to get away. We fastened a rope in the forest [and] let the steamboat swing around.[Page 2:75] Then we moved back to where the Assiniboine ran past us, and we followed it along the right bank. Just at this time, at twelve o’clock, 69°F [20.6°C]. Soon the engine stopped again, and we put forty men out on the right bank to lighten the ship. To the right we now had two small towerlike boulders, which we had already seen last evening. During the noon meal, we succeeded in moving across the sandbar, and the Assiniboine stayed behind.

On land along the bank, someone had caught a soft-shelled turtle (Trionyx muticus Lesueur) in the grass, which I received alive. Someone also brought in complete samples of the wild turnip [-—], the roots of which were nearly as thick as a goose egg; it is said to occur only here along the Missouri. Its flowers were now open, mostly light blue; a few here and there, however, [were] white.

The region before and behind us was most delightful; beautiful hills, several of which were significantly high. The Assiniboine was giving off smoke behind us. To the right and left, fresh, green willow thickets; behind them, cottonwood trees. Farther on to the left along the bank, there were very steep, barren gray hills, almost devoid of vegetation, several isolated, half-withered trees excepted, since most of the grass is dry and sparse. In the ravines there is nice, fresh green grass. However, only a few hills are covered in this way, [while] farther on they are beautifully green.

Sandbars again detain us; we were aground close to the [sand] bars when five gulls (Larus) flew over us down the river. Finally the channel was found, and we moved through a narrow arm of the river along the left bank; [it was] about 20 feet high [and] eroded. Here the hills again have a steep, withered appearance, [with] burned trees and underbrush at several places; at others, a vivid green with nice bushes and plants. Several burrows of tunneling animals, perhaps foxes or marmots (ground hogs), in the hills; Prunus padus virginiana covered with blossoms on the bank. To the right and before us, an amphitheatrical area, gradually rising [and] ringed by gentle hills; partly beautifully green, partly yellowish. Last year one saw the whole prairie here covered with bison herds; we have not yet reached them. A small creek on the left bank, beautiful thickets in its deeply cut-in bed. Individual cedars (Juniperus) everywhere on the steep walls of the hills along shore, some withered and deformed. Five wild geese (for a long time we had not seen any); also far fewer ducks. A nice little creek with picturesque thickets along the bank; here Picus erythrocephalus is very common.

Now steep gray and yellow bluffs again follow; on top of them, thickets and red cedars. We catch sight of a canoe coming down the river with four men [in it]. Well armed, Mr. McKenzie goes to see who it is. He brings back the report that the Indians up along the Yellowstone River have killed seven of his men.M55This report needs to be corrected. Only three persons were shot to death, including a certain Glass, an old man who had spent his whole life as a trapper in the dangerous Indian regions and had often been wounded by them. Mr. Hamilton has composed a biography of this interesting, experienced old beaver trapper based on his own account. As a result of this murder by the Indians, two of the same Indians, Arikaras, were killed. I brought back the scalp, or head-skin with hair, of one of them.

In the bluffs to our left, we see a wild ravine with uprooted cedars. Before the hill below us, scenic bushes now appear on the bank. Prunus padus, Cornus sericea, Rhus, ash, oak, box elder, elm, hornbeam, cottonwood, and willow, [all] intertwined with vines; then come tall, slender cottonwoods, slender and shady. In the river before this bank [are] numerous trunks and brushwood; part of the shore [was] badly damaged. A few coots on the bank. Some of the underbrush above is entangled in the shape of an arch, so that one believes one is looking into leafy passageways. Before us there is now a large willow and cottonwood island: green all around the bank [and] in the background, an amphitheater of beautiful hills; a scenic landscape.

Before the island we run aground; the boat makes soundings. The five gulls again streak upriver. It begins to rain. [Once] the channel was found, the ship was moved backward and went to the right up along the island.[Page 2:76] Behind the forest on the left bank [are] high, bare, partly green, partly gray hills; farther on, above the light-green forest on the riverbank, [are] dark, blackish green cedar thickets, above which the beautiful domes rise, a very scenic view. On the island, which had a steep, eroded bank, one saw trees that had been felled by beavers; the stump is always gnawed off in the shape of a cone, and the tree is toppled at an angle. 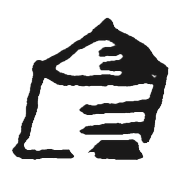 Vast wilderness; the trees are wildly bent and broken in an entangled manner. Large swallows fly about above the island. Farther away there is another island; opposite [this], on the right bank, there is said to be a thermal spring. The water does not have a mineral taste.

We sailed to the right toward the bank; here there were low hills along the bank, where the buffalo berry as well as ash, cottonwood, and red willow commonly grew along the edge. On the hill slopes there were several burrows of tunneling animals. Hills covered with nothing but dry grass rose above these small thickets; they were always bare on the front side of their domes and hence did not have any grass—proof of infertile soil and of raw weather during winter. Among the domes of the hills on the left bank there were several most singular ones: one dome had the shape of the Inselsberg in the forest of Thuringia near Gotha; another virtually had the shape of the Hochsimmer near Mayen between Bonn and Koblenz on the Rhine.

These vast, lonely wildernesses along the Missouri provide an interesting comparison with those of Brazil: in the latter there is life and abundance of nature everywhere. Here, by contrast, one scarcely sees any live animals. An unyielding, quiet solitude prevails, [and] only scattered hunting parties of Ponca and Dacota Indians occasionally spread signs of life. For a great distance, sandpipers are practically the only inhabitants of the riverbank. We see a tall, withered tree covered with swallows, as well as Picus erythrocephalus and Columba carolinensis.

On the left bank [is] tall timber and then a prairie with traces of Indian lodgings. Last fall Mr. Mc Kenzie came upon an encampment of Ponca Indians here.

(This place is about 5 or 6 miles below Cedar Island.) Remarkably shaped hills and stunted forests to the left; [among] the hills to the right there is one that resembles a fortress. Later, a long series of steep black bluffs appears along the shore to the left: initially with a completely black upper, or head, stratum; then blackish, interwoven with completely horizontal fine white linear strata, which are barely an inch wide; two fine lines like these separated by about one foot; then, just as far below them, a third [and] occasionally a fourth stratum down below, just above the water, mixed with a rusty red layer, possibly containing iron. Several places were burned black, unmistakably so; I was also told that the strata burned and that farther upstream this is still the case. Unfortunately, I could examine all these riverbanks only from a distance.[Page 2:77] Several places had toppled boulders; a grotto or cave, which, however, was not large; here there were [also] cave-ins, perhaps coal slate or sulfur-containing strata.

At six o’clock, pelting rain and strong wind. Now there arose a sudden noise so that we believed we were seeing bison herds, but there were only trees, which we had mistaken for them. After the rain the evening turned calm and pleasant; the singular hills all around were illuminated with the most beautiful, equally singular, purple and flame-yellow colors. In the east there was intense lightning. We found so little water that we had to go back. [We] fastened the ship to the left bank for the night.